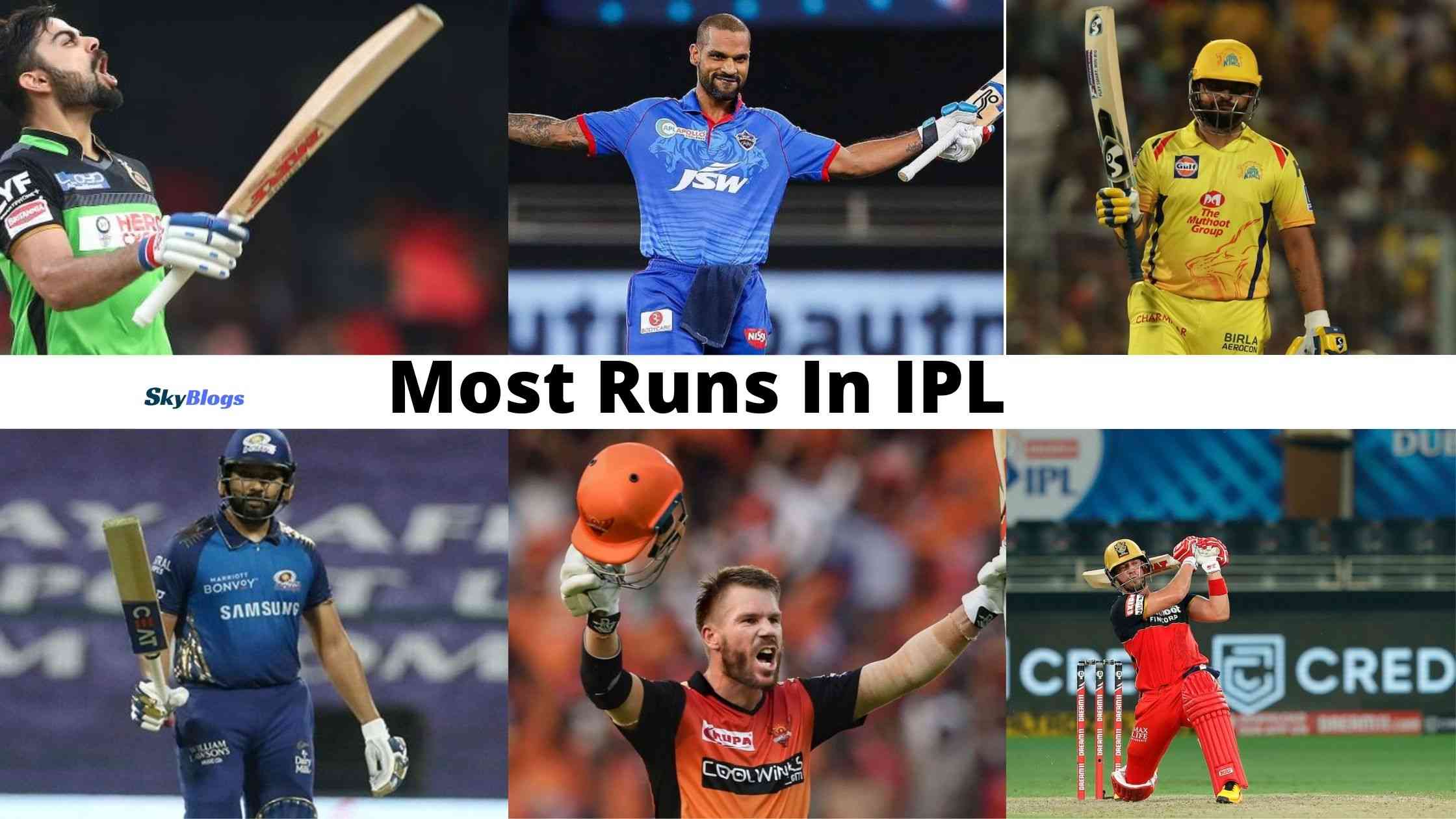 IPL is the best franchise league in the world among all leagues and the presence of all the best players in the globe asserts all about it. Batting in the Indian Premier League has been a bit easier compared to other cricket leagues on earth because of the flat wickets in this well-paid tournament. Over the years many cricketers have played in the IPL, but not everyone has been able to make an impact. In today’s article, we will read about the top 5 players with the most runs in IPL.

Most Runs In IPL By A Player

The flamboyant and fearless, top-order Indian batsman Virat Kohli gets 1st place in terms of scoring the most runs in IPL, with 6411 runs in 216 Matches (208 innings). Making his IPL debut for Royal Challengers Bangalore in 2008, Kohli has played all IPL games for RCB so far and averaged 36.43 in the event. The modern-day great also holds the record of amassing the most runs in a single IPL season, 973 runs in 16 matches in 2016. Unfortunately, despite being one of the best, Virat Kohli is yet to win an IPL trophy.

Explosive opener Shikhar Dhawan comes 2nd place on the list of most runs in IPL history, “Gabbar” has accumulated 6086 runs with a decent average of 35.18. Having a strike rate of 126.92, Shikhar has smashed 46 fifties and 2 centuries so far in the Indian Premier League. Currently, Dhawan made 587 runs in 16 games in the 2021 IPL . In the 2020 IPL, he became the 1st player to hit back-to-back centuries against CSK and Punjab Kings.

The current aggressive opening Indian batsman, Rohit Sharma has scored the 3rd most runs in IPL. In his 13 years of Indian Premier League career, Sharma has notched up 5764 runs in 221 games. Rohit is such a batsman if you don’t get him out early, he can whack the bowlers all around the park. He has been the best buy for Mumbai Indians in IPL, under his guidance Mumbai has worn the IPL crown five times, which is the highest by any team.

Ace Australian opener David Warner is the only foreigner, who has made it to the list of top 5 players with the most runs in IPL. Averaging 41.99, Warner has amassed 5568 runs in 155 innings. He started his career with Delhi Daredevils in 2009 and is now one of the best overseas players in the tournament. Warner led Sunrisers Hyderabad to their maiden IPL title in 2016. He has also made a unique feat in his name, winning the Orange Cap thrice (2015, 2017 & 2019), the most by any batsman.

Former Indian all-rounder Suresh Raina finds himself in the 5th position among the players with the most runs in IPL with 5528 runs in 205 matches (200 innings). The middle-order batsman has maintained an average of 32.51 in the competition, while his strike rate has been 136.76. Chennai Super Kings has succeeded in the IPL thrice (2010, 2011 & 2018) and Raina was a part of the team on all three occasions. In terms of scoring 2000 and 5000 runs, Suresh Raina is first in the history of IPL.

One of the best batters to ever play the IPL, AB DE Villiers holds the 5th position on this list. Having played 184 IPL games, the ace batsman has accumulated 5162 runs at an excellent average of 39.71, while his strike rate has been 151.68. AB has surpassed 50 runs mark 40 times in his career, however, he never had the privilege to win an IPL trophy despite being so awesome throughout the seasons.

Who has scored the most runs in IPL history?

Virat Kohli has scored the most runs in IPL history, 6411 runs in 208 innings.

Which player has made the highest run in a single IPL season?

Which batsman has smacked the highest score in IPL?

Chris Gayle has smacked the highest score in IPL, 175* off 66 balls against Pune Warriors India in 2013.

List of The Top 10 Players With Most Runs In IPL