IPL Week 4 CricViz Round Up Kieran Parmley takes a look at Chennai Super Kings’ progress this season, and what marks them out.

Reigning IPL champions Chennai Super Kings find themselves 9th in the IPL after eight games, all but out of the playoff hunt and staring down the barrel of just their second season outside of the playoffs in franchise history. Despite their lack of success, CSK haven’t really done anything different this year compared to last in terms of strategy, they managed to retain a majority of their 2021 winning side with Faf du Plessis, Josh Hazlewood and Shardul Thakur the big names they were unable to get back during the mega auction – their return to success could just be a matter of plugging in those gaps in the coming years combined with their usual strategies for success, which are generally unique to the rest of the league.

Since the start of IPL 2018 there have been 232 three over Powerplay spells from individual bowlers – 68 of them have come from CSK bowlers with 44 of those coming from new ball specialist Deepak Chahar – a notable absentee in their 2022 campaign and a player they value highly, fetching a 14 crore price tag during the mega auction. 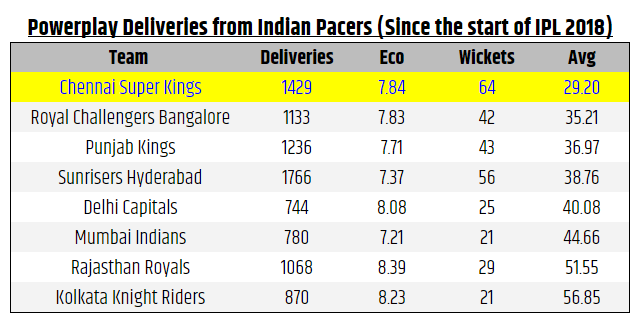 Only Sunrisers Hyderabad have outdone the Chennai Super Kings method of trusting local pace bowlers with the new ball in recent seasons in terms of overall volume, although Chahar in years prior and his replacement, left-armer Mukesh Choudhary this season, have offered greater success in terms of wicket taking up front – their bowling average of 29.20 in the Powerplay is comfortably the best in the league for local pace units.

It could be argued that giving local pace bowlers the new ball, and three overs of it at that, is the optimal deployment of local pacers considering the lack of consistent death bowlers and high pace options within the talent pool compared to the number of Indian pace bowlers who can extract movement early on – or at least that’s the CSK theory anyway.

Fleming’s side historically combine their new ball local pace bowlers with a reliance on overseas bowlers at the death, in fact only the Delhi Capitals overseas pace bowlers have bowled more deliveries at the death than CSK. Dwayne Bravo has become a mainstay in the setup alongside South Africa’s Dwaine Pretorius, who has stepped up in the absence of Hazlewood’s replacement Adam Milne.

The purchase of India Under-19 all-rounder Rajvardhan Hangargekar, as well as Dwaine Pretorius to cover for the ageing Bravo hints towards CSK continuing with their local new ball-overseas death pace attack in the future too, with Hangargekar picking up four wickets inside the opening 5 overs during the 2021 Under-19 World Cup – only his compatriot Ravi Kumar and Englishman Josh Boyden picked up more early Powerplay wickets during the campaign.

The local Powerplay pace method leads into another area of difference for CSK, turning to overseas spin. Giving the new ball to local pace bowlers as opposed to more premium overseas pace options allows Stephen Fleming’s side the freedom to use overseas spots on spin bowlers, perhaps rather controversially considering how the IPL generally overlooks overseas spin options. Only Sunrisers Hyderabad and Kolkata Knight Riders have bowled more overseas spin deliveries since the start of IPL 2018 – largely thanks to Rashid Khan and Sunil Narine – two of the world’s finest overseas spinners.

Chennai Super Kings however have gone for alternative, lower profile options, especially after moving on Imran Tahir – a more senior player who was preferred when CSK were able to doctor their home venue to suit their spin-heavy playing style. Sri Lankan off-spinner Mahesh Theekshana has made his way into the side this season, alongside New Zealand’s Mitch Santner, who is filling in for matchup bowler Moeen Ali – both Theekshana and Santner are spinners without too much mystery who instead offer the control and ability to bowl difficult overs inside the Powerplay and towards the Death overs, bringing an element of flexibility to the bowling unit for the fraction of the price local spin bowlers with similar qualities would demand at auction.

The switch of venues to Mumbai and Pune for IPL 2022 has perhaps reduced the effectiveness of this tactic but should the league return to the usual home and away method, CSK’s spin-friendly home ground could allow them to reap the rewards of purchasing quality spin bowlers such as Theekshana and Santner for low prices, as well as constructing a bowling plan which allows them to play without hampering the rest of their bowling combination.

The absence of left-right batting combinations

Using left-hand right-hand batting combinations has been a staple for two of the IPL’s more successful batting units since the start of 2018, with Delhi Capitals and Mumbai Indians both seeing left-handers face more than 40% of total deliveries – Chennai Super Kings are at the other end of the spectrum, however. 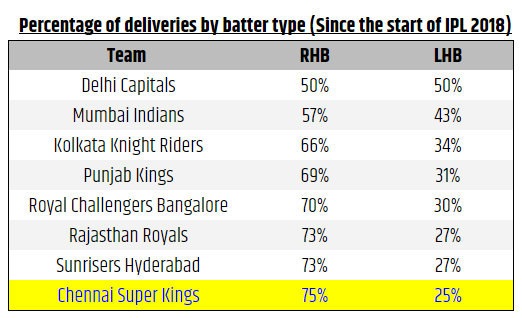 Just 25% of deliveries faced by CSK batters since the start of 2018 are faced by left-handers, the lowest percentage in the league. Despite this CSK have generally been quite safe when facing leg spin and left arm spin, away spin that generally troubles right-handers – in fact they have the highest batting average in the league facing right-to-left spin, albeit with a slight drop off in scoring rate. 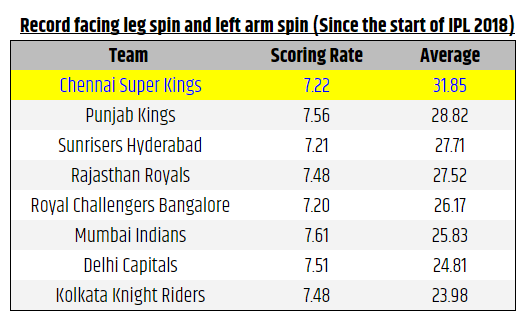 Chennai Super Kings don’t really conform to the general matchup theory, which suggests a left-right combination adds value when it comes to negotiating spin – instead they trust their local right-handed batters, the likes of Ruturaj Gaikwad and Ambati Rayudu who have good records against away spin, to go against the matchup grain and handle the Middle Overs – almost as ‘false’ right-handers. Alongside their right-handers, CSK have also used the likes of Moeen Ali, Sam Curran and now Shivam Dube as left-handed buffers in the batting lineup to prevent their right-handers from being overwhelmed by away spin, filling in the left-handed void Suresh Raina’s departure has left in the batting lineup.

This is a slight element of deception from CSK in the way they construct their batting lineup, opposing sides have often backed the away spin to right-handers theory, bowling on average 34 deliveries of right-to-left spin to CSK per innings, only RCB have faced more per innings since then start of 2018 – and yet CSK have continued to survive without heavily recruiting left-handers and in fact prosper at times without them.

Batting depth has often been a difficult talking point in T20 cricket, it’s hard to quantify when factors such as batting roles and the impact batting depth(or a lack of) has on the rest of the lineup are at play but in raw numbers – the batting production of their lower order – Chennai Super Kings have been the batting depth frontrunners in the IPL since the start of 2018. 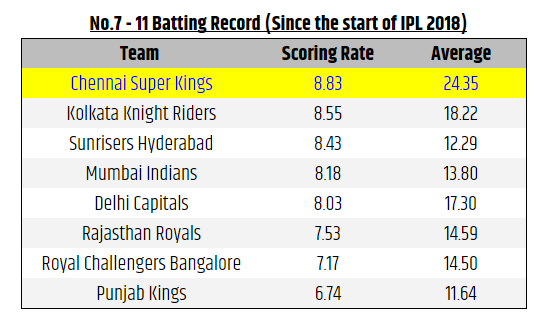 CSK’s recruitment policy has generally prioritised all-rounders in recent years, Sam Curran and Moeen Ali have come in alongside Ravindra Jadeja to form a competent bowling unit when used smartly and have been key parts to providing batting depth alongside bowlers-who-can-bat types in Dwayne Bravo and Deepak Chahar.

Batting depth isn’t the be all and end all when it comes to team construction as Rajasthan Royals are trying to prove differently in IPL 2022 but in CSK’s case it’s another area where they tend to differentiate from the rest of the league and an area which has been a strength during title winning campaigns, with Jadeja having a sensational season down at No.7 that pushed him back into India’s T20 setup.

Chennai Super Kings are a hard team to pin down – they do things differently and at times don’t conform to what is generally considered the status quo in the IPL, things haven’t gone to plan for them this campaign but perhaps next season, or in future seasons to come, their points of difference will become their strengths once again – to panic and switch to normality is not in CSK’s nature, they’ll continue to do it their way.