The Rise Of Matty Potts, The Latest Quick Off Durham’s Production Line 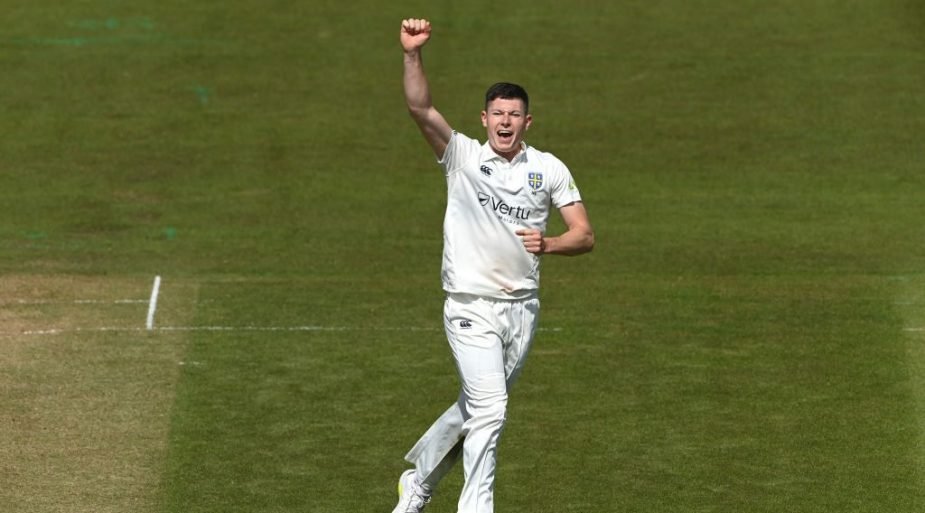 Matty Potts has had a scintillating start to this year’s County Championship. The young Durham quick speaks to Yas Rana about his story so far.

As ever, all eyes were on Ben Stokes. The newly appointed England captain was in town making a rare appearance on the county circuit, just his fourth in the County Championship in the last five years. The new king had come down to meet his subjects and the eyes of the English game were watching.

And as he so often does, he put on a show, launching a devastating assault against an inexperienced Worcestershire attack to grab the headlines. But while his performance was the match’s most thrilling and eye-catching, it wasn’t the most intriguing.

That accolade belonged to 23-year-old Durham quick Matty Potts, who claimed his third six-for of a breakout season in the County Championship. In stark contrast to recent summers, the glut of run-scoring and hundred-making in the country has made those taking regular wickets stand out. Whether it is as simple as a concerted nationwide effort by groundstaff to improve pitches, an unusually dry April or a slightly less pronounced seam on this year’s batch of Dukes, new England managing director Rob Key has got his wish – batters are scoring big runs.

After the fifth round of fixtures, no English seamer has as many wickets in the County Championship as Potts, who leads the wicket-taking charts in Division Two. It is the way he bowls that gives cause for excitement as much as the volume of wickets. He’s sharp – bowling in and around the mid-eighties (mph) – and relishes the role of taking important wickets on flat pitches. Add in his 6ft 2in frame and you’ve got plenty to work with.

In recent years, English cricket hasn’t produced many bowlers capable of opening up games on lifeless surfaces – Potts may be one who can. In his six-for against Nottinghamshire earlier in the summer, five of his wickets were either bowled or lbw; he also claimed the first four wickets to fall. Against Worcestershire, he took six of the first seven dismissals.

“These pitches [this summer] have been a lot flatter than we have seen and batsmen are playing really, really nicely,” Potts tells Wisden.com. “The main thing is to extract whatever it is in these wickets, whether it be variable bounce or a little bit of seam movement if there is any. You’ve just got to be hitting the pitch hard, every spell, ball after ball. That’s something I’ve had to learn.

“You can’t try and just bowl the same ball that’s floaty and full because you will get punished. These batsmen are punishing [bad] balls. You’ve got to bowl hard and hit the pitch as hard as you can and that’s something the likes of Stokesy, Woody and Carsey do very well.”

There is something unEnglish about him, not only in how he bowls but in how he thinks about the game, too. There’s little time for conservatism. “I think sometimes you can think about economy rates a little bit too much,” he adds. “Personally, I try not to think about them at the start too much, especially with the new ball. Ultimately my goal is to take wickets. If I go at four, four and a half an over but take two wickets in that spell, my job is actually done.

“And then later on during the middle, when it’s a little bit flatter, batsmen are getting themselves in, you can apply another skill of keeping the economy rate low, putting the batsmen under pressure and taking wickets that way. In an opening spell, you want to try to put economy rates out of your mind and focus on taking those early breakthroughs.”

Potts hasn’t always been a fast bowler. For much of his youth, playing club cricket for Philadelphia CCC and Washington CC in the North East, he was a batter before coaches took a look at his dad – who stands at 6ft 8in – and realised that bowling seam was the way to go.

It’s not been plain sailing for Potts since he first broke into the Durham first team in 2017 as a wiry outswing bowler. The next couple of years saw him spend a considerable amount of time on the physio bench, and while he impressed in white-ball cricket – he was Durham’s T20 player of the season in 2020 –  a route into the red-ball side wasn’t quite as straightforward. Potts didn’t make the first Durham squad of the 2021 season; temporarily stuck in a queue of excellent county seamers, his non-selection focused the mind and gave him something to put right.

“I didn’t make the first squad last year and I was gutted by it,” said Potts. “I didn’t quite make the cut. It took me a while to break back into the team. I said to myself, ‘I’m going to be in that team. I’m going to force myself into that team’.” He’s become fitter, faster and not looked back.

A Test cap is the pinnacle for him, and should he continue doing what he’s doing, it could become a reality one day. Stokes may have to steal the headlines away from Potts in an England shirt too.