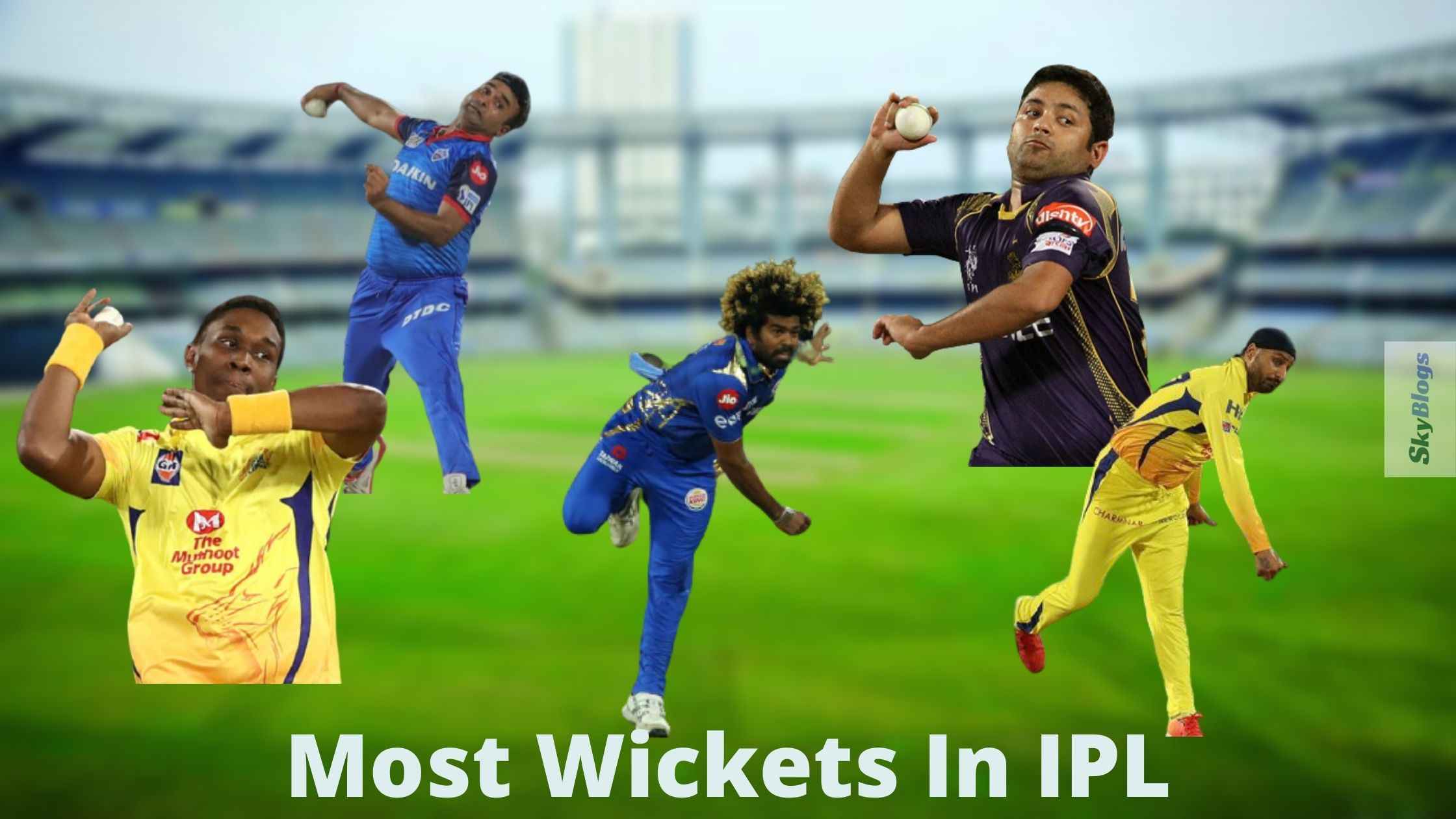 Making your name in the Indian Premier League by bowling is always a matter of excellence. IPL is played mostly on flat pitches across India, Where the surface doesn’t help too much. A bowler has to be competent enough to get wickets in IPL. Usually, bowlers with an ample amount of variations have succeeded in this cash-rich franchise league. Among the top 5 bowlers, two fast bowlers and three spinners have made it to the list of the most wickets in IPL.

Most Wickets in IPL By A Player

One of the premium all-rounders of T20 Cricket, Dwayne Bravo gets the top position on the chart of most wickets in IPL, grabbing 181 wickets in 156 innings. Bravo has all deliveries in his armory like slower, cutters, yorkers, and stock ball, but mostly he bowls with the old ball. His bowling strike has been 17.0, while the economy rate is 8.38. Bravo has won the purple cap twice with his spectacular bowling in 2013 & 2015. One team can rely on his batting also, as he is a decent hitter of the ball also.  In 2022 IPL, Bravo surpassed Malinga to become the leading wicket-taker in IPL against Lucknow Supergiants.

Veteran fast bowler from Sri Lanka, Lasith Malinga finds himself in 2nd place on the chart with 170 wickets in 122 matches. Since the maiden IPL season, Malinga has been one of the important players for Mumbai Indians. He has the best bowling average in IPL history, 19.80. Malinga has won many matches single-handedly for Mumbai in IPL, who doesn’t remember the final of IPL 2019, 9 runs were needed in 6 balls, and Malinga defended it to take his team home. His career-best 5/13 came against Delhi Daredevils in 2011 at Arun Jaitley Stadium.

Indian leggie Amit Mishra comes in 3rd place in terms of taking most wickets in IPL. Mishra has scalped 166 wickets in 154 matches at a strike rate of 19.54, which is 3rd best among bowlers, playing more than 120 games. Amit Mishra is the only player in the Indian Premier League to grab three hat-tricks against Deccan Chargers, Punjab Kings, and Pune Warriors India respectively. So far, he has represented three teams in IPL (Delhi Capitals, Deccan Chargers & Sunrisers Hyderabad).

Current Indian wrist spinner, Yuzvendra Chahal occupies 4tth place on this list. Chahal has bagged 158 wickets so far in 123 matches at an impressive average of 21.44. The spin wizard’s best bowling figure is 5 for 11, including a hattrick, which came against KKR in the 2022 IPL.

The Uttar-Pradesh-born leg spinner Piyush Chawla is the 2nd leg spinner, who has made the cut to the record book of most wickets in IPL. Being a part of the Indian Premier League of 4 different teams, he has had 157 scalps in 165 games with an impressive average of 27.32. He is known for his exceptional googly bowling. Along with being an effective bowler, Chawla is a handy batsman also, he hit the winning runs for Kolkata Knight Riders in the 2014 IPL final.

Current Indian off-spinner, Ravichandran Ashwin occupies the 6th spot in terms of taking the most wickets in IPL, with 153 wickets in 177 matches. In his 13 years of IPL career, Ashwin played for franchises- Chennai Super Kings, Delhi Capitals, Kings Xi Punjab, and Rising Pune Supergiants. The spinner from Tamilnadu can bowl off-spin, leg-spin, carrom ball, googly, you name it. Despite taking fewer wickets than matches, his economy is something that sets him apart from others, 6.94.

One of the best swing bowlers of India, Bhuvneshwar Kumar gets 6th place in terms of taking the most wickets in IPL. In 141 IPL games, Kumar has bagged 151 wickets so far at a decent strike rate of 20.89. Kumar was the Purple Cap winner for consecutive years (2016 & 2017).

Indian off-spinner Harbhajan Singh has also had an excellent IPL career. He is someone who has been playing from the very first edition and has made 150 wickets in 160 innings in his name. Harbhajan Singh is one of the luckiest players, who have won the title four times (2011, 2013, 2018 & 2019), thrice with Mumbai Indians and once with Chennai Super Kings. In the 2021 IPl Season, KKR bought him for 1 cr rupees.

Caribbean all-rounder, Sunil Narine holds 9th place on the list of taking the most wickets in IPL. Narine has been playing for KKR for 10 seasons now, scalping 150 wickets in 144 matches. Narine’s variations make him the toughest to hit in the T20s. Narine has maintained an impressive economy of 6.65, which is one of the best in the Indian Premier League history.

Who has taken the most wickets in IPL history?

Dwayne Bravo has taken the most wickets in IPL history (181).

Which bowler was the highest wicket-taker in IPL 2020?

Delhi Capitals seamer Kagiso Rabada was the highest wicket-taker in IPL 2020 with 30 wickets in 17 games.

Who grabbed the most wickets in IPL 2015?

Dwayne Bravo from CSK grabbed the most wickets in IPL 2015, 26 wickets in 16 innings.

List of Top 10 Bowlers With Most Wickets In IPL

IPL 2022 Play-off Scenarios: What Each Team Needs To Do To Qualify