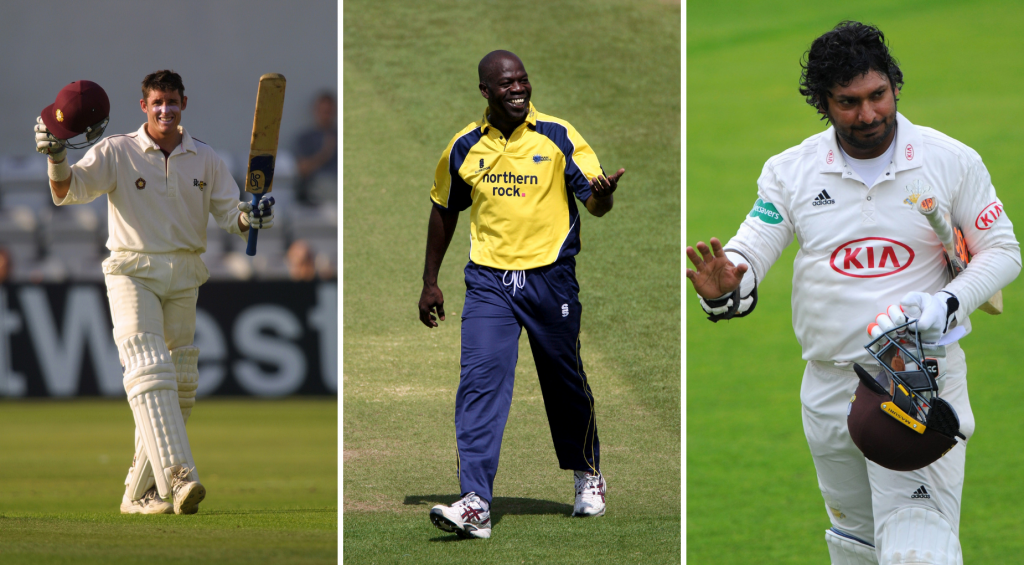 The County Championship has a long and famous history of some of the greatest players in the world coming from overseas and competing in the competition.

Below is our selection for the greatest County Championship XI of the 21st century, made up exclusively of those who have come from abroad.

The selection criteria for XIs such as these are to pick six batters, a wicket-keeper and four bowlers, and only performances in the County Championship have been taken into account. Honourable mentions go to the likes of David Hussey, Martin Love, Shane Warne and Danish Kaneria who narrowly missed out on selection. Others players who narrowly missed out area also mentioned below when explaining reasons for our picks.

Rogers seemed destined to be a member of the one cap wonder club in Test cricket, as at 36 years old his Test debut – made as a 28-year-old against India – remained his only appearance for his country. But, with Australia playing an away Ashes series and searching for an option at the top of the order who had experience in England, few were better placed than Chris ‘Buck’ Rogers, who had spent the previous decade plundering runs in the County Championship. During his career Rogers scored 35 domestic hundreds in England having played for Derbyshire, Leicestershire, Northamptonshire, Middlesex and Somerset across 12 years, captaining for many of them, and averaging more than 50 for every team bar Somerset. Rogers’ reward would be two years at the top of Test cricket, as he ended his career with 25 Test appearances at an average of 42.87.

Di Venuto was a regular in the County Championship from 2000 to 2012 where he had seven years at Derbyshire before moving to Durham for another six seasons. In that time Di Venuto scored close to 14,000 first-class runs and was a key member of Durham’s title-winning sides in 2008 and 2009. For Derbyshire, he scored 7,256 runs at an average of 49.02 including 19 centuries. Whilst for Durham, he scored 6,547 runs at an average of 52.79, hitting 18 cenuturies. Di Venuto would never win a Test cap for Australia, but their loss was the County Championship’s gain and Di Venuto would go on to win the competition too as a coach with Surrey in 2018.

If the theme of this batting line up isn’t already clear, then the pattern is now surely emerging. Phenomenal Australian batters who found themselves outside of that Test team in the early 2000s, so instead spent their time piling on domestic runs in England instead. And Stuart Law was arguably the king of all who fit that criteria. From 2000 to 2009, the Aussie one cap wonder scored 10,547 runs in the County Championship at an average of 55.8.

Before Michael Hussey debuted for Australia in 2005, he spent five summers as an overseas in the County Championship where he had stints with Northamptonshire, Gloucestershire and Durham. And what’s more, of all the batters to score more than 3,000 runs in the Championship between 2000-2009, none averaged more than Hussey, not even Mark Ramprakash. In 59 matches Hussey scored 6,647 runs at an average of 73.9. He batted on 103 occasions and on 43 of them he passed a half-century. 19 of which he converted into a century. 2005 would be the last year Hussey played in England domestically however, as he then proceeded to take the international game by storm and returned only when playing for Australia.

The first non-Australian in the side – though he did spend his teenage years Down Under – and a Sussex legend. Murray Goodwin played for over a decade for the south coast side before finishing his career with two seasons for Glamorgan. Goodwin scored 48 centuries for Sussex in a career where he hit 14,572 first-class runs for the county. Between 2000-2009 he was the second leading run-scorer in the competition with 11,202 runs (Mark Ramprakash was first with 14,017). Goodwin was a key part of the team that won Sussex their first ever County Championship title in 2003 and holds the record for the highest score by a Sussex player of 344* that he scored against Somerset in 2009. An innings that beat his own record of 335* that he had set six years earlier.

We’ve had to cheat a little here as Sangakkara did not keep much during his time at Surrey. But such was Sangakkara’s dominance in the three seasons he spent with the club between 2015-2017 to go along with a stint at Durham in 2014 and Warwickshire in 2007 he was too hard to ignore. For Surrey, Sangakkara scored 3400 runs at an average of 62.96 and hit 14 centuries in 57 innings for the club, including his 100th in all formats. Other contenders for the gloves were Andy Flower and Nic Pothas.

The first of two spinners in the side, it was a choice between Simon Harmer who has spearheaded the present day Essex attack that has made them the most successful red-ball side in the country and the great Shane Warne who played for Hampshire at the start of the century. Warne’s numbers for Hampshire were fantastic, taking 276 wickets at 25.58, but Harmer’s record of 312 wickets at 21.02 and impact on the team as they won the Division One title in 2017 and 2019 as well as the Bob Willis Trophy in 2020 meant he edged it. A great dilemma to have.

Gibson is now famous for his coaching credentials, having been involved in the England set-up for years and most recently taking on the head coach role at Yorkshire. But Gibson’s selection here is to do with the impact he had on Durham for whom he played between 2006 and 2007. In 2007, he was “by common consent…the greatest single force in county cricket”. Across the season he took 80 wickets including all ten in an innings against Hampshire as well as hitting 578 runs. In total for Durham, Gibson took 129 wickets at 24.17 and also was a major contributor in their successful Friends Provident Trophy campaign. “To nobody did Durham owe more for their most successful season than to the 38-year-old Barbadian.”

Morkel signed for Surrey in 2018 after retiring from Test cricket and immediately had one of the great seasons by a fast bowler as he drove the side to their first Championship title in over 15 years as he took 59 wickets at an average of 14.32 and an economy of just 2.67. His overall record for Surrey stands at 107 wickets at an average of 21.44 and although he only spent two full seasons at the club, in terms of impact, it is hard to look past the South African seamer.

Mushtaq Ahmed played for three clubs in the County Championship including Surrey and Somerset, but it was at Sussex where his legend was truly made. The Pakistani spinner took 478 first-class wickets for the side at an average of 25.34. In the first decade of the century, Ahmed took more wickets than anyone else and claimed 41 five-wicket hauls. Andy Caddick was in second place with 26. Between 2003 and 2007, Ahmed was the top wicket-taker in the competition every year and on two occasions took over 100 wickets.

Quiz! Name All Of Ben Stokes' Teammates In Test Cricket