Rajasthan Royals’ sensational opener Jos Buttler has stunned the cricketing world with his terrific and consistent performances in the ongoing 2022 edition of the Indian Premier League. With over 800 runs, including 4 centuries and 4 fifties to his name, it won’t be wrong to say that Jos Buttler is the biggest reason for Rajasthan’s progression to the IPL 2022 final showdown.

Jos Buttler was at his blistering best in the Qualifier 2 round of IPL 2022 against Royal Challengers Bangalore at Narendra Modi Stadium in Ahmedabad, on Friday. Buttler went on to play a match-winning knock of 106 runs to help Rajasthan chase down a big total of 158 runs with seven wickets in hand and 11 balls to spare. 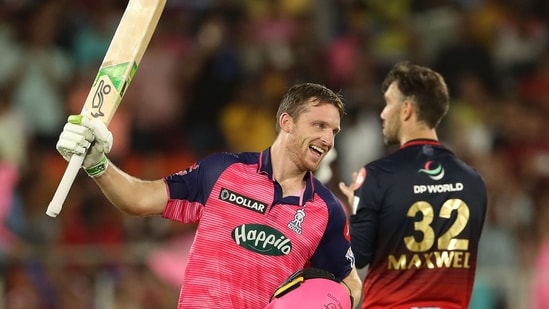 All thanks to Jos Buttler’s heroics with the bat, Rajasthan Royals entered the IPL 2022 finals after a long wait of 14 years.

Fans, former cricketers, and pundits, everyone is all praises for Buttler’s brilliant performance and have run out of adjectives to describe Buttler’s heroics in the ongoing season of IPL.

Meanwhile, addressing the media after the great win of Rajasthan Royals, Royals’ Director of Cricket, Kumar Sangakkara, hailed Buttler for his amazing performances. Sangakkara cited that there hasn’t been a player who has batted as well as Buttler in the history of IPL. Sangakkara heaped huge praise for the opening batter, he said:

“It is hard to describe what he has done for us this season in terms of T20 batting. He started off so well, he had a little bit of flutter at one point in the tournament, but then you know he calmed himself down and had a lot of good conversations rather than just training. He accepted that he is a mortal, he is a human and he can’t be at that high level of excellence every single day,”

He added: “And to understand how you kind of reach that level every game at different stages, somedays you have to fight and look ugly, other days your rhythm is there and the reality is that you cannot fight the condition, you just have to settle into it and build the innings. He can accelerate at any point; he has got all the strokes. He is a lovely guy and he understands the game really well. I cannot remember anyone batting this well in the history of the IPL,” Buttler All Set To Break A Big Record

Talking about the numbers, Jos Buttler is only 24 runs away from breaking David Warner’s record of being the top-scoring overseas batting in a single IPL season. In IPL 2016, Warner had scored 848 runs for Sunrisers Hyderabad. Overall, it is batting maestro Virat Kohli, who is leading the highest-scoring list with  973 runs to his name for RCB.