A strong, bold, assertive voice was back. Legendary commentator Ravi Shastri was back in the English commentary feed for the final of the IPL 2022, played between Gujarat Titans and Rajasthan Royals at the Narendra Modi Stadium, Ahmedabad.

Before the game, Shastri hosted the closing ceremony of the IPL 2022 which saw a number of Bollywood singers perform and a long dancing show from the ever-energetic Ranveer Singh.

Over 1.2 lakh people filled the seats of the iconic Narendra Modi Stadium. And it felt that Ravi Shastri was the best man to host them; he didn’t flinch a bit and conducted the closing ceremony successfully. 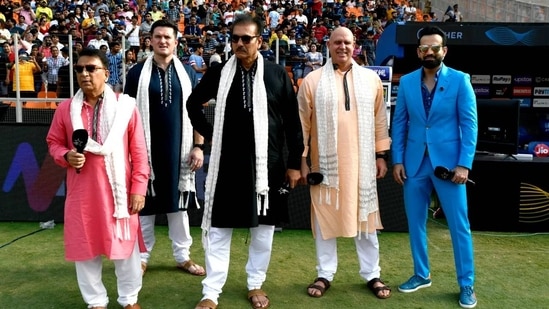 Shastri also had the pleasure of introducing BCCI President Sourav Ganguly, BCCI Secretary Jay Shah and Brijesh Patel, Chairman IPL, on the stage as they were presented the certificate from the Guinness book of world records by their representative for unveiling the largest cricket jersey in the world that had dimensions of 66 metres by 42 metres.

After the closing ceremony, Shastri then anchored the toss with Hardik Pandya, Sanju Samson and the match referee Javagal Srinath.

Fans were elated to see Shastri heading the final. Shastri, who has been in the Hindi commentary feed throughout the season, joined the English commentary panel for this majestic grand finale.

Here are some of the best reactions of fans to the return to Ravi Shastri in English commentary:

Nothing better than Ravi Shastri in toss time. pic.twitter.com/6W7n6lXVLw

Ravi Shastri is best presenter …what a introduction ..what a command … goosebumps stuff..#IPLFinal #RRvsGT #HallaBol

The GOAT is back in the English Comm box!

Such a huge crowd at the Motera Stadium. 1,24,998 sober people in the stadium along with Ranveer Singh and Ravi Shastri.

There could have been no better person to open the heavily packed IPL Final ceremony than the Legend with the Mic, Ravi Shastri himself. pic.twitter.com/Lbgdmi4Bep

Ravi Shastri at the toss.
IPL is officially back. #IPLFinal

Meanwhile, in the middle, Rajasthan Royals skipper Sanju Samson won the toss and elected to bat first. Samson explained that the pitch was a used one – on which they defeated RCB in the Qualifier 2 – and hence they feel it will deteriorate as the game progresses. Samson kept his side unchanged from the eleven that thrashed RCB a couple of days ago.

Gujarat Titans captain Hardik Pandya, though, made one change from the eleven that defeated RR in the Qualifier 1 – Lockie Ferguson replaces Alzarri Joseph who has picked just two wickets in his last five outings.

Pandya, the Baroda all-rounder, got a huge cheer from his home state crowd who are more tilted toward supporting their home team, Gujarat Titans.