Hardik Pandya’s Hilarious Celebration With The Umpire Has Gone Viral

Hardik Pandya was the showstopper with the ball for the Gujarat Titans in the IPL 2022 final versus Rajasthan Royals at the Narendra Modi Stadium.

In a phenomenal display of length and hard length bowling on the Ahmedabad surface that had bounce and movement to offer, the Gujarat skipper delivered a memorable, and potentially match-winning bowling performance, snapping up three wickets – three big ones: Sanju Samson, Jos Buttler and Shimron Hetmyer – while conceding only 17 runs in his quota of 4 overs, restricting RR to a total of 130.

When RR were at 59/1 after 8 overs, Buttler and Samson were set to take off, tilt the game hanging in balance to their side. At this crucial juncture, Pandya took the ball and with only his second delivery, he bounced out Samson, an elegant striker who this time, however, mistimed and misconnected his pull.

What followed was just tremendous: four consecutive dot balls as Pandya used the slight seam movement and bounce having Devdutt Padikkal looking totally clueless. His first over went for just a solitary run and his second over went for three runs off the bat with Padikkal once against struggling against Pandya.

Continuing the spell, on the first ball of his third over, Pandya had the big fish – Jos Buttler, with a classic back of length delivery which seamed a hint away from the RR opener, taking his outside edge through to Saha. Another 3-run over. 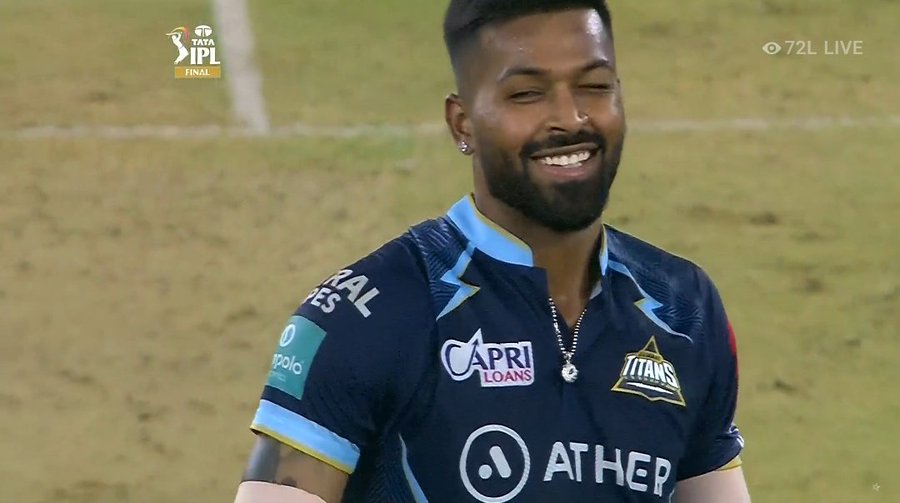 Finding himself in the middle of a dream and a game-breaking spell, Pandya decided to continue in his spell and bowl himself his fourth over. To his delight, he had another wicket – that of Hetmyer in a soft dismissal.

The West Indian had hit him for a couple of boundaries on the off side. As a reaction to it, Hardik Pandya bowled the last ball of the over on the leg stump. Looking to tap it away, though, Hetmyer was early into his shot and managed a leading-edge that popped straight back to the bowler.

Hardik Pandya celebrating with the umpire:

Since it was the last ball of the over, as soon as he caught the ball, Pandya threw it to the square-leg umpire, Chris Gaffaney, who was taken by surprise by Pandya’s quick throw. The GT skipper in his celebration sprinted towards Gaffaney and tried to gesture something to the umpire who had his one leg up in the air! Well, it was hilarious.