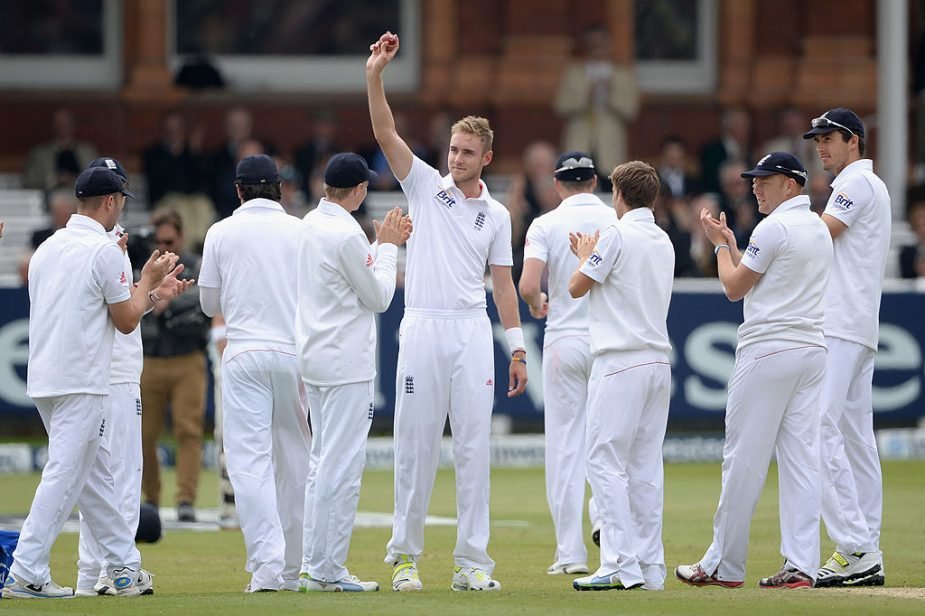 For the 2014 Wisden Cricketers’ Almanack, Hugh Chevallier reported on England’s 170-run win over New Zealand at Lord’s the previous summer.

An England victory by plenty. Plain and simple, then: this was a one-sided Test. Except it wasn’t. All the margin proved was the adage about lies, damned lies and statistics. For three of the four innings – for 250 of the match’s 272 overs – neither side jockeyed ahead of the other. Indeed on the fourth morning, after Southee laid waste the modest reaches of the England batting, it was plausible to imagine New Zealand’s momentum carrying them to their target of 239. After all, 61 Tests had been won by making as many or more in the last innings. And in Taylor and McCullum, they arguably possessed the match’s most destructive batsmen. England’s attack, on the other hand – Anderson excepted – had been short on bite.

Plausible, perhaps, but utterly wrong. Batsman after batsman traipsed out, and writhed in agony for a while before Broad, now butcher-in-chief, despatched them with an ease so contemptuous it seemed cruel to watch – a case of New Zealand lambs to the swiftest of slaughter. Batting was never straightforward on an uncharacteristically slow Lord’s pitch, but nothing that had gone before, not even England’s surrender to Southee, hinted at the speed of the disintegration.

New Zealand began their second innings an hour before lunch. Within nine balls, Fulton had flirted with a Broad delivery better ignored, gifting Prior his 200th Test dismissal. Next came a corker to remove the left-handed Rutherford: charging in with renewed oomph, Broad got one to pitch on leg, jag up the slope and uproot off. Nirvana for the bowler – and 16 for two. Anderson was making the ball sing, dance and recite poetry from the other end; perhaps the concentration required to withstand him left the batsmen exposed, since they had no answer to the rampant Broad, whose third victim came in just his third over as Taylor nibbled at an outswinger.

Williamson drove loosely to mid-off, making it 21 for four – yet the rout picked up pace. After Brownlie was undone by trademark Andersonian genius – a big inswinger followed by one that zipped up the hill – McCullum went walkabout in front of his stumps, giving Broad a five-for from 34 balls. In desperation, McCullum reviewed the decision. Hawk-Eye simply laughed in his face. If lunch at 29 for six brought respite, it also allowed Anderson and Broad to catch their breath and reload. The England snipers regained their range, and the bloodshed resumed. Watling, lame after injuring his knee earlier in the match, and Wagner did rally briefly, before the end came in tragi-comic fashion. Wagner edged skyscraper-high to long leg, where substitute fielder Adam Dobb overran the chance, losing the ball, his balance – and some dignity. But Bairstow spied hesitation over a second run, hurled the ball in, and Anderson did the rest. In fact, Anderson and Broad (who claimed a career-best seven for 44) had done the lot: for the first time in a Test since 1998-99 – and for England since the 1936-37 Ashes – just two bowlers were used in a completed innings. New Zealand’s humbling took only 135 balls.

In late March, England’s team of Houdinis had escaped Auckland with a draw. They made one change for Lord’s, Monty Panesar moving aside for the fit-again Swann, while New Zealand, for the first time, chose the same team for a fourth successive Test. Several factors then combined to ensure a ponderous day: the pitch was grudging, and the outfield – relaid after the Olympic archery – stodgier still; England’s batsmen were keen to knuckle down after feeble displays in New Zealand; while their opponents’ main stratagem was frustration. Indeed, had the mercury crawled higher up the thermometer – snow had settled in Devon the day before – the familiar Lord’s buzz might have become a torpid.

England’s top order made starts, but none passed 41 as runs seeped out at two an over. With maidens totting up, Compton betrayed a short fuse with an intemperate slog-slice off Martin’s left-arm spin. That put paid to any further thoughts of aggression: the fact that the briskest scorer was Trott, superbly caught by Brownlie at third slip, spoke volumes. When bad light ended the first day after 80 overs – 30 of them maidens – England, with the Yorkshire pair of Bairstow and Root at the crease, were 160 for four.

Root, unusually, was making his Lord’s debut in a Test – only the fourth to do so for England after Johnny Arnold (1931), Chris Schofield (2000) and Simon Jones (2002). He was also in Bradmanesque form after hitting three successive first-class scores of 175 or more (not that Bradman had actually managed that feat). Confidence oozed from Root’s bat, but he nicked an unthreatening leg-side delivery from Southee, while Prior, just named England’s Player of the Year, made a deflating golden duck. The tail contributed little, and a promising 192 for four had dribbled away to a forgettable 232. England’s batting frailties would not disappear.

Nor would New Zealand’s. They were seven for two in the blink of an eye as Anderson struck. Both were smart catches, and the second brought a standing ovation. Fulton edged low to Swann at second slip, making Anderson the 26th bowler, and the fourth from England, to claim 300 Test wickets. Aged 30 and largely untroubled by injury, he looked capable of 400 and more. The problem for England was that, with the swinging conditions crying out for a full length, Broad and Finn would keep feeding Taylor’s love of rasping cuts by pitching short; for Broad in particular it was an itch he couldn’t stop scratching.

When New Zealand reached 100 with just two wickets down and Taylor speeding along at a run a ball, Cook had every right to fret. But if this game had a defining characteristic it was that the advantage rocked back and forth like Newton’s cradle. So when Anderson undid Taylor for a crisp 66, the match situation – 100 for three in reply to 232 – was almost back to square one. England would have grabbed the game by the scruff of the neck soon afterwards had Prior not dropped Williamson on 23. But they did make good use of the DRS to overturn a not-out verdict against Brownlie. One step back; one step forward. All of which meant that the score at the end of the second day – New Zealand 153 for four – was much as it had been at the start, only with the other team batting.

The similarities continued next morning. New Zealand’s tailspin began from the fourth legitimate ball of the day, when McCullum flashed at Broad. As he would in the second innings rout, McCullum asked for a review, but Hot Spot revealed an ugly white mark on his bat. The Test’s most magical moment came when Anderson utterly discombobulated Martin. Two nip-backers and a sumptuous outswinger that clipped the top of off had older spectators summoning the ghost of Fred Trueman, who famously said: “It were wasted on thee, lad.” With Finn rediscovering menace, the innings unravelled much as England’s had 24 hours earlier: six for 72 on the second day; six for 54 on the third.

England gained a lead of 25 – and a shade more urgency as they began to build on it. Both openers fell with the score 36, but Root and Trott consolidated. They looked the business when using their bats, but between the wickets they revealed themselves as graduates of the Inzamam School of Advanced Running Cock-ups. Somehow, the only victim of at least three farcical misunderstandings was Watling, who damaged his knee diving for the stumps after gathering a wayward throw. McCullum, once the regular keeper, took over, though he disconcertingly used shin-guards beneath his flannels rather than pads. Eventually, Root’s concentration snapped, and he was bowled by Southee via an inside edge. The breakthrough kept New Zealand, 184 behind and seven wickets to capture, in with a shout.

By the third-day close, the shout had become a roar. Southee wrenched the initiative by dismissing Bairstow and, for his first pair in 226 first-class matches, Prior. With Trott spun out by Williamson – bowling in place of Martin, who had injured his calf – and Bell batting at No. 8 because of tonsillitis, a wobblesome England were desperate to leave the field. England’s plight should have been no surprise, as this was a Test memorable for a farrago of middle- and lower-order collapses. Indeed the fourth day, which comprised 101 runs and 14 wickets, was essentially one long collapse. Southee found just enough movement to snaffle three more wickets, becoming only the second New Zealander after Dion Nash in 1994 to take a ten-for at Lord’s. England had eyed a huge, defeat-proof lead, but in the end set a flimsy 239. Without Broad, who rode his luck before lumberjacking his way to an unbeaten 26, it would have been worse. As it happened, though, he was just sharpening his axe before the real tree-felling began.

Rob Key: I Still Think Jos Buttler Could Be An Outstanding Test Wicketkeeper-Batter