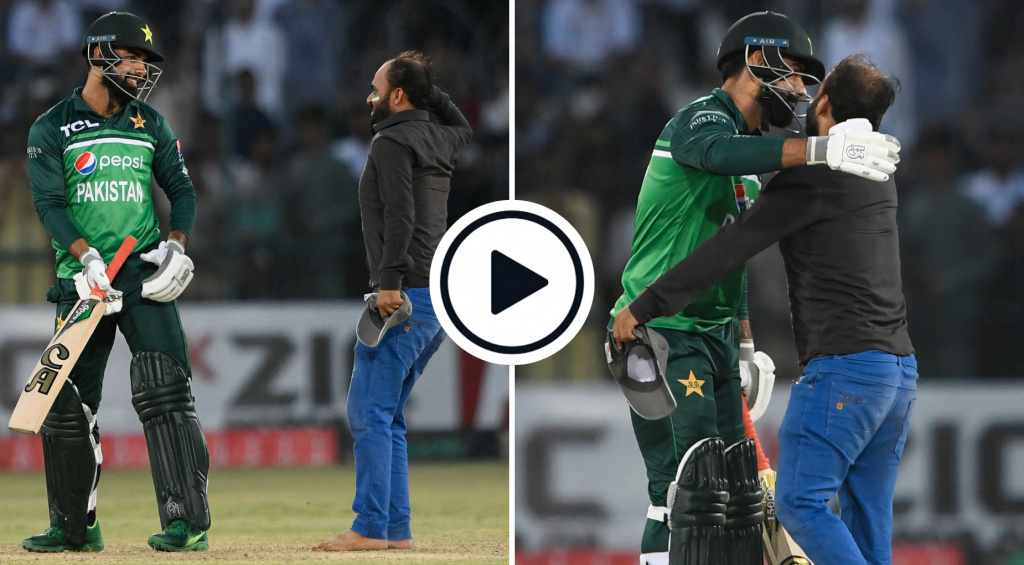 A pitch invader caused a short stoppage in play during the second Pakistan-West Indies ODI, running all the way to the batting crease and receiving a hug from Shadab Khan before running back towards the stands.

The incident occurred in the 39th over of Pakistan’s batting effort, with Anderson Phillip bowling to Shadab. The West Indies quick was forced to pull out of his run-up due to the spectator encroaching on the field of play, with the fan running up to Shadab and offering the all-rounder a salute.

Shadab then embraced the fan, who then turned and ran away from the playing area.

The moment met with mixed reactions. Commentator Ian Bishop said that he understood “all the reasons why [pitch invading] is frowned upon”, but praised Shadab for his handling of the situation.

Great moment just now when a spectator ran onto the field. Instead of being violent with him (because it could have been dangerous, plus COVID), Shadab Khan hugged him and sent him on his way. #Beautiful. P:S,,,I understand all the reasons why that is frowned upon.

Geo News journalist Arfa Feroz Zake played down the security concerns around the incident, citing the checks around the ground as minimising any risk.

What’s wrong if a fan rundown to hug Shadab Khan on the pitch? Why cant we enjoy a lighter moment during the match?This act would’ve been thoroughly enjoyed if had happened in some other country. We’re too much obsessed with security issues! Calm down and enjoy the moment #PAKvWI

Opinions claiming a fan running towards cricketer in the ground should be discouraged due to security. Do you even know after how many checkpoints a spectator gets clearance & enters inside stadium?6000+ security personnels on duty! Too much security obsession is not good #PAKvWI

The spectators did enjoy the moment; we heard the loud cheer. It’s problematic when no security official runs after pitch invader when he was approaching Shadab Khan. God forbid, but one mishap and all the efforts to bring international cricket will go down the drain.#PAKvWI https://t.co/BQ7DBmCwtP

According to Geo Super, a Pakistani sports channel, the spectator was taken into custody.

Shadab ended up making 22 off 23 balls, with Pakistan finishing on 275-8. Victory would guarantee the hosts the series spoils.

There Is A Global Shortage Of Young Top-Class Test Batters