Former Team India pacer Venkatesh Prasad was involved in a fiery war of words on Twitter on Monday as he made opinions on the ongoing political instability in the country.

Amid this, one Twitter user tried to troll Prasad by posting a picture of his battle with former Pakistani captain and opener Aamer Sohail in Prasad’s comments section. The picture was from the 1996 World Cup quarter-final between the two arch-rivals in Bangalore.

India emerged victorious in that game, ending Pakistan’s World Cup reign who were the 1992 World Cup winners, and went on to seal a place in the semi-final with Sri Lanka.

Chasing a target of 288, Aamer Sohail and Saeed Anwar had given Pakistan a solid start with an 84-run stand before they suffered a collapse and eventually lost the match by 39 runs. Sohail, the Pakistani skipper, was the second wicket to fall and it came with plenty of drama.

This image reminds of an iconic moment in Indian cricket.
Today evening at 630pm IST, join me & Aamir Sohail in a fun chat on Glance Live Fest where we talk about what happened at Bangalore’96 & many other fun stories and polls for you. Do join using this https://t.co/ARKaKz7FpC pic.twitter.com/o0gz3hjsKf

The left-hander had driven Venkatesh Prasad for a fiercely struck cover boundary. Looking to spark a fight, Sohail then aggressively gestured Prasad towards the cover region with his bat, then showed him his finger as if giving a warning and hurled some words toward the Indian seamer.

Prasad stayed mum – only for letting his ball to the talking: on the next delivery, as Sohail went for another big shot, he missed the ball completely and his off-stump was uprooted from the ground. Pumped up with the wicket, it was then Prasad’s time to gesture, telling Sohail to take the walk back to the dressing room, the batsman

On Monday, though, a Twitter user used only the first part of this duel to mock Prasad, who then came with a superb reply to shut the troller down. Embarrassed by it, this user deleted his tweet, but the screenshots of which had already gone viral.

“Yes dear Murad, I do. He was arrogant in this image you posted, you need to see the next ball to know what arrogance can do- Uproot which in Hindi means Ukhaad,” Prasad replied. 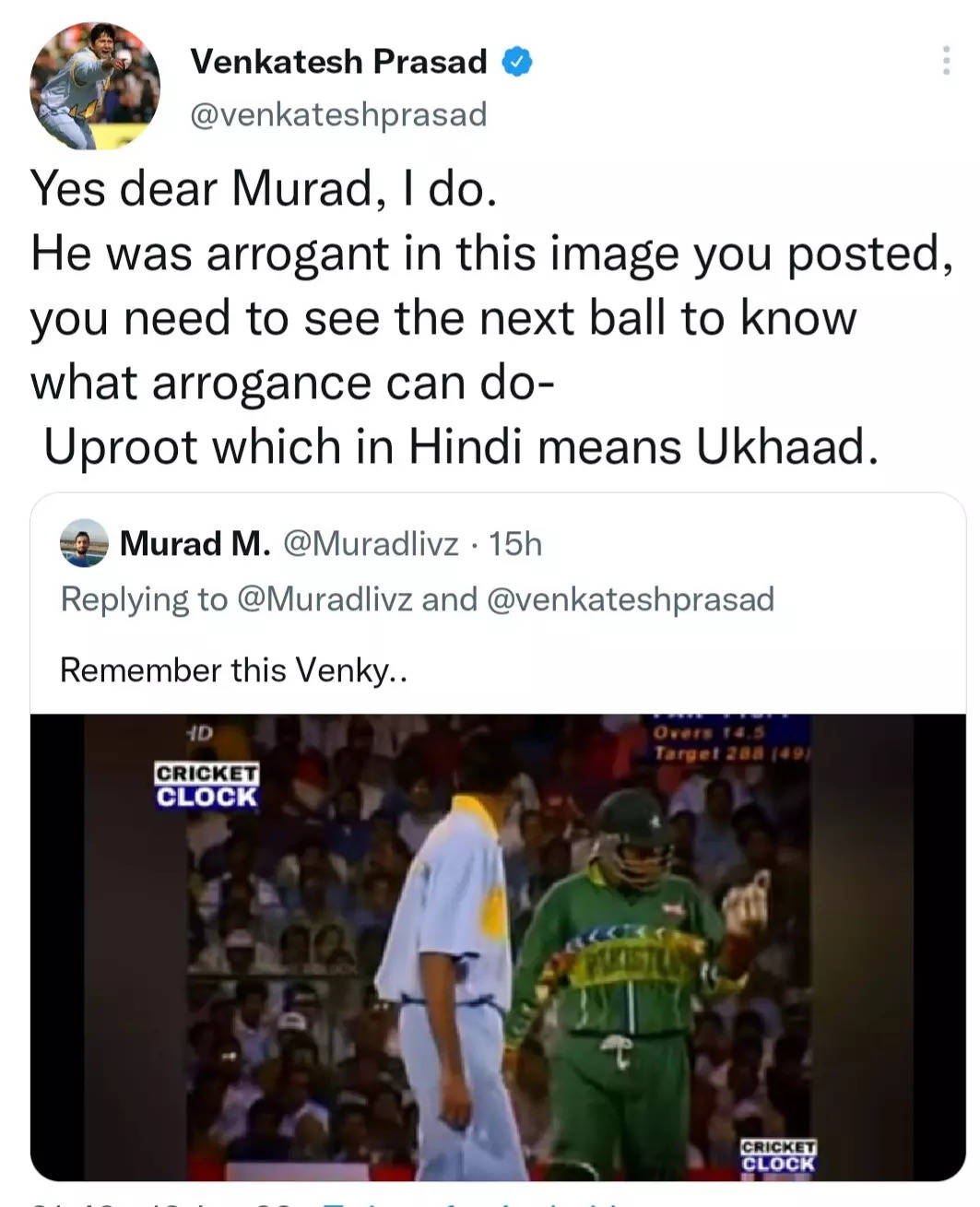