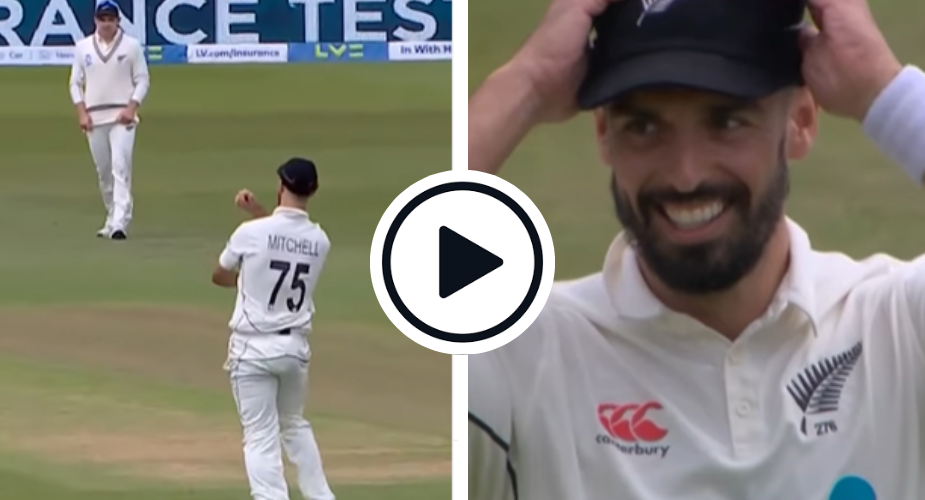 Watch: Daryl Mitchell tried to tease the crowd as he pretended to take a catch off a bump-ball during the second New Zealand-England Test but ended up conceding one run off an overthrow instead.

Mitchell, who registered a career-best 190 in the first innings, did not have the best outing on the field, dropping two catches off Alex Lees and Ollie Pope. His struggles continued when he conceded an extra run via an overthrow celebrating a crowd catch after the ball had bounced.

Pope reverse-swept a ball that hit the ground before landing in Mitchell’s hands behind square on the off-side. The Kiwi player threw the ball in the air to ‘celebrate’, but lost control of the ball, which landed a distance behind him and allowed Pope to trot through for a single. Mitchell had a sheepish smile on his face following the overthrow, as Mark Butcher, the on-air commentator, said, “He can see the funny side, which is just as well really because I’m not sure he’s going to get much sympathy from the crowd.”

Pope scored his second Test hundred, making 145 off 239 balls as England ended their innings at 539 all out, in reply to New Zealand’s first innings score of 553.

Watch Daryl Mitchell concede an overthrow after trying to tease the crowd here:

A post shared by We Are England Cricket (@englandcricket)

Mithali Raj opens up on dispute with coach Ramesh Powar