England Have Just Broken Basically Every ODI Batting Record There Is 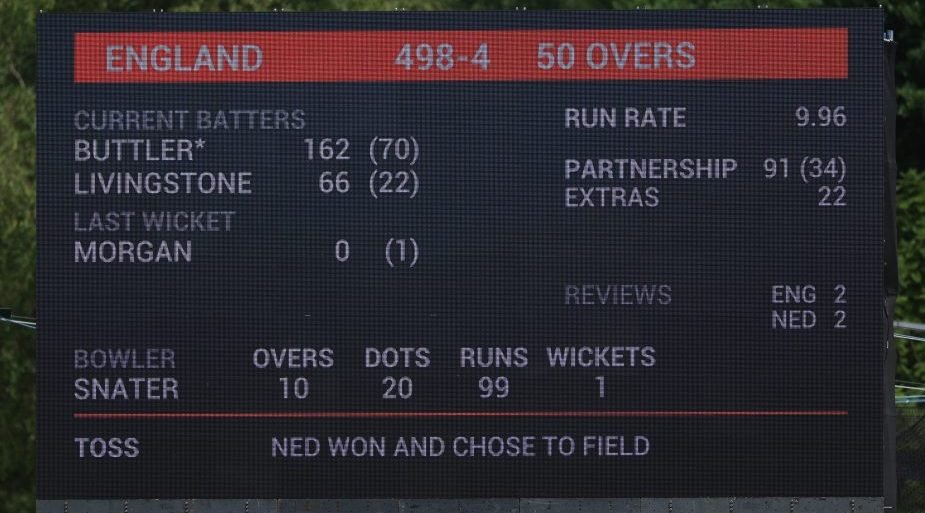 England broke all manner of records during the first ODI against the Netherlands, racking up a world-record 498-4 at Amstelveen.

The Netherlands landed an early blow, with opening bowler Shane Snater bowling Jason Roy, his cousin, for one, but England’s Nos.2-4 all made centuries to put up a mammoth total. It marked only the third time in history that three batters have made tons in the same men’s ODI innings, with South Africa having done so twice in 2015.

Phil Salt and Dawid Malan each made their maiden ODI centuries, with the former registering his first international hundred and the latter joining an exclusive club of players with a ton in every international format. For England, only Heather Knight and Jos Buttler had done so before Malan.

It was Buttler who top scored with an innings to rank among his most destructive. His 47-ball hundred was both his and England’s second fastest in the format, with Buttler also occupying third on the list. While Eoin Morgan fell for a golden duck, Liam Livingstone continued the destruction, smashing 66 off 22 balls, and briefly threatening AB de Villiers’ record for the fastest ODI fifty. Livingstone brought up his half-century off 17 balls, one slower than de Villiers’ 16-ball fifty against West Indies in 2015. His was the fastest fifty for England in ODI cricket, and equalled his 17-ball fifty against Pakistan in a 2021 T20I for England’s quickest half-century across formats.

Buttler was also second to de Villiers on a notable list, bringing up his 150 from 65 balls, one ball lower than de Villiers’ 150 also against West Indies in 2015, though in a different game to the 16-ball fifty. Buttler’s hundred contained 14 sixes. Only one Englishman has hit more in a single innings – Eoin Morgan’s 16 against Afghanistan in the 2019 Cricket World Cup. He has now scored 10 ODI centuries, fifth on England’s all-time list, and ahead of, among others, Kevin Pietersen.

England’s 498-4 isn’t just an ODI world record, but also set a new record for the highest ever score in men’s List A cricket. The total surpassed the previous record of 496-4 scored by Surrey against Gloucestershire in 2007.

In men’s cricket, England previously held the world record for the highest ever ODI total of 481-6, made against Australia at Trent Bridge in 2018. England also broke the record for the most sixes in an ODI innings with 26. Again, beating their own previous record of 25 which came against Afghanistan during the 2019 World Cup.

It was the 21st occasion that a side has passed 400 in ODI cricket and the fifth time that England have done so, second only to South Africa. All of those scores have come since 2015.