It was utter carnage in Amstelveen as England, the 2019 World Cup champions, continued their rampant beast mode to ransack 498/4 in the first ODI of the three-match series versus the Netherlands on Friday.

England Smashed Their Own World Record

They broke their own previous record of 481 for 6, made against Australia in 2018. This is also now the highest total ever in the history of all List A cricket surpassing 496/4 by Surrey against Gloucestershire at the Oval in 2007. England now occupy the top three positions for highest innings totals in ODIs, the third one being 444/3 vs Pakistan in Nottingham in 2016.

Three England batters – Jos Buttler (162 not out of 70 balls), Dawid Malan (125 off 109) and Phil Salt (122 off 93) – scored centuries while Liam Livingstone smashed a 17-ball fifty, the fastest-ever by an Englishman in ODIs, finishing with 66 off 22 balls, but England fell just two runs short of the 500-run mark. This was after Netherlands skipper Pieter Seelaar won the toss and elected to bowl first! 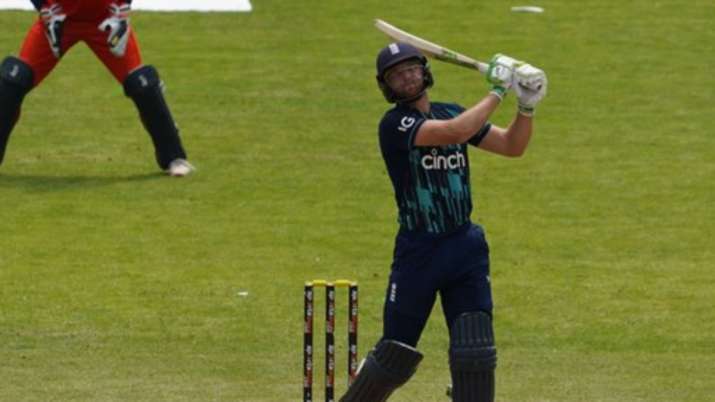 The visitors smashed 26 sixes in their 50 overs – the most by a team in an ODI innings. England sits in the next two places as well- 25 against Afghanistan in Manchester and 24 against West Indies in St George’s, both in 2019.

England lost opener Jason Roy (1 off 7) early in the innings to his cousin Shane Snater before Malan and Salt forged a 222-run partnership off 170 balls. Both batters brought up their maiden ODI centuries and Malan became only the third England player ever – after Heather Knight and Buttler – to register a hundred in all three formats.

Malan and Buttler shared a stand of 184 from 90 balls of which the latter hammered 139 runs off 60 balls. Wickets of Malan and Eoin Morgan (golden duck) brought in Livingstone who clattered right from his second ball, walloping 32 runs off one over to spinner Philippe Boissevain.

Buttler and Livingstone shared an unbeaten stand of 91 runs off just 32 balls as England piled up a world record.