Jos Buttler wreaked havoc in Amstelveen as England consigned the Netherlands to concede the most runs ever in, not just ODI cricket, but in the history of List-A cricket: 498/4.

Three England batters – Jos Buttler (162 not out of 70 balls), Dawid Malan (125 off 109) and Phil Salt (122 off 93) – scored centuries and Buttler was the most destructive of them. Liam Livingstone smashed a 17-ball fifty, the fastest-ever by an Englishman in ODIs, finishing with 66 off 22 balls, but England fell just two runs short of the 500-run mark. This was after Netherlands skipper Pieter Seelaar won the toss and elected to bowl first! 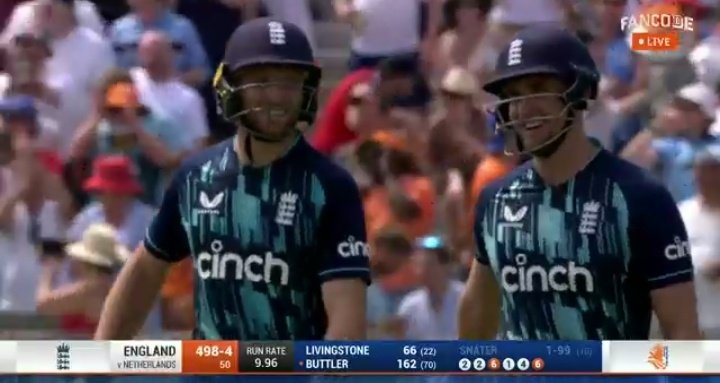 Buttler, who was given a reprieve when dropped in the deep, brought up his century in 47 balls, just one more than he did in 2015 vs Pakistan in Dubai and is now the holder of the three fastest centuries by an England men’s batsman – off 46 balls, 47 balls and 50 balls. 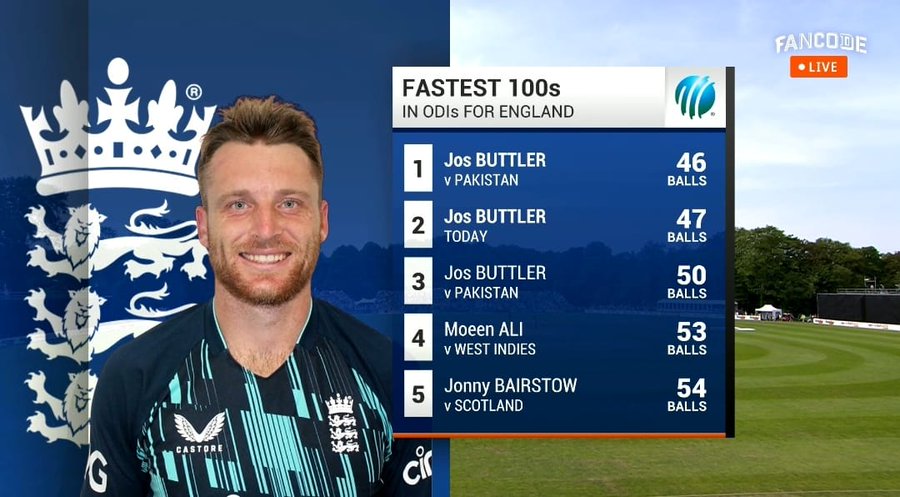 Also, England scored 274 runs between overs 31 and 50 – now the most by a team in the last 20 overs of an ODI innings bettering South Africa’s 267 against West Indies in Johannesburg in 2015. Buttler hit 162 of these runs making it the second most by a batter in this phase after Rohit Sharma’s 171 runs against Sri Lanka in 2014.

Here are some of the best Twitter reactions to Jos Buttler’s thunderous knock:

Great viewing from Jos Buttler and Liam Livingstone there. pic.twitter.com/i3SKBiE6vV

Buttler was on 17 from 16 when Dawid Malan was on 99. At this point, this is where things are. pic.twitter.com/qBRQ6iTKxE

I’m old enough to remember when Sri Lanka got 398 against Kenya and it seemed an unreal score.

England have just got 498 now. Stunning. Unbelievable. Jos Buttler is a phenom. Liam Livingstone is

This is Jos Buttler’s world. pic.twitter.com/8WfI3RpzkZ

Ludicrous hundred from Jos Buttler – off 47 balls, missing his own record for the fastest by an Englishman by one. Now holds each of the top three spots and if he keeps batting at No. 4 then there will be plenty more to come

What a fantastic performance by Salt, Malan and Buttler.

Most 6s by an England player in ODIs:

England lost opener Jason Roy (1 off 7) early in the innings to his cousin Shane Snater before Malan and Salt forged a 222-run partnership off 170 balls. Both batters brought up their maiden ODI centuries and Malan became only the third England player ever – after Heather Knight and Buttler – to register a hundred in all three formats.

Malan and Buttler shared a stand of 184 from 90 balls of which the latter hammered 139 runs off 60 balls. Wickets of Malan and Eoin Morgan (golden duck) brought in Livingstone who clattered right from his second ball, walloping 32 runs off one over to spinner Philippe Boissevain.

Buttler and Livingstone shared an unbeaten stand of 91 runs off just 32 balls as England piled up a world record.

Also Read: IND vs SA: Rishabh Pant Is Getting Trolled Left, Right And Center On Twitter

Watch: The Netherlands' Players Search For Cricket Ball In The Trees After Dawid Malan Six