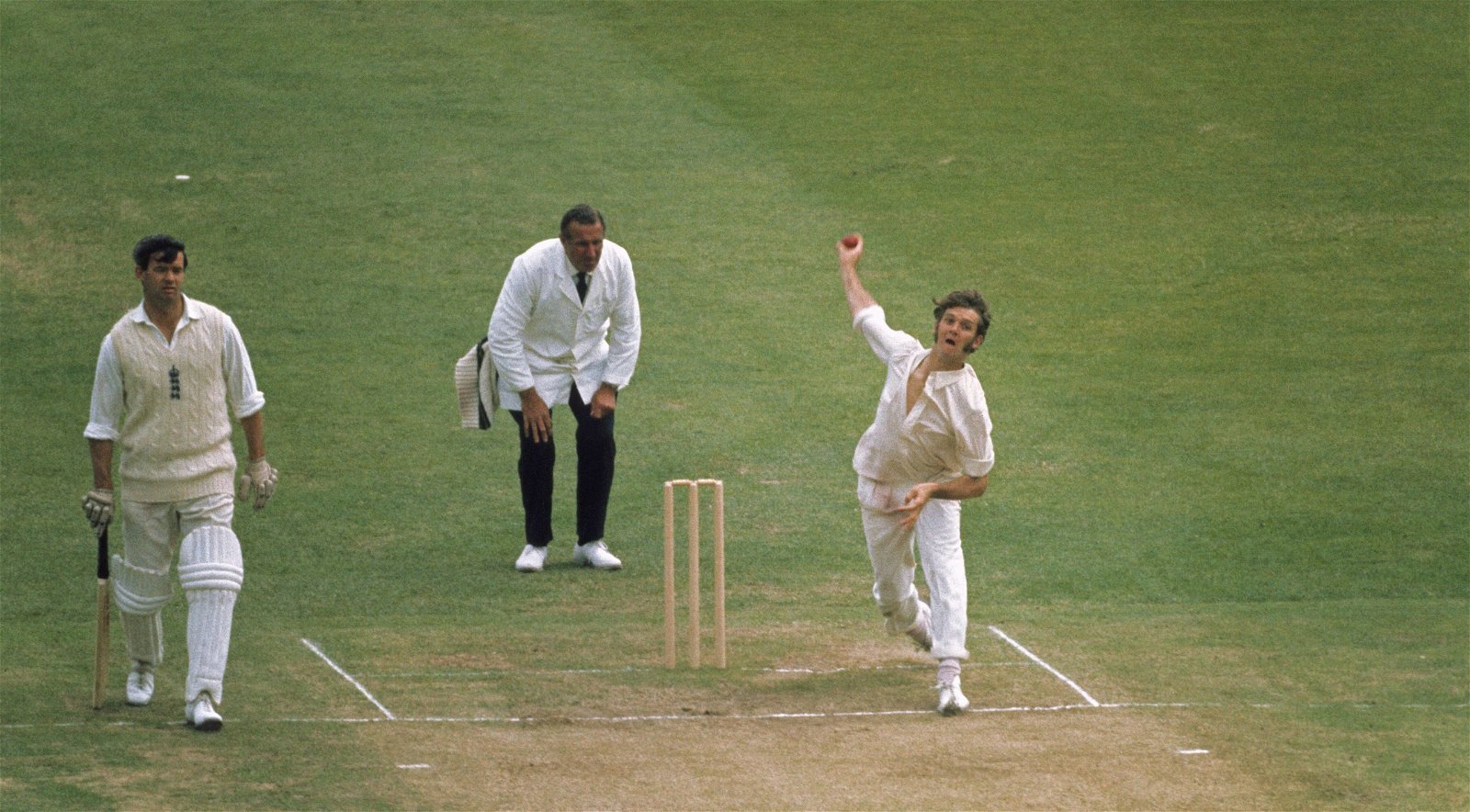 As originally appeared in the 1973 Wisden Almanack, Norman Preston reports on the 1972 Old Trafford Ashes Test, won by Australia after a record-breaking performance from debutant Bob Massie.

Australia soon avenged their defeat at Manchester in a contest which will be remembered as Massie’s match. The 25-year-old fast bowler from Western Australia surpassed all Australian Test bowling records by taking sixteen wickets for 137 runs; in all Tests only J. C. Laker, nineteen for 90 for England against Australia in 1956 and S. F. Barnes, seventeen for 179 for England against South Africa in 1913-14, stand above him. Moreover, Massie performed this wonderful feat on his Test debut, the previous best by a bowler on his first appearance for his country being as far back as 1890 when at The Oval, Frederick Martin, a left-arm slow medium pacer from Kent, took twelve for 102 for England against Australia on a pitch that had been saturated by rain.

Not for the first time, particularly in recent years, England were badly let down by their specialist batsmen, who failed lamentably in all respects. From the start they allowed the Australian bowlers to take the initiative and their excessive caution met with fatal results. Illingworth won the toss for the seventh consecutive time and one must admit that the hard fast pitch–it remained true to the end–was ideal for men of pace. During the first three days, too, the atmosphere was heavy and ideally suited to swing. Massie maintained excellent length and direction and his late swing either way always troubled the England batsmen. The conditions would also have suited Arnold, but England’s best bowler at Manchester was suffering from hamstring trouble and on the morning of the match was replaced by Price, who proved rather disappointing. That was England’s only change, whereas Australia brought in Edwards and Massie, who had recovered from a strain. Both were making their Test debuts and for the first time Western Australia had four representatives in the Test XI.

One must also stress the important part Lillee played in Australia’s victory. Perhaps he was inspired by his six for 66 in England’s second innings at Manchester. Anyhow, although this time his reward was confined to two wickets in each innings he looked a far better bowler. He had tidied his long fast approach of 22 strides, he was truly fast and he sent down far fewer loose deliveries. Massie capitalised on the hostility of his partner.

A light drizzle delayed the toss and the start for twenty-five minutes. Australia lost little time in taking the initiative, Boycott, Luckhurst and Edrich being removed for 28 runs before any substantial resistance was offered. At times Massie bowled round the wicket, but Smith and d’Oliveira raised the score to 54 for three at lunch. Afterwards, d’Oliveira struck three fine boundaries only to be leg-before to Massie’s slower ball, whereupon Greig proceeded to hit his third successive fifty for his country.

Greig and Knott enabled England to make a satisfactory recovery in their stand of 96, but immediately after tea at 146 Knott spooned Gleeson gently to mid wicket where to everyone’s amazement Francis dropped the catch. In the end both batsmen fell to casual strokes, but Illingworth and Snow played well so that at the close of a momentous and exciting first day England were 249 for seven.

Next morning the new ball was due after two overs and Massie snatched the remaining three wickets and led his team back to the pavilion. Of the 36 bowlers Wisden lists who have taken eight wickets in a Test innings, only A. E. Trott, for Australia against England at Adelaide in 1895 and A. L. Valentine, for West Indies against England at Manchester, 1950 had previously accomplished the performance on their Test debuts.

A superb century by G. S. Chappell made the second day memorable after Australia had received early shocks in the loss of Francis and Stackpole for seven runs. Ian Chappell set a noble example as captain, leading the recovery with an aggressive display. He used his favourite hook to some purpose while his brother remained strictly defensive. Ian struck one 6 near Smith before he fell to a fine running-in catch that Smith held rolling over near his ankles.

Snow, if not so fast as Lillee, bowled splendidly and soon induced a catch from Walters, but Greg Chappell, in for three hours before he hit his first boundary, now took charge, excelling with the off drive. Edwards gave valuable support, but with the light murky Illingworth brought on Gifford and then himself, tempting Edwards into indiscretion for Smith to bring off another fine running catch on the leg side. Chappell duly completed his hundred on the stroke of time and Australia wound up 71 behind with half their wickets intact.

On Saturday the gates were closed at 11.10 a.m. with 31,000 inside. Greg Chappell lasted another hour and a half, batting altogether for six and a quarter hours, and in his splendid upright style hit fourteen 4’s. Australia, who did not wish to face a huge target in the fourth innings, went ahead through another gallant display of powerful hitting by Marsh. He struck two 6’s and six 4’s in his 50, which came in seventy-five minutes and Australia gained a useful lead of 36. Snow, five for 57, alone of the England bowlers excelled.

Only the most optimistic Australian could have anticipated the success which so soon attended the efforts of Lillee and Massie. The England collapse – half the side were out for 31 – began when a fast shortish ball from Lillee lifted and Boycott, instead of dodging, preferred to let it strike his body while his bat was lifted high. It bounced off his padded front left ribs over his shoulder and dropped behind him on to the off bail. It was most unlucky for Boycott as well as England. Obviously, the Australians, having captured so valuable wicket so cheaply, now bowled and fielded like men inspired. Luckhurst had no positive answer to Lillee’s pace and soon went, to be followed by Edrich who was compelled to flick at a late outswinger (to him) that would have taken his off stump.

Again, Smith, getting right behind the ball, kept up his end, but the remainder were bemused by Massie’s accuracy and late swing which meant that at the end of a miserable Saturday for England they stood only 50 runs ahead with nine wickets down.

It remained only for the weather to stay fine on Monday for Australia to gain their just reward. Gifford and Price put on 35 in the best stand of the innings but Australia needed only 81 to win and Stackpole saw them comfortably home.
With 7,000 present on the last day, the match was watched by just over 100,000 (excluding television viewers) and the receipts of £82,914 were considered to be a world record for a cricket match with the possible exception of India.

This piece originally appeared in the 1973 Wisden Almanack.