Kane Williamson’s record in England is not very good. Over the course of eight Tests, he’s managed just over 400 runs, at an average under 30. For a man of his undoubted talents, it’s a blot.

So why has he struggled in England?

To an extent, he’s simply faced very good bowling. The Expected Average of the balls he has faced in this country is 29.60, almost exactly Williamson’s own record in England. He has performed about as close to what you’d expect a typical player to do so as humanly possible – the reason it sticks out is that Williamson is far from your typical player. 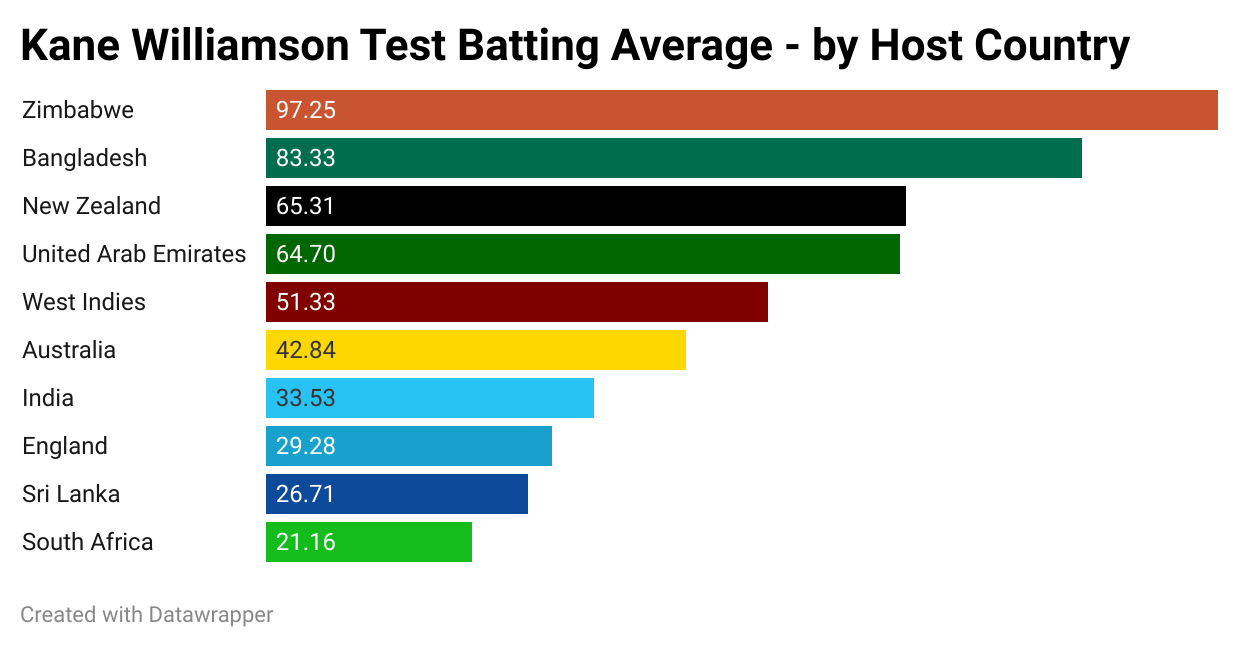 If you dig into the specific elements of why Williamson’s record is so poor, a pattern emerges. While his numbers against spin are not strong (having averaged just over 25), it’s clear that with 11 of his 14 dismissals in English Tests coming against the quicks, this is where Williamson’s issues lie. Against the Dukes ball, which notoriously offers greater assistance in terms of lateral movement, New Zealand’s skipper has found his natural game disrupted.

Another pattern comes to the fore when you look at the nature of these wickets as well. Against the ball seaming back into him in England, Williamson averages 74; against the ball seaming away, that drops to 27. That level of movement off the surface is just so much more prevalent in the UK than in Williamson’s home conditions. Less than a third of the balls you face in New Zealand Tests are genuine away-seam deliveries, but in England it’s a fraction under half.

It’s not only a question of individual deliveries catching Williamson out – there’s a rhythm element at play as well. While his defensive prowess is clearly not hitting the heights in England, there’s a clearer drop off in his ability to score here than in his ability to survive. In home conditions, Williamson is ruthless when he looks for boundaries. When playing attacking strokes in New Zealand, he averages comfortably over 100 runs per dismissal. In England, that falls to 44. As significant as his worsening defensive record is, this is probably the biggest reason for Williamson’s poor performance – he finds it very difficult to hit boundaries against seamers in England. For any batter, that would affect the way you construct an innings, the way that you feel comfortable at the crease.

The reasonable criticism is that in the most helpful conditions for seamers, typically found in England and South Africa, Williamson comes up short. For all the low heartbeat, playing under your eyes, whataniceguyness that you find in praise of the Kiwi, when he has been faced with the toughest conditions, he has fallen away.

And yet, as with everything, there is an economic function to Williamson’s career, and his struggles in England. New Zealand are structurally pushed away from playing as much Test cricket, and notably as much flagship Test cricket, compared to the Big Three countries. Until the start of last year, Williamson had been playing Test cricket for more than a decade, and had played only four Tests in the UK. A flurry of as many matches again has boosted that figure, but the point remains that in comparison to Steve Smith, Virat Kohli, and Joe Root, Williamson gets far fewer chances to climb the mountain. Root has failed in Australia three times now, but he will get a fourth go. Since the start of the 2017/18 Ashes, Root has only played two fewer innings in Australia than Williamson has played in his home country. They are running different races.

It speaks poetic volumes that one of the few Tests Williamson has been allowed to play in these conditions came as a result not of friendly scheduling, but as a result of his side’s own quality in reaching the World Test Championship final last year. Far more so than his colleagues at the elite level of Test batting, Williamson has had to fight the structures of international cricket to gain entry to that club. Whether he’s the best, the worst, or somewhere in between – in that light, it doesn’t matter.

And so as rumours circulate around his captaincy future, and the extent to which his elbow injury has hampered his performance in both this series and in the IPL season which preceded it, it’s only natural to sit with how much longer we get to enjoy Williamson at the top table. For all the cheers and jeers which have met his struggles on English shores, he is exactly the sort of demure, deferential genius that English crowds adore. In that sense – and perhaps in that sense only – he is a classic of the genre, when it comes to being lauded and loved far more in retrospective than when it mattered.

Ultimately, for all the lauding of his elegant technique and classical base, Williamson’s struggles in England are primarily down to an inability to cope with lateral movement from seamers, for that high elbow, late contact to translate into runs in the toughest conditions. It is a small, frustrating blot. For the hope of the neutral, or the fan who wants to see the underdog compete in both a team and individual context, Williamson’s improved performance on his return to the UK is paramount. Until then, we can only cross our fingers.

All The Rules Of The New Cricket Format: The 6ixty