The Emergence of Matthew Potts

Ben Jones looks at what the Durham seamer has brought to the England set-up in his debut series.

Another day of Ben Stokes and Brendon McCullum, another day of chaos. As England head to bed at the end of Day 3, they do so slightly ahead in the contest, with WinViz giving them a 51% chance of overcoming their visiting opposition – as well as the clock – in the third Test, to claim a first substantial clean sweep of home Tests in almost a decade. A remarkable fightback with the bat met substantial inroads with ball, leaving the Kiwis 137 runs ahead, five wickets down, and fighting to post a total beyond the reach of this increasingly unpredictable England batting unit.

Yet for all the madness of the morning, of Stuart Broad’s 42 (36) and the disappointment of Jamie Overton’s remarkable 97, it was perhaps the most orthodox cricketer on show who made the key contribution. Matthew Potts, in removing opener Will Young and captain Kane Williamson, kept England in the contest as New Zealand looked to swell their lead.

Young was a simple wicket in truth, a good length ball drawing a flash from Potts’ Durham teammate, as well as an edge that flew rapidly to Ollie Pope in the cordon. The right-hander ends the series with an average of just 22, a slim showing against his 50+ Championship average this season. For all his undoubted commitment to succeeding in this series, he’s looked a tier below international class.

Williamson fell to another loose stroke, another attacking shot from a good length delivery – or just short of a good length – that indicated his inability to adapt that classically grooved technique to conditions where the ball moves sideways. The skipper had played later, deeper in the crease than he had in any previous innings this series, and was making a visible effort to leave the dangerous deliveries alone. We don’t associate the need for such temperance with Williamson, renowned for his calm demeanour and clarity of thought, saving such criticisms for the hot-headed Virat Kohli or the absent-minded Joe Root. Increasingly one thinks that inferring technical and mental fortitude from personality is a failing of the industry.

From Potts’ perspective, as bunnies go, Williamson isn’t a bad one. The Durham seamer is only the third seamer ever to dismiss the Kiwi skipper three times in the same series, joining Zaheer Khan and Hasan Ali. A statistical flourish and nothing more at this stage, but if you’re a medium-fast seamer capable of bothering one of the modern game’s greats quite so frequently, quite so early in your career, then things are looking alright. 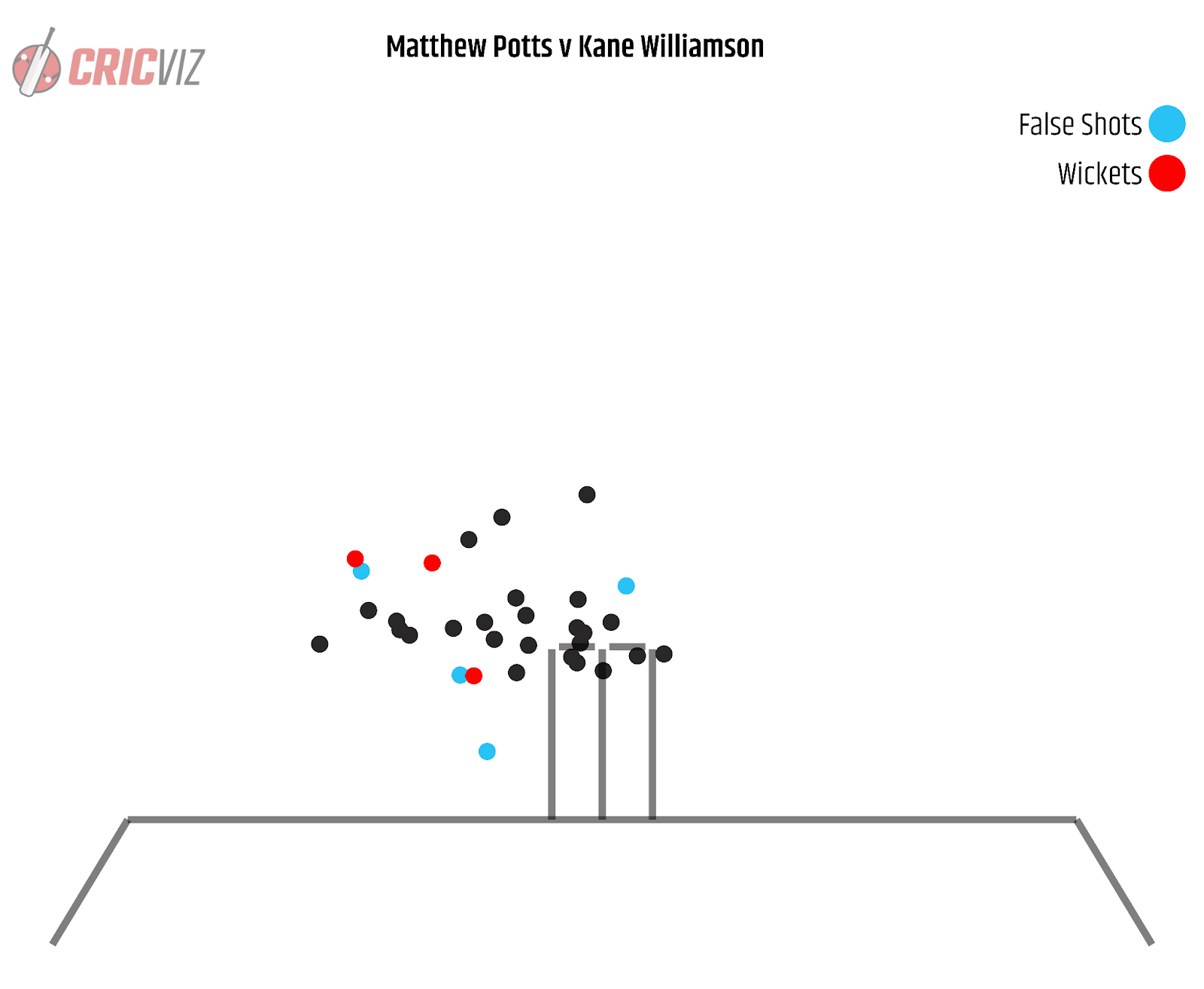 It’s not the only area where things are looking at rosy for the Sunderland-born quick. He’s had an excellent start to his Test career, offering a surprising degree of solid reliability for such a young bowler, and for England in the midst of an underplayed injury crisis. The foundations of Potts’ game are the classic ones for an England seamer, physically strong in an unassuming manner, hammering away at the corridor of uncertainty. He has hit a good line and length with 42% of his deliveries, the most of any seamer in the series on either team. That is extremely high, comfortably in the company of Josh Hazlewood, Mohammad Abbas, and others with that uncanny knack of hitting the top of off time and time and time again. As knacks go, it’s a good one.

On top of that accuracy, he does do enough with the ball. He’s almost exactly matching Stuart Broad’s metrics in terms of lateral movement, with the third least swing and the third most seam movement – for all Broad’s showmanship, he’s far more concerned with the more functional movement off the seam than the glamorous hoop through the air, and Potts agrees.

The crux of it all is that Potts’ offering is extremely effective in these conditions. The Expected Average of the deliveries he has bowled in this series, his first in international cricket, is exceptional, bettered only by Ben Stokes, Trent Boult, and Neil Wagner. This is not a bowler of excess speed, excess movement, excess aggression – but it translates very favourably into an excess of threat.

If Robinson is the slightly more natural successor to James Anderson, moving the ball both ways off the pitch and through the air, Potts looks increasingly like the man ready to step into Broad’s shoes. While he is yet to gain Broad’s famed relationship with the crowd, or to burnish his performances with the knee-pumping mythology that comes with hundreds and hundreds of Test wickets, Potts does seem to have the confidence to take the game by the scruff of the neck. In the afterglow of dismissing Williamson, he was actively moving fielders around, asserting himself on the team. It makes no difference to the performance or the results, but it indicates a young man who is feeling increasingly assured of his place at this level.

Potts isn’t a particularly sexy cricketer. If McCullum is sincere in his desire to show people “Test cricket is sexy” – which let’s be honest, it isn’t really – then Potts isn’t the sort of player you’d immediately picture. 131kph, nagging line and length, bit of this, bit of that. He is not billboard-ready, he is not a gif, meme-fresh, easily decipherable, two-dimensional and snackable for the TikTok generation. He is a subtle, solid bowler who has done very little wrong across the three Tests in which he’s pulled on an England shirt.

Every great side needs this guy. Waugh’s Australia had Jason Gillespie banging away on a length, Vaughan’s England had Hoggard “on the shop floor” dotting up, Flower’s England had Bresnan sprinting into the wind. England are far, far away from those sides, but it is not unambitious to plan with these guys in mind. Every team needs someone to build pressure, every massive session needs someone with enough wherewithal to work City Mapper, every Messi needs a Puyol.

It might not fit as directly into McCullum and Stokes’ vision as the pace of Jamie Overton, the flair of Jonny Bairstow, or the pantomime aggression of Zak Crawley, but if England are serious about building a side that wins as many matches as it wins minds, then Matthew Potts could be a huge find.