Former Madhya Pradesh captain Chandrakant Pandit was sobbing pitchside at the M. Chinnaswamy Stadium when he lost the 1999 Ranji Trophy Final to Karnataka.

23 years, at the same venue, against a rampant Mumbai team who were aiming for their 42nd title, it was Chandrakant Pandit who was once again in tears- this time, though, happy tears as he coached MP to their maiden Ranji Trophy title.

“It is a great memory that I had left 23 years back (he lost the Ranji Trophy final as MP captain in 1998-99) and it is a blessing that I come back here, and winning this trophy was fabulous. It is emotional because I missed out as captain on the same ground,” Pandit said after MP thrashed Prithvi Shaw’s Mumbai by 6 wickets to claim the 2022 Ranji Trophy under the captaincy of Aditya Shrivastava. 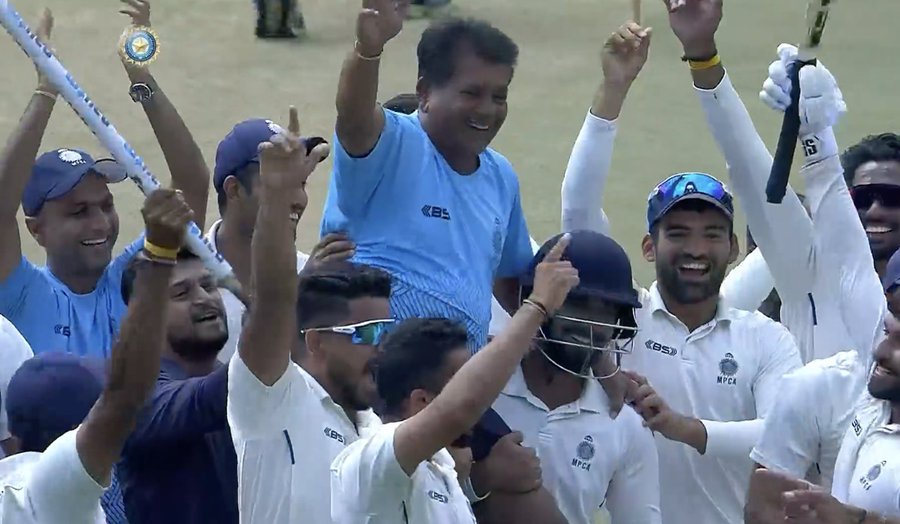 Mumbai had won the toss on Day 1 morning and under cloudy skies decided to bat first. The move didn’t work great as they found themselves 248/6 before Sarfaraz Khan, the Man of the Tournament and who finished the season as the highest scorer with 982 runs, hit a century to take them to a fighting score of 374.

But it was the MP’s batsmen who all but sealed the game in their first innings as three batters – Yash Dubey, Shubham Sharma and Rajat Patidar – notched up centuries helping MP take a 162-run lead by the evening of Day 4. The first innings lead meant MP would win the match if the game ended in a draw.

Hence, Mumbai had to force the issue with the bat in their second innings. They scored runs quickly, at more than 4.5 an over, but also lost wickets regularly while playing attacking shots. Mumbai managed a total of 269 and set 108 to win for MP which they duly did inside two sessions on the fifth day.

23 years back a teary-eyed Chandrakant Pandit the captain left Chinnaswamy Stadium after MP lost to Karnataka in the final. In 2022, Pandit the coach guides MP to their maiden Ranji Trophy. What a story. pic.twitter.com/7OmJWNdKCl

Congratulations Madhya Pradesh on winning the #RanjiTrophy2022! We’ve witnessed some terrific performances throughout the season. Great efforts by everyone @BCCI for ensuring another successful Ranji season amidst the pandemic. pic.twitter.com/qMxmvUNYZf

This is for Chandrakant Pandit, he was in tears when Madhya Pradesh lost in the 1999 Ranji Trophy final as a captain and 23 years later, he won the Ranji Trophy title for his state team as a coach. pic.twitter.com/l9GlEpjGof

Many congratulations to Madhya Pradesh on winning the Ranji Trophy.
Great focus and dertermination to beat 41-time champion Mumbai.
MP deserves all the laurels and glory, have some bright talent and this is truly a historic day for them. #RanjiTrophyFinal pic.twitter.com/4YtGEqbOlP

Rajat Patidar has had a season to remember as he helped Madhya Pradesh lift its maiden #RanjiTrophy title defeating Mumbai. 🤩

Madhya Pradesh won their maiden #RanjiTrophy title. It’s been a collective performance from this team throughout the tournament. Beating this powerhouse team – Mumbai in the final is not everyone here would have predicted, but here they are standing near the champions board.