There was a huge cheer from the few-thousand crowd at The Village stadium, Malahide in Dublin when Hardik Pandya at the toss announced that fast bowler Umran Malik will be making his debut in the first T20I vs Ireland.

On social media, though, it had been confirmed about half an hour before the toss when the BCCI uploaded pictures of Malik getting his debut cap from senior pacer Bhuvneshwar Kumar in the team huddle.

Here, check out the images of Umran Malik getting his debut India cap:

A dream come true moment!!Congratulations to Umran Malik who is all set to make his T20I debut for #TeamIndia

Malik was part of the Indian squad that hosted South Africa in 5 T20Is earlier this month but didn’t get a game as the management played the same eleven in all five matches. In Dublin, he gets into the team in place of Harshal Patel.

Speaking at the toss, first-time skipper Hardik Pandya expressed great joy and excitement as Malik gets in the eleven. “Umran makes his debut – young talent, very exciting with raw pace. Excited to see what he brings,” Hardik said.

Malik had forced his way into the Indian squad on the back of a scintillating, breakthrough IPL 2022 for the Sunrisers Hyderabad. 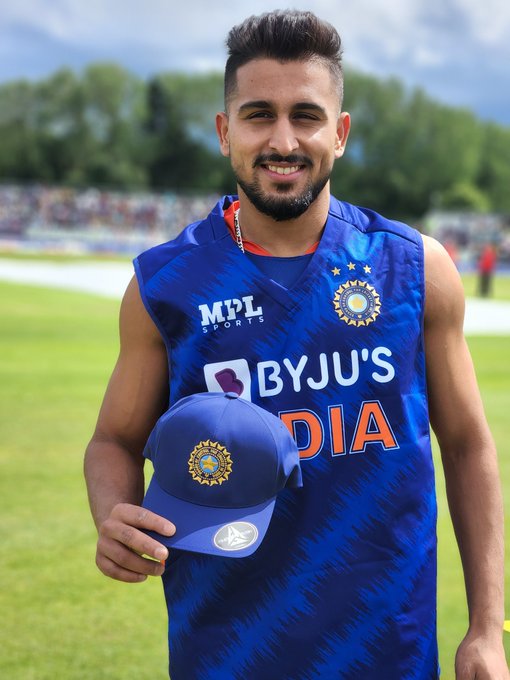 Malik had his breakthrough IPL season – only in his second year in the tournament – as he snapped up 22 wickets in 14 matches, including a memorable five-wicket haul, albeit in a losing cause, versus eventual champions Gujarat Titans. He rattled many fine batsmen – including Shreyas Iyer and Hardik Pandya – with his extreme pace as he even touched the 157 KPH marker.

This addition of Malik in the playing eleven is an indication that the selectors and the team management consider him a serious prospect to get into the T20 World Cup squad in fast bowling-friendly conditions in Australia.

As for now, fans celebrated Malik’s T20I debut on Twitter.

Here are some of the best tweets on Malik getting his maiden India cap:

This is NOT a drill!

Umran Malik making his India debut in the first T20I against Ireland – He got his cap from SRH teammate Bhuvneshwar Kumar.

Wishing you all the best, Jammu Express! pic.twitter.com/GwxolmaSoR

Just In| Pace sensation #UmranMalik set to make his debut for India.
He gets 🧢 No.98 pic.twitter.com/mjdWZmnumf

Umran Malik is all set to make his T20I debut today! 🇮🇳

Also Read: Prithvi Shaw Is Getting Slammed After His Heated Argument With Umpire In Ranji final