Deepak Hooda is having the time of life with the bat in hand. Following a thunderous Syed Mushtaq Ali season, where he smashed 294 runs in 6 matches for Rajasthan at a strike rate of 168, and the IPL 2022, where he further scored 451 runs for Lucknow Super Giants at a strike rate of 136, Hooda continued his supreme touch and notched up his maiden T20I fifty in the second T20I versus Ireland, on Tuesday.

Hooda had missed his fifty in the first match couple of days ago when he whacked 47* off 29 balls after being asked to be the make-shift opener following Ruturaj Gaikwad’s in-game injury.

Today, Hooda once again got in early after the fall of opener Ishan Kishan in the third over to Mark Adair. As if Hooda didn’t have any break between the two T20Is, the right-hander continued on the intent-filled aggressive approach he batted with in the first match and on the fifth ball he faced, he launched seamer Adair for a maximum. 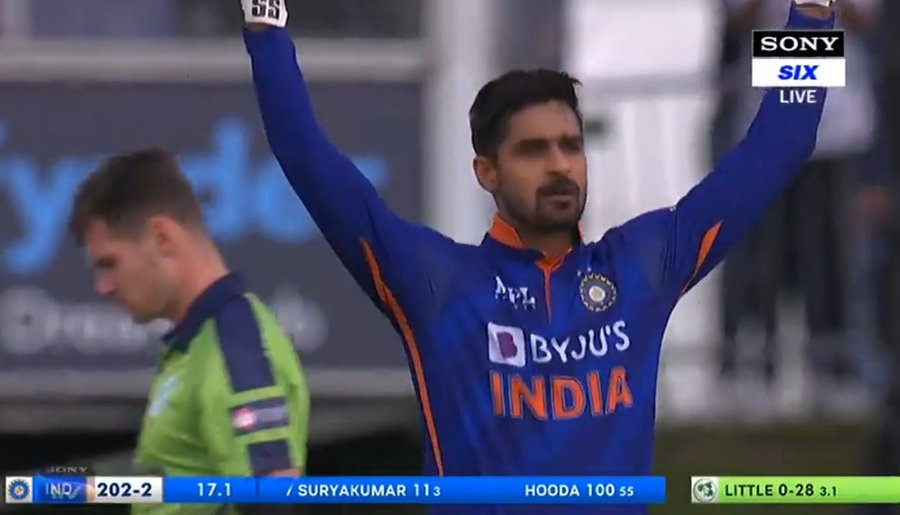 Looking to make full use of the powerplay fielding restrictions, Hooda then thumped seamers Joshua Little for two fours and seamer Craig Young for a six, taking 25 runs in 16 balls he faced in the powerplay.

After being dropped by Paul Stirling, a tough catch though, Hooda grew in intent, walloping Andy McBrine for a couple of maximums before bringing up his maiden T20I fifty with a single off 27 balls.

With eyes set in, there was no stopping Hooda from thereon; Ireland started to lead runs from both ends as Sanju Samson also notched up his maiden T20I fifty and took the toll of some ordinary bowling and poor fielding.

Hooda cracked four boundaries and a six in the 10th and 11th overs before the 14th brought him another pair of four and a maximum as he raced into the nineties.

Before Hooda brought up his century, the pair created the record for the highest partnership for any wicket for India in the shortest format, surpassing the 165-run stand by Rohit and KL Rahul from 2017 vs Sri Lanka, finishing with 176 off 87 balls.

Hooda slowed down as he neared his century, dealing in singles and doubles; he was 92 off 47 and then was 99 off 54 balls, before another tapped single on the off side brought up his three-figure score. The helmet went off, the head looked up in the sky, the arms held high, a nod to acknowledge the huge cheering from the crowd.

Here are some of the best Twitter reactions to Hooda’s maiden international ton:

Hooda smashed length deliveries for boundaries!! Kohli’s place in the T20I eleven is not safe at all now with Hooda, SKY eyeing for one position.

Maiden T20I hundred for Deepak Hooda, he has been one of the most consistent batsmen in the last 8 months in this format for various teams. pic.twitter.com/lwf0u25MVg

So happy for Sanju Samson. First half century for Indiaim T20I’s. And loving the partnership with Deepak Hooda by the way.

Deepak Hooda hit one six out of the ground – this is crazy batting from Hooda.

Hundred for Deepak Hooda. 4th Indian man to hit a ton in T20Is (Raina, Rohit, KL are others). Feel he’s a certainty for T20 WC: can bat anywhere, bowls a bit & an excellent fielder. Won’t be surprised if he plays the 2023 WC

Deepak Hooda has made every opportunity count this year.

Bailed his team out of trouble time and again in the SMAT20 trophy.

Did the same thing for LSG in the IPL – finished with 450+ runs.

And now delivering as a top-order batter in Indian colours.#IREvIND

Deepak Hooda now only the fourth Indian batsman to score a T20I hundred. That’s come only in his third T20I innings. @HoodaOnFire is actually on fire today…

Absolute treat to watch Hooda vs spin. Uses his feet, can slog sweep as well and plenty of power results in that crazy elevation.

Deepak Hooda is the first Indian to score a men’s international hundred in Ireland.

Previously the highest for IND in IRE was 99 by Sachin Tendulkar in 2007 (against South Africa).#IREvIND