Finally, after averaging just 14 in 13 T20I matches for India, Sanju Samson has got his moment in the sun donning the national colours as he raised his maiden T20I fifty, on Tuesday, in the second T20I versus Ireland in Dublin. Samson came into the eleven as an opener replacing Ruturaj Gaikwad who sustained a niggle in the first T20I and didn’t come out to bat.

Samson started off his knock with a thickish outside edge that raced to the boundary and a gorgeous straight drive in the second over set the tone for his knock. After his opening partner, Ishan Kishan’s dismissal, as Deepak Hooda came and clattered sixes, Samson was content in stealing boundaries regularly, both took the powerplay total to 54/1. 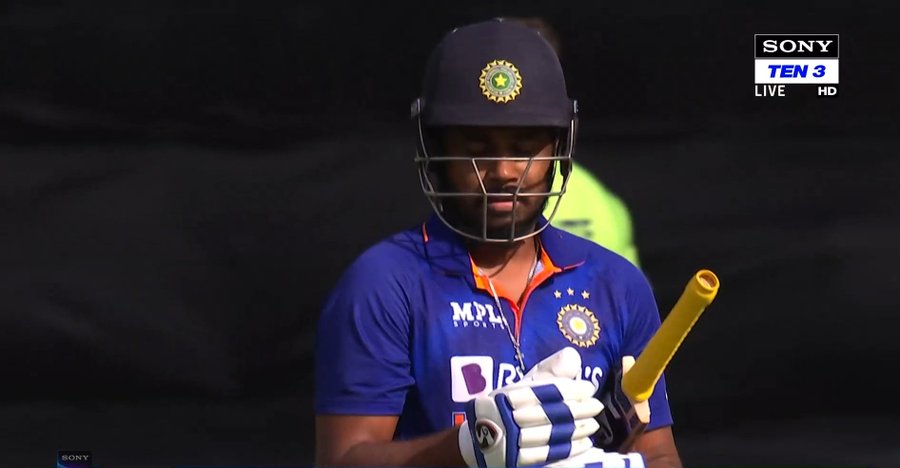 What came next blew Ireland away in the next eleven overs as both Samson and Hooda stepped on the paddle. Both brought up their maiden T20I fifties and Hooda went on to convert it into a three-figure (104 off 57 balls with 9 fours and 6 sixes) score while Samson fell for 77 off 42 balls, walloping 9 fours and 4 sixes.

Before Hooda brought up his century, the pair created the record for the highest partnership for any wicket for India in the shortest format, surpassing the 165-run stand by Rohit and KL Rahul in 2017 vs Sri Lanka, finishing with 176 off 87 balls.

Such was the havoc caused by these two right-handers that only the best economy of any Ireland bowler was 8.8, followed by 9.5; rest two leaked over 10 runs and over and two more over 15!

Sanju Samson’s exclusion from the eleven in the first T20I was met with great furore on social media; while his inclusion in the eleven today was met with huge cheer at the ground.

Twitter was ablaze with Samson finally doing some justice to his hype, talent and potential in India colours.

Here are some of the best Tweets on Samson’s maiden T20I fifty:

Well played Sanju Samson 77(42) that’s a crazy stuff from you and we had been waiting to see this kind of inning from you for a very long time#SanjuSamson pic.twitter.com/UEfLpKYOIL

History: Deepak Hooda & Sanju Samson added 176 runs for the 2nd wicket – highest for any wicket for Team India in T20I.

So happy for Sanju Samson. First half century for Indiaim T20I’s. And loving the partnership with Deepak Hooda by the way.

And after that Hooda & Samson show. Selectors’ headache has nicely turned into a migraine.#T20WorldCup

Well played Samson, that was a top ball Adair. Top knock from Sanju.

There was a huge debate about Sanju Samson’s place in T20Is and he has proved to everyone how deserving he is by scoring his maiden T20I fifty. pic.twitter.com/R1a4oSCz2S

77 (42) on his comeback. This is Sanju Samson. 🇮🇳 pic.twitter.com/yLE1fHUDQK

What a knock by Sanju Samson – 77 from 42 balls with 9 fours and 4 sixes. He opened the innings tonight and with Deepak Hooda, he put on a show. Really happy for him, he played excellently. pic.twitter.com/sbnTtwPJue

Sanju Samson gets his first T20I Fifty. One that he has waited for a long time! Many more to come.