It was a proper humdinger between team India and Ireland to cap off the series that showcased some thrilling power-hitting across both T20Is, with the visitors clinching a close 4-run win on Tuesday and take the series 2-0.

Ireland showed a much greater fight today than they did a couple of days ago and even threatened to project an upset – even though this was a second-string Indian team – as they came very near to India’s total of 225, falling short by just four runs! Team India skipper Hardik Pandya won the toss and elected to bat first. Ishan Kishan got out as early as in the third over but then opener Sanju Samson and number 3 Deepak Hooda proceeded to create a new record with their blistering power-hitting: The pair created the record for the highest partnership for any wicket for India in the shortest format, surpassing the 165-run stand by Rohit and KL Rahul from 2017 vs Sri Lanka, finishing with 176 off 87 balls.

Both brought up their maiden T20I fifties; Hooda went on to convert it into three figures (104 off 57 balls with 9 fours and 6 sixes) score while Samson fell for 77 off 42 balls, walloping 9 fours and 4 sixes. They took India to over 200 in the 17th over, however, the next set of batters couldn’t give the visitors a desired flourish – India scored only 12 runs in the last two overs – to finish with 225/7.

What at halfway stage looked like a comfortable win was suddenly made interesting by Ireland openers Paul Stirling(40 off 18) and Andrew Balbirnie (60 off 37) with their 72-run opening stand in 34 balls.

Although the hosts lost 5 wickets in space of 8 overs, Harry Tector, their best batter from the first T20I held the innings with his 39 off 28. Ireland needed 37 off three overs but George Dockrell (34 off 16) and Mark Adair (23 off 12) not only kept the hosts alive, but, in fact, brought them on the brink of victory with 7 needing off the last two balls. 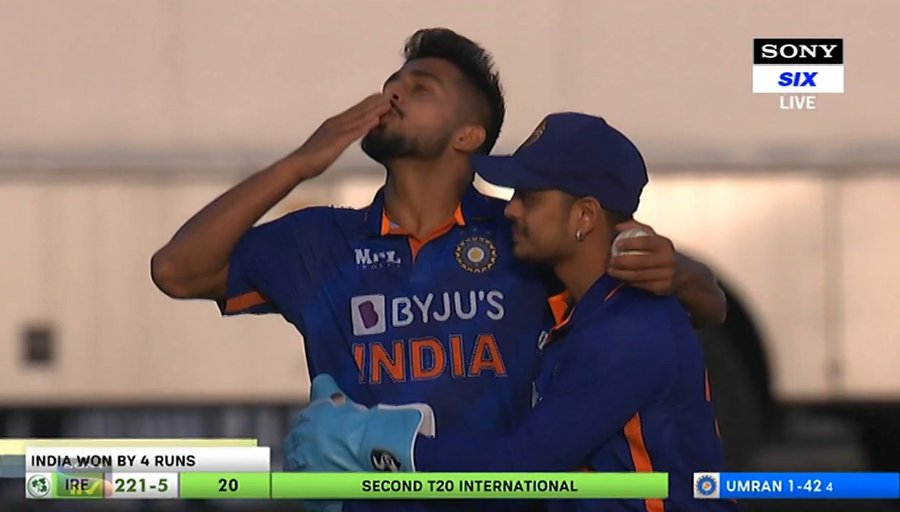 Umran Malik, fortunately for India, nailed his yorker on the penultimate delivery when the batters sneaked a bye, and then on the last ball hit the full length at a high pace not giving enough room for Adair to get under it and saved India.

Twitter went into madness as the game got close. Netizens applauded Bhuvneshwar Kumar, who bowled a great 18th over, conceding only 9 runs, the staggering partnership between Hooda and Samson, Ireland’s great fight, and also praised young Umran Malik for keeping his nerve in the last couple of balls.

Here are some of the best reactions to thrilling finish to Team India-Ireland encounter:

Questions for India going ahead

After reaching 91 off 45 balls, Hooda took 10 balls to get to 100. The slowdown almost cost India the game.

We lose by four runs. #BackingGreen in association with #Exchange22 and #ABDIndiaSterlingReserve ️

Axar Patel went for 12 runs in his 2 overs(6 RPO) while everyone else went 9 runs or more per over.

Highlights the importance of having a good defensive spinner in a T20 setup,few ill timed floated up deliveries here or there could have meant India losing the game.#IREvIND

Brilliant from Umran to keep his calm. Heartbreak for Ireland. You gotta feel for them

[email protected] You have India’s ️ . Thoroughly enjoyed the competition between the two sides in both games. #IREvIND #CricketTwitter

Ireland didn’t end up on the winning side but make no mistake, this has been a brilliant chase! They kept India under pressure right from the beginning and showed good composure in the death overs as well. Not easy to get anywhere close to a target of 226 on any track!#IREvIND

What a match, Ireland! Brilliant fight shown! To take it to the last over! And good job on holding your nerve, Umran Malik

Ireland team are the real winners, the fightback, 14th in ICC ranking, lost by just 4 runs while chasing 225 runs against India – this is massive for Irish.

So near, yet so far for Ireland. But a very spirited effort from them.

Umran kept his cool and bowled to his field in that last over.

Brilliant execution of yorkers under pressure by Bhuvneshwar Kumar. Just 7 runs and a wicket from that over, with the asking rate being just under 13 before the beginning of that over.#IREvIND

Kudos to Umran Malik for keeping such a calm head under pressure. Massive for any bowler playing just his second international match, that too after so little experience in domestic cricket! Important that Hardik Pandya trusted him to deliver as well. #IREvIND

And after that Hooda & Samson show. Selectors’ headache has nicely turned into a migraine.#T20WorldCup

History: Deepak Hooda & Sanju Samson added 176 runs for the 2nd wicket – highest for any wicket for Team India in T20I.