Unarguably England’s greatest white-ball captain, Eoin Morgan bid adieu to international cricket on Tuesday. This decision from the 2019 World Cup-winning skipper comes amid his struggles for form and fitness that had held him from keeping up to the international standards.

“After careful deliberation and consideration, I am here to announce my retirement from international cricket with immediate effect,” Morgan said in an ECB release on Tuesday. “To call time on what has been without doubt the most enjoyable and rewarding chapter of my career hasn’t been an easy decision, but I believe now is the right time to do so, both for me, personally, and for both England white-ball sides I have led to this point.”

Morgan, who made his Ireland debut in 2006 before switching allegiance in 2009, goes out as England’s leading run-scorer and most capped player in the two white-ball formats and was part of the England side that won the 2010 T20 World Cup. 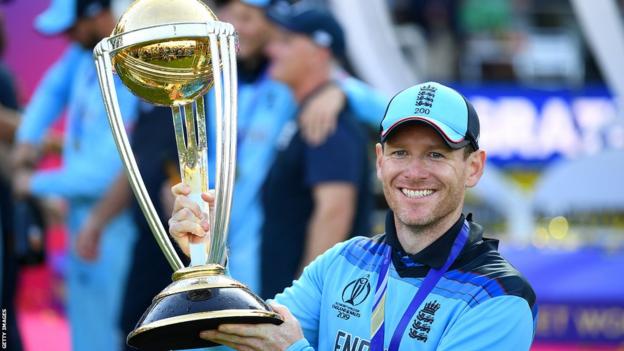 But his main act came as a captain: taking over the team languishing in the doldrums in 2015 to making them a world-beating, dominant unit, the Morgan led the Three Lions to their first-ever ODI World Cup title in a thrilling final vs New Zealand at Lord’s.

Indian batting legend Sachin Tendulkar took to Twitter to hail the mammoth contributions of Eoin Morgan to English cricket and the game in general, and wished him success for his new innings.

“Congratulations on a wonderful career, @Eoin16. You gave cricket fans several moments to cherish. Best wishes to you. May your 2nd innings be as successful as the first,” Tendulkar tweeted soon after Eoin Morgan confirmed his retirement.

Congratulations on a wonderful career, @Eoin16. You gave cricket fans several moments to cherish. Best wishes to you. May your 2nd innings be as successful as the first. pic.twitter.com/zLSvaluZQr

Morgan will continue to play domestic cricket and in franchise leagues – he is lined up to captain London Spirit in the Hundred later this summer – and also is expected to join the commentary team.