Picking India’s XI For The Rescheduled Fifth Test Against England 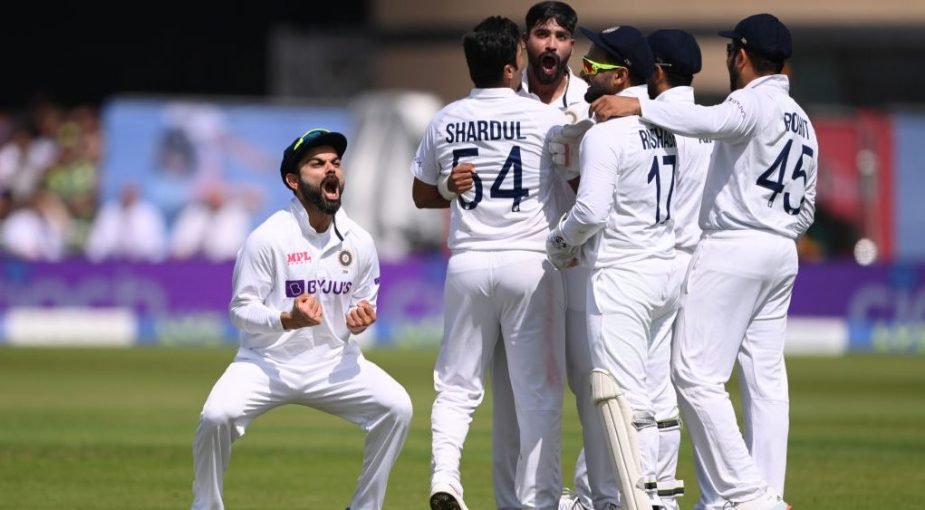 Close to a year after the series began, the rescheduled fifth Test will decide whether the Pataudi Trophy heads to India, or whether it ends up being shared between the hosts and visitors.

A lot has happened for both teams since India’s 2021 trip: under new captains and coaches, the teams willl be aiming to not only seal the final Test, but also attain important points in the World Test Championship cycle.

For India, the unavailability of KL Rahul and the potential absence of Rohit Sharma have been early setbacks, and the non-selection of Ajinkya Rahane opens up a slot in the middle order. It remains to be seen whether they pick Ravichandran Ashwin, infamously left out for the first four games.

Here’s an India XI that could face England in Birmingham:

Rohit Sharma is certainly not out yet, and a negative Covid-19 test would open his way back in. If he is unavailable though, India could push Vihari up the order: he’s done so before – albeit in a short, two-innings stint in Australia – and has the technical nous (and county experience) to counter early swing. A secondary aspect of his presence would be the availability of some off-spin, a useful supplement to Jadeja if Ashwin isn’t playing.

Contrary to his other opening partners, Gill has fortunately evaded illness and injury so far, and remains India’s first-choice option. The last year has been difficult for him: after an impressive start, form and fitness have pushed him down. He last played a Test in November, but strung together a set of impressive starts in the practice game, suggesting that he isn’t too far from finding his touch. Players like Gill need game time. That’s where the future lies.

Pujara’s run-heavy county season certainly bodes well for India: more than anything, it’s the confidence that he would have garnered getting bucketloads of runs in English conditions through his Sussex stint. At No.3, he is critical to India’s fortunes, and if he can play a typically long innings in the middle, India’s series lead will remain secure.

England tours have been significant milestones in Kohli’s career, for better or for worse. This one, although a one-off Test, could induct much-needed life into his dwindling returns if he hits form. In 2021, he teased with a couple of fifties, and also chipped in with a fine 67 in the practice game. If he’s not nicking one off early, a return to normality could be on the cards.

Not everyone’s convinced with his all-condition credentials as a red-ball batter, but he’s done everything asked of him so far. A century and three fifties in his first seven innings scream of a youngster itching to get more chances, and a crucial Test such as this one is a good place to start. If Iyer goes big, it could go on to define what India’s future middle order looks like.

After struggling to create a resounding impact in white-ball cricket this year, Pant returns to the format he seems to be most comfortable in. Pant’s exploits have set up famous wins overseas in the past, but he wasn’t his usual self during the 2021 trip to England, managing just the one fifty in nine innings.

In conditions that are set to assist the quicks, Jadeja might end up being the only frontline spinner. It’s not his only responsibility: over the years, Jadeja’s waltzed to several match-turning cameos, and already has three fifties to his name in England. Against a team that’s going to counter-punch with its middle order, India needs some flamboyance of their own, and Jadeja could do just that from No.7.

There’s something about Thakur that compels India to pick him: some dub his all-round skills the x-factor of the side, others just pin his success down to great game awareness. The presence of a seam-bowling all-rounder is always a welcome sight in the India Test team, and even though Thakur is not exactly one in the traditional sense, his nagging medium-pace is supplemented well with some useful lower-order run-making. It would be interesting to see how he counters England’s all-out batting approach.

Shami’s grown from strength to strength over the last few years, but still hasn’t quite been his best in England, where he averages 38.83, the highest among all the countries he’s travelled to. It’s a place that suits his style though – lateral movement and skiddy pace define his bowling – and he was an integral part of India’s 2-1 series lead last year, picking up two four-fours on India’s extended England trip that also included the World Test Championship final.

India’s trump card when it comes to overseas Tests. After a quiet first half in 2021, Bumrah really came to the fore in England, and is currently leading India’s wicket charts on the tour, with 18 wickets at 20.83. England’s belligerent approach could be thoroughly tested by Bumrah’s rapid in-swingers and tight lines. Also, if Rohit is unavailable, Bumrah is next in line to lead the side.

The early inroads could come at the hands of Siraj, who’s already created a name for himself in the Test team over the last year and a half. At Lord’s last year, Siraj’s twin four-fors set up a memorable India win, and he’s currently behind only Bumrah in the series wicket tally for India.

From Getting Banned To Man Of The Series For India