Play on Day 2 of the Sri Lanka-Australia first Test in Galle Stadium was delayed for more than 2 hours after the rain had begun falling 90 minutes prior to the scheduled start, with strong winds blowing in off the coastline that caused a major accident in the stadium.

The roof on a makeshift grandstand at the Galle International Stadium collapsed due to the heavy rain and wind at the venue which further delayed the start of play on Thursday.

“Ground staff managed to keep the entire ground covered as the rain blew in sideways, but metal sheets secured by ropes covering the small concreted seating area on the eastern side of the ground blew off,” The Guardian reported. “The entire roof then buckled, with officials now considering how to secure the metal before play can begin.” 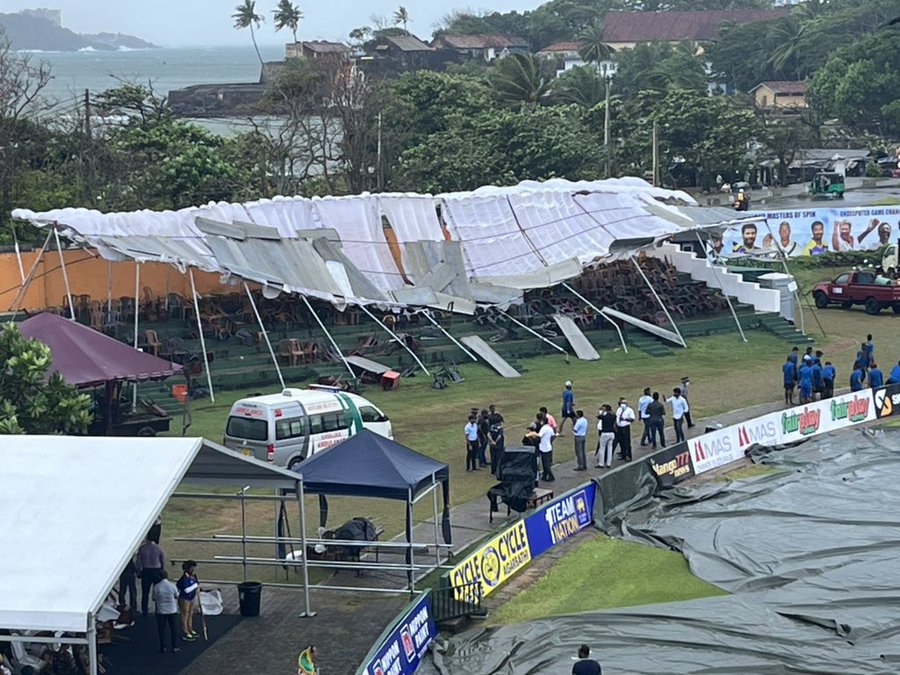 Thankfully, no spectators were in the stand at the time, with Australia’s team only just arriving at the ground.

Rain also continued to fall past the scheduled start of play of 10am local time, with ground staff struggling to keep the entire outfield covered amid the gusts of wind. Even tyres were used to “keep some sections of tarpaulin down on the ground, however other pieces covering the outfield have been blown away.”

Check out some viral pictures:

All happening. Organised chaos though in fairness – the locals have seen this one before. #SLvAUS pic.twitter.com/VJra6n3LWX

The weather is so intense here at Galle that a small enclosure/stand has just collapsed. #SLvAUS pic.twitter.com/uBkzKONxBP

Farewell, friend. It’s like we never knew you. #SLvAUS pic.twitter.com/HXVZJ97jvd

Australia resumed their first innings on 98/3 in reply to the hosts’ first innings score of 212. However, the visitors, who had lost the big trio of David Warner, Marnus Labuschange and Steve Smith on Day 1, further lost Travis Head soon after play began.

Earlier, off-spinner Nathan Lyon took a five-wicket haul and leg-spinner Mitchell Swepson bagged three to bundle Sri Lanka for 212. The pitch has been playing tricks since the first session with the balls turning big and square and gripping on the surface with dusts of puffs coming out regularly.

Australia, who had won the T20I series but lost the ODI series, have their hopes on opener Usman Khawaja, the left-hander who had played a significant role in their series win in Pakistan earlier this year.

Quiz! Name Every Player From The 2021 England-India Test Series