Jasprit Bumrah Took A Stunning Catch To Dismiss Ben Stokes: Shardul Thakur had an eventful morning on Day 3 of the Edgbaston Test vs England as first he dropped a sitter of a catch of Ben Stokes but then later redeemed himself by dismissing the England captain, but not after skipper Jasprit Bumrah had also dropped Stokes.

England started the day at 84/5 with Stokes yet to get off the mark. He did get off the mark with a boundary off Bumrah. With the Indian bowlers on top, Stokes decided to attack his way through the innings.

Unlucky on one more day, Mohammed Shami beat Stokes on his edges but was also clattered by the left-hander for three fours before the belligerent, in-form Jonny Bairstow stepped on the paddle as both upped the run-rate and put the pressure back on the Indian bowlers.

Shardul Thakur drops Stokes but then dismissed him

Finally, on the first ball of the 36th over, Mohammed Shami managed to elicit a false shot from Stokes and the batter charged down and miscued it high up in the air. Standing at the cover position, Thakur had plenty of time to judge the ball and rightly settled himself under the ball, however, he went reverse cup and put down the catch! 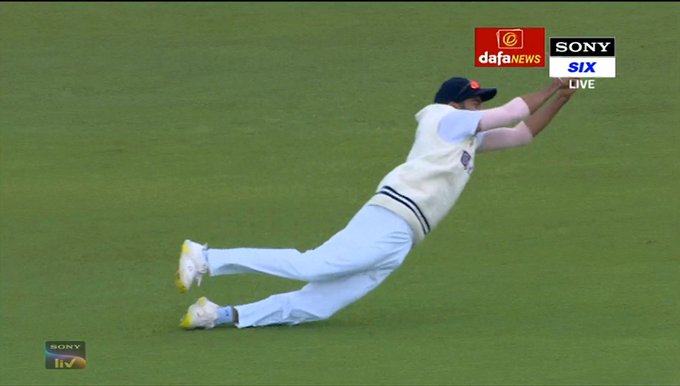 Two overs later, Thakur was called up in the attack for the first time in the innings and the Palghar seamer delivered Stokes’ wicket in his first over. But, that came with some drama.

On the third ball of the over, Bairstow charged down to Thakur and hit it straight to mid-off where Bumrah dropped the catch as the ball spilt out of his hands.

But the Indian skipper quickly moved on from that, and took a stunning catch on the very next delivery as Stokes once again danced down the pitch and hit it to left of Bumrah who leapt and managed to keep his hold on the red cherry.

Here’s the video of Jasprit Bumrah taking a brilliant catch:

A pretty special catch. It’s been an enthralling morning.

Netizens hailed Bumrah, who has already had an excellent game with both bat and ball, for his extraordinary catch that got rid of the English skipper.

Boom can do no wrong this test. https://t.co/jSptCybBoG

what a game boom is having https://t.co/M9h4SUVwIA

5 Most Expensive Overs In Test Cricket