IND vs ENG: Shubman Gill Is Getting Trolled After Yet Another Failure

After scoring 17 runs off 24 balls in the first innings, Shubman Gill managed only 4 runs in the second innings of the ongoing Edgbaston Test against England. He suffered the same fate in the second outing as he did in the first: b James Anderson c Zak Crawley.

Shubman Gill Failed To Make It Big Once Again

In the first innings, Gill had looked good, stroking 4 classy, elegant boundaries but gave it away with one shot too many, going after a length delivery outside the off-stump and edging it to Crawley.

In the second innings, though, it was some masterful bowling by the veteran James Anderson that succumbed Gill in the first over itself. On the second ball of the innings, Gill timed his straight drive well to a full-length delivery and it raced away for a boundary. 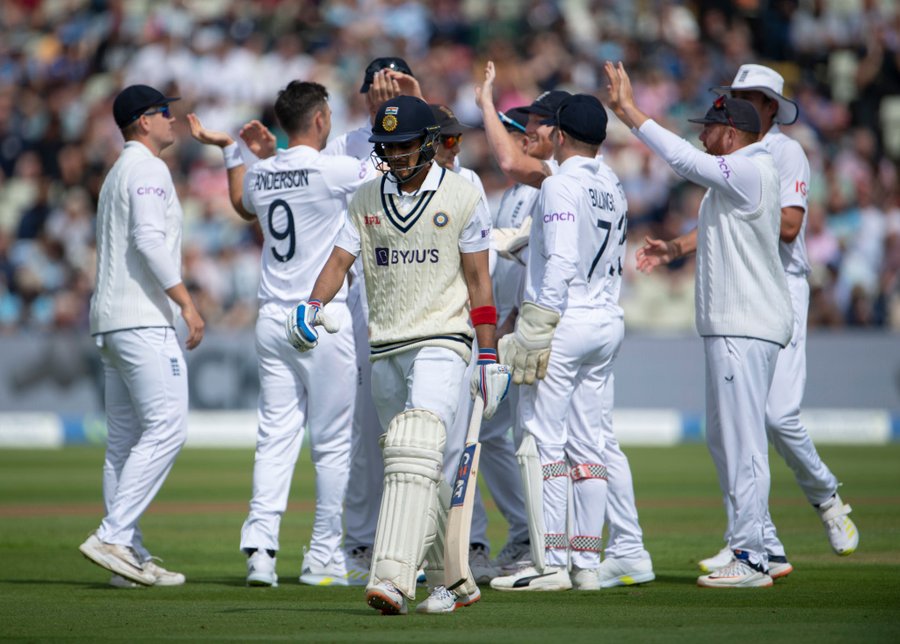 But on the very next delivery, Anderson got his length absolutely correct: he pushed his length back and the ball seamed in with extra lift. Gill tried to defend it but edged it to second slip, to Crawley again.

Shubman Gill got off to a great start in his Test career, in Australia on the 2020/21 tour. In 6 innings in Australia, Gill returned with 259 runs at an average of 51, including a memorable 91 in the Gabba victory.

However, since then, the opener hasn’t played any remarkable knock. After the Australia, tour, Gill has managed a below-mediocre average of 22 in his last 15 innings with just a couple of fifties, both coming in home Tests on good surfaces. Although, the fact cannot be ignored that Gill hasn’t had a long run either in the side because of his regular injuries in the past year.

Nonetheless, time is maybe ticking for Gill as Rohit Sharma and KL Rahul will take back their positions when they are fit for the next series; there had also been suggestions about Gill being tried in the middle-order, but that is for hold at the moment, for his mistakes outside the off-stump will hurt him at any position he bats.

Netizens trolled Gill heavily on Twitter after his second cheap score in the game. Here are some of the reactions:

Gill is the Prince Jo gaddhe me gira tha

Not one good performance, still unreal dickeating by kohli fans

Shubman gill is only 27yo yrr plss dont hate him he has a good jawline, Only bad thing is that he has 101:01 ratio of good innings

Shubman Gill thanking his stars that he doesn’t have to face Bumrah in Tests!

James Anderson dismisses Shubman Gill for the 4th time in Test cricket. Beautiful from Anderson, he strikes in the first over.

Shubman Gill is there in the team for pitch inspection.

Shubman Gill fulfilling the prophecy that he is going to be #India’s next Virat Kohli#IndvsEng https://t.co/ut55EHwq5q

What Could Jonny Bairstow Go On To Achieve In Test Cricket?