Most Runs in a Single Over in Tests 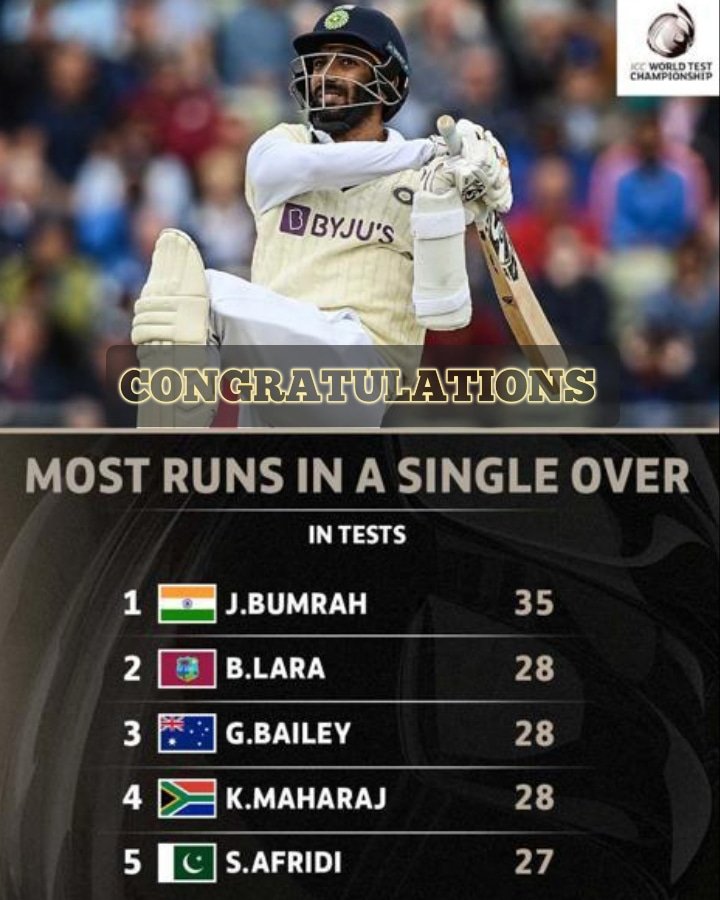 Test cricket is about temperament, discipline, and elegance. But sometimes batters tend to be aggressive and make it look like the shortest format of the game. Nobody can ever imagine a batsman going after a bowler for 20 runs in an over in test cricket. But some players have done it with ease and puzzled the world as no one expects test cricket to be played like T20 cricket. Let’s have a look at the players with the most runs in a single over in tests.

It’s unbelievable but Indian Speedster Jasprit Bumrah has scored the most runs in a single over in a test match. Bumrah smoked Stuart Broad all over the park in the 5th reschedule test of the 2021 India tour of England in Edgebaston. The newly appointed Indian skipper bashed Broad for 4 fours and 2 sixes against the bowler with 550 wickets. Bumrah Broke Brian Lara’s record of 28 runs in an over. The batting record by a fast bowler took the whole globe by storm.

The second place on this list is occupied by the great, Brian Lara. Lara smacked South Africa’s Robin Peterson for 28 runs in an over in a test match in Johannesburg in 2003. Lara showed no mercy to the left-arm spinner and hit 4 fours and 2 sixes in a classy manner. The record stood for 19 years before Bumrah shattered in 2022.

Former Aussie batsman, George Bailey smashed one of the greatest pacers of all time, James Anderson, for 28 runs in an over, the embarrassing moment occurred in the 2013 Ashes series. Bailey made the Perth crowd dance to his own tune with 3 sixes and 2 fours.

South African left-arm spinner, Keshav Maharaj has also made it to this list. Maharaj hammered Joe Root for 28 runs with the help of 3 fours and 2 sixes in an over in Port Elizabeth in 2020. Nobody expected Maharaj to turn into a beast that day but as they said cricket is unpredictable.

Known as Boom Boom Afridi, Shahid Afridi’s name on this elite list does not surprise cricket fans. Afridi charged Harbhajan Singh for 27 runs in the Lahore test in 2006. Afridi has always hit the spinners no matter how good they are. Four gigantic sixes were hit to achieve this feat.

Most Runs in a single over in Tests