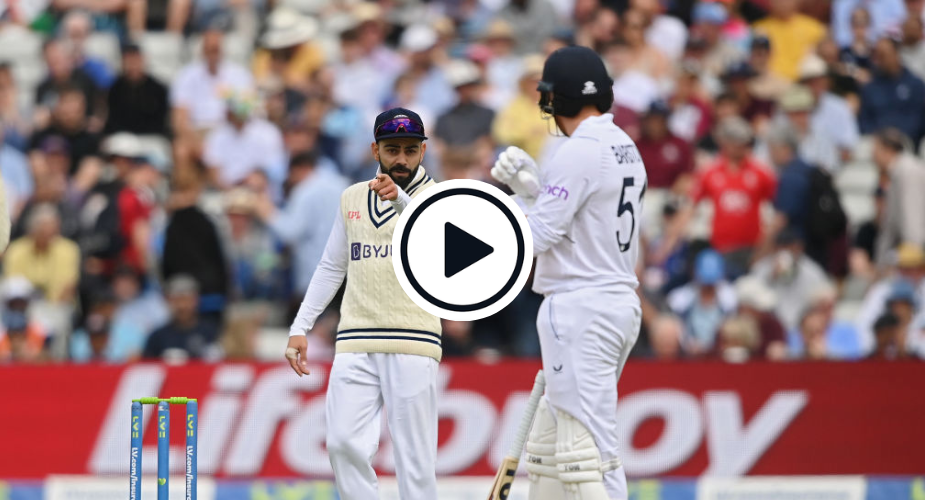 Watch: Virat Kohli and Jonny Bairstow were involved in a heated verbal altercation on day three of the fifth Test between India and England at Edgbaston.

The incident occurred just before the second ball of the 32nd over. Mohammad Shami was bowling and had beaten Bairstow a ball earlier. The latter then had a mid-pitch conversation with skipper Ben Stokes. However, he returned to the striker’s end, he was seen having a conversation with Kohli. It wasn’t clear what exactly was said but both individuals were animated. Umpires Aleem Dar and Richard Kettleborough intervened to bring the conversation between the two players to a halt. Afterwards, Stokes and Kohli were seen having a more cordial discussion, with the former Indian captain putting his arm around Bairstow’s shoulder during that sequence.

Prior to this heated exchange, Bairstow had scratched his way to 13 off 61 balls. Shortly after the incident, though, he was aggressive, ultimately smashing a 119-ball century. This was his third hundred in as many games and it dug England some way out of trouble, with the hosts having slipped to 83-5 at one stage. Bairstow eventually perished to Shami when he wafted at a delivery outside off stump.

The right-handed batter’s knock also allowed England to avoid the follow-on. Alongside Sam Billings, Bairstow stitched together a 92-run partnership, ensuring that England had an acceptable first-innings total to play with. India, though, remained in control, having bowled England out for 284 and having fashioned a 132-run lead.

It’s tense out there between Virat Kohli and Jonny Bairstow #ENGvIND pic.twitter.com/3lIZjERvDW