Jasprit Bumrah is having a memorable captaincy debut in the Edgbaston Test against England.

Bumrah, who was named the skipper for the first time after Rohit Sharma was ruled out due to covid-19, made his first mark on the game with the bat, consigning England seamer Stuart Broad to the most expensive over in Test cricket where Broad conceded 35 runs, 29 of which came off Bumrah’s bat.

With the ball then, Bumrah gave a superb to India in England’s first innings, cleaning up their top three as India took a healthy lead. India were bowled out for 284 in their second outing, setting up a target of 378 runs for England to level the series.

In pursuit of 378, England opener Alex Lees and Zak Crawley started off in spectacular fashion, bringing up the century opening stand inside 20 overs.

With India desperate for wickets, skipper Bumrah returned and struck twice, on either side of the Tea break, to pull the game back in balance. He first bowled Crawley with a sharp in-seamer while the batsman shouldered his arms; on the first ball after Tea, Bumrah had Ollie Pope nicking behind to Rishabh Pant with a ball that was angled in but straightened off the pitch.

India were right back in the contest and with Pope’s wicket, which was Bumrah’s 23rd scalp of this Pataudi 2021/22 Trophy – the most taken by an Indian pacer in a Test series against England, going past Kapil Dev’s tally of 22 wickets from the 1981/82 series in India. Among seamers, Bhuvneshwar Kumar is the next on this list with 19 victims from the 2014 tour. 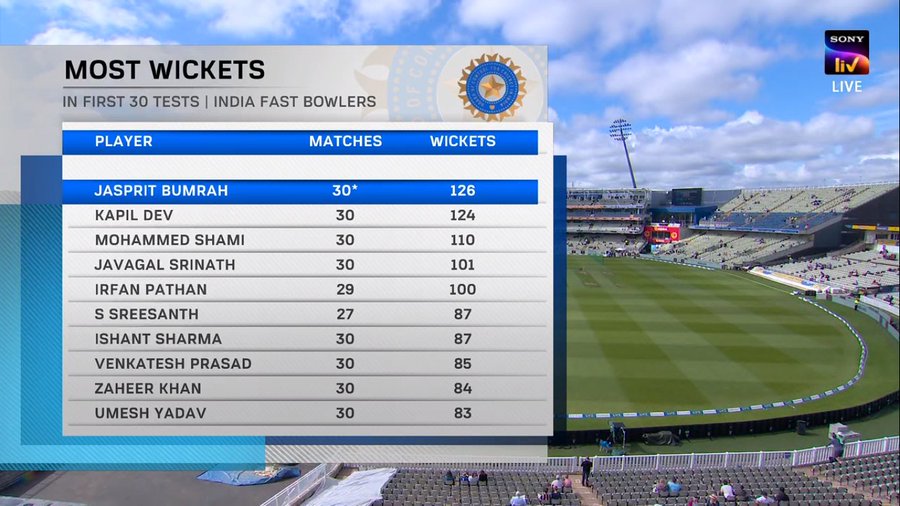 Most wickets for an Indian seamer vs England in a series:

Overall, BS Chandrashekar leads the chart for most wickets by an Indian bowler in a series vs England – the former leg-spinner snapped up 35 wickets when England toured India in 1972/73.

Marks Out Of 10: England Player Ratings After Their Edgbaston Victory Over India