Hardik Pandya is having a sizzling year, and, to think, a few months back, it was plenty gloomy and far away from the rosy of the present. Injuries, form, not bowling, his designated back-up, Venkatesh Iyer, doing well; there were big doubts about his future.

One IPL season and it all changed dramatically. Pandya led the debutant Gujarat Titans to the IPL 2022 title and then stormed back in India’s T20I eleven. With his performances against South Africa and against Ireland, where he even led the country for the first time, he once again showed why he’s rated as currently India’s best seam-bowling all-rounder. 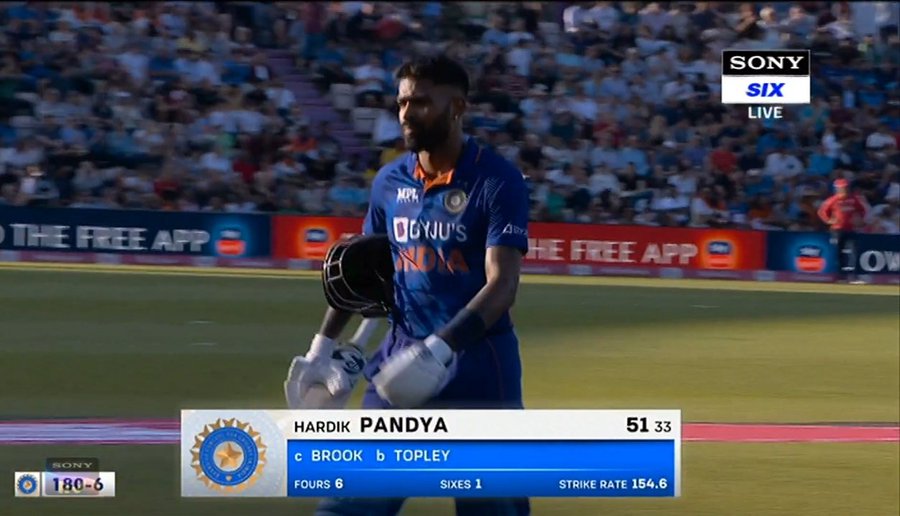 He’s got it to be even better by notching up his maiden T20I fifty, against England in Southampton. Pandya came in to bat at the score of 89/3 at 8.4 overs with India motoring along nicely at above 10 runs an over.

The template for the Indian team under the new regime of Rohit Sharma has been clear, which is to hit out early, remain positive, play attacking shots, up the scoring rate instead of looking to get your eye in first, put pressure on the bowlers.

Sharma led from the front with 24 off 14, followed by blazing 30s from Deepak Hooda and Suryakumar Yadav (both scoring at over 190). It was now his job to carry on the momentum on the platform that had been set. And he did it as expected.

Pandya straightaway took on leg-spinner Matt Parkinson for a couple of fours, showing his mood early on and then treating Livingstone in the same manner while also taking boundaries off seamers Tymal Mills and Sam Curran and was soon rumbling at a strike rate of little less than 200.

England tied Pandya down for a while before he broke that leash with a six to Parkinson and a single on the next ball brought up his first T20I half-century, getting warm applause from the dugout and a huge cheer from the crowd. Pandya, though, couldn’t go much after that as he holed out in the deep, attempting another maximum.

It was a crucial knock as that helped India close in on 200. Netizens on Twitter hailed Pandya for his outstanding innings today.

Here are the tweets lauding Hardik Pandya for his exceptional batting in Southampton:

Yuvraj Singh and Hardik Pandya are the only Indian players (Men’s) to score fifty and pick 3 wickets in a T20I match.

218 players have 500 or more T20I runs. Among them, Hardik Pandya was one of the only three players to score 0 fifties until today.

The other two won’t ever make it past zero – Albie Morkel & Daren Sammy. #ENGvIND

Well played, Hardik Pandya. He scored 51 runs from 33 balls including 6 Fours and 1 Six against England. This is his first T20I fifty, excellent innings from Hardik. pic.twitter.com/23yIm3ZAad

#TeamIndia post a target of 1️⃣9️⃣9️⃣, thanks to Hardik Pandya’s quickfire half-century and Suryakumar Yadav’s cameo.

MAIDEN T20I 50 for Chad HARDIK PANDYA
WHAT A KNOCK pic.twitter.com/1xkv4bOfCE

Hardik Pandya is having a ball. And the bat! What a night for him and possibly India too @hardikpandya7 #INDvENG

The luxury of Hardik Pandya, the all-rounder.. #EngvInd

When he’s at 100% Hardik really is a pretty amazing cricketer.

Hardik Pandya is the rockstar of the cricket world. 51 from 33, and now 3-6 after 7 balls. He is making things look too easy. #INDvsENG

Even Hardik Pandya’s biggest haters secretly love him, what a star