India captain Rohit Sharma has walked the talked about his intent and mindset in the two T20Is so far against England. In both the matches, Rohit gave India rapid starts, showing the intent and the change of approach Indian cricket has adopted in the shortest format.

In the first T20I in Southampton, Sharma scored 24 runs off 14 balls (5 fours) and in the second T20I, in Birmingham, the India skipper scored 31 runs off 20 balls with the help of 3 fours and 2 gobsmacking sixes.

It seemed as is the most destructive opening pair in the world when Rohit walked in the middle alongside Rishabh Pant, who replaced Ishan Kishan.

Sharma played the first ball of the match off David Willey cautiously but then looked to bludgeoned most deliveries after that. On the second ball only, Sharma aimed for the legside boundary with a big swing but only managed an edge. On the fourth ball, he once again attacked, this time on the offside and couldn’t keep the ball down and almost was caught by Jason Roy at point but the fielder dropped the catch. 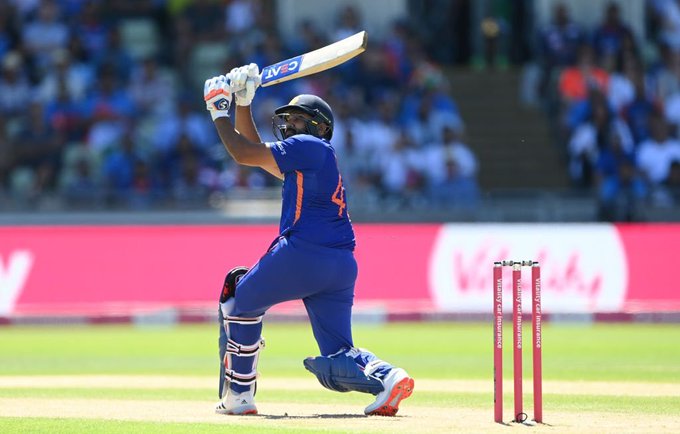 On the last ball of the first over, Rohit Sharma struck it well, launching Willey for a maximum over fine leg to set the tone of the powerplay, which India ended at 61/1. Sharma’s battled with Willey continued in the third over with the opener once again having the upper hand, a full ball outside off was dispatched over the fence for another maximum, before Pant picked up couple of fours.

Moeen Ali, who had dismissed Sharma in the previous encounter, was brought on in the fourth over. This time, though, the Indian skipper had his revenge as he walloped the off-spinner for two boundaries in an over.

Rohit whipped debutant Richard Gleeson for a four more but the debutant stormed back with a short delivery that took the glove of Sharma while he was hurried in his pull shot and Jos Buttler took a good diving catch as India lost their skipper and first wicket, but Rohit had provided a desired start.

Rohit Sharma was praised by fans on Twitter for his explosive start.

Rohit Sharma doesn’t play for the fifities, he plays for team. @ImRo45 those shots were 🥵🥵🥵

This approach led by Rohit Sharma has been the biggest positive in the last few months. pic.twitter.com/x5RRs3QwYn

Rohit Sharma is the first player to hit 50+ Sixes in the first 30 innings as T20I captain.

Rohit Sharma with a super six in the first over, what a start! pic.twitter.com/uIW1RIlm3M

Rohit Sharma has exploited the powerplays well in the last couple of years!#ENGvIND #CricketTwitter pic.twitter.com/Z5076oyTNM

The Fear Of Rohit Sharma pic.twitter.com/kDgnqujnSr

The thing with Rohit is even when he was failing for MI, he didn’t waste deliveries. And when he does score, he scores pretty quickly in T20Is. That is much better than KL’s 60 ball 75s

He used to be someone who would start slowly, then gradually build up pace.

Remember those numbers everyone used to share? Rohit after he reaches 30, 40, 50… etc?

He is not waiting for the onslaught anymore.

And I love that.

Rohit Sharma is giving an example of how a T20 opener should play like. Showed that intense intent. Need a big inning in the next match.
Well Played @ImRo45

Rohit Sharma is giving an example of how a T20 opener should play like. Showed that intense intent. Need a big inning in the next match.
Well Played @ImRo45