In his first 48 T20I matches for India, Rishabh Pant batted from number 3 to number 6. And on Saturday, in the second T20I versus England at Edgbaston, the left-hander opened for the first time in the shortest format at the international level, and that sent the fans in a frenzied mode.

An ultra-aggressive batsman, Pant’s promotion to the top came because of a jam in the middle-order.

India made four changes to the eleven that had thrashed the hosts by 50 runs in Southampton as the big guns returned to the side after the Test match. Virat Kohli, Rishabh Pant, Ravindra Jadeja and Jasprit Bumrah came in the eleven, replacing Ishan Kishan, Deepak Hooda, Axar Patel and Arshdeep Singh. 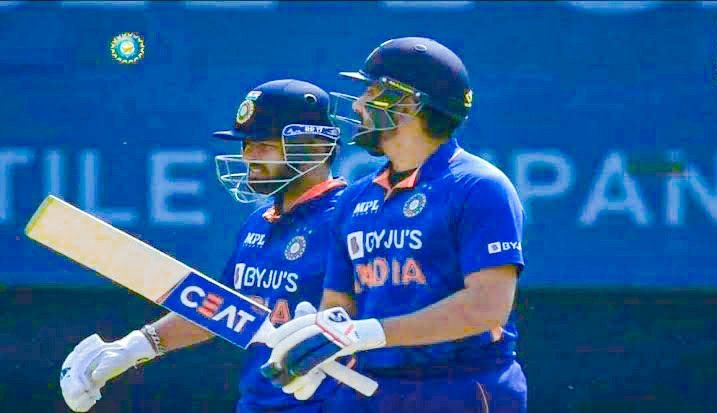 It was hard on Hooda, who had smashed a 17-ball 33 in Southampton and a match before that had raised his maiden T20I ton vs Ireland. But since Kohli has been the incumbent of the number 3 position, Hooda had to make way for the former captain.

And when it was revealed that Kohli is back and Kishan is out, it was anticipated that Kohli will open alongside Rohit Sharma in the second and third T20Is and Pant will bat at number 4 or 5 forming a strong middle-order with Suryakumar Yadav and Dinesh Karthik.

But, it was a surprise and also created excitement among fans when Pant walked in the middle along with Sharma to open the innings. Pant is coming off a thrilling century in the Edgbaston Test, where he hammered 146 runs in 111 balls and a fifty in the second innings too.

Before today, Pant had opened 16 times in domestic T20 cricket, wherein he averaged 38 at a strike rate of 165, according to Cricviz.

Fans expressed amazement at the prospect of seeing Pant as a long-term opening option or at least until KL Rahul is fit.

Here are some of the Twitter reactions to this news:

If Pant clicks in this position, kl can continue posting underwear ads sitting in nca forever

Just when we thought Pant opening experiment was done, India have done it again in t20is. Some promising signs tactics wise for India.

Pant to Rohit after he forgot his name at the toss. pic.twitter.com/UpsUqD4BgL

Been waiting for Rishabh Pant to open.

For India, for DC.

Time to turnaround that white ball game to another level.#EngvsInd

Earthquake of 7.2 Richter scale has been felt in Southampton as Rohit and Rishabh Pant are on crease together.

If these two can click together, would be the fiercest opening pair at the #T20WorldCup! @RishabhPant17 @ImRo45 🤝#ENGvIND

All these times during Pant’s bad form we were told we need a Leftie in our Middle Order. Now he is opening

Pant over Kishan as opener anyday>>>

Rishabh Pant finally opening the innings. This could be the change he needed to take off his T20 career. https://t.co/Ld1jDlSmi7

Rishabh Pant finally opening the innings. This could be the change he needed to take off his T20 career. https://t.co/Ld1jDlSmi7