Marks Out Of 10: Player Ratings For India After Their 2-1 T20I Series Victory Against England 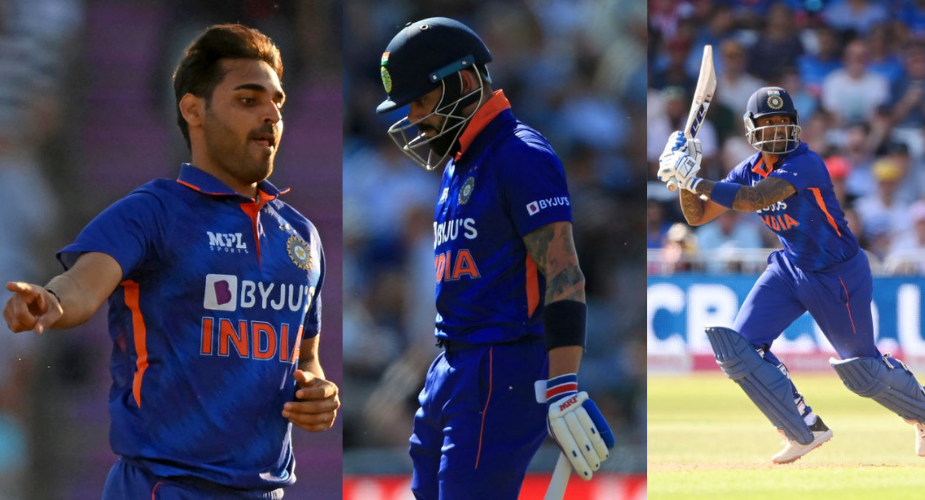 India were at their best in the opening couple of games, defeating England comfortably at Edgbaston and Southampton. They came up a cropper at Trent Bridge but had wrapped up the series by then. Here is a look at how India’s players fared during the series.

As has been the case in recent times, Rohit could not register a substantial score. But in the games that India won, he set the tone early and put the England bowlers under pressure. He was astute with his decision-making too and marshalled his troops superbly.

Pant thrilled on his way to 26 at Birmingham as an opener, illustrating that he could take up that gig on a more permanent basis. At Trent Bridge, he couldn’t get going. His glovework, though, was excellent throughout the series.

Kohli endured a wretched time against England. At Edgbaston, he was dismissed by Richard Gleeson while attempting an ugly swipe across the line. A game later, he looked in good touch but couldn’t make his start count. He also dropped a relatively easy catch at Trent Bridge, with the question marks over his place in India’s first-choice T20I XI only getting more prevalent.

If there was any doubt about Suryakumar’s ability in overseas conditions, this series dispelled it. He was simply irresistible at Trent Bridge, showcasing an entire repertoire of drool-worthy strokes. At Southampton, too, he attacked from the outset and was crucial as India posted 198. The only reason he doesn’t get a 10/10 rating is because he could manage only 15 at Edgbaston.

Pandya was superb in the two games that he played during this series. In the 1st T20I, he rescued India from a perilous situation with the bat before picking up four wickets. He didn’t quite have the desired impact at Edgbaston, although he provided India with a crucial fifth-bowling option.

Karthik came into the series with a lot of momentum, having distinguished himself during IPL 2022 and the T20I series against South Africa. Against England, though, he looked out of touch and only mustered 29 runs from three innings – that too at an uninspiring strike-rate of 93.54.

Jadeja showed off his class as one of India’s best finishers with a vintage unbeaten 46 at Edgbaston. He consolidated adroitly before teeing off towards the end, ensuring India posted a series-clinching total. However, he struggled at Trent Bridge with the ball and didn’t contribute much with the bat either.

Bhuvneshwar was at his dexterous best at Edgbaston and Southampton. He got the new ball to talk and accounted for Jos Buttler in both matches. The pacer also bowled with plenty of variety, with his in-swingers, out-swingers and clever changes of pace always keeping the batters on their toes.

Harshal wasn’t too bad but wasn’t outstanding either. He bowled through the middle overs and at the death, holding his own on occasions. His assortment of slower deliveries didn’t quite get as much purchase on relatively true pitches, although he must be commended for sticking to his strengths.

Bumrah played a solitary game in the series, although he did everything India could’ve asked for. He produced one of the best balls of the series to dismiss Liam Livingstone and showed that he remains attuned to the shortest format, despite not having played many T20Is in recent times.

Chahal did whatever was asked of him. He broke threatening partnerships in the middle overs and hoodwinked batters with his drift, guile and flight. Even on pitches that weren’t very conducive to spin-bowling, he found a way to stay ahead of the game. It seems incredible that he wasn’t a part of India’s plans at the 2021 T20 World Cup.

Kishan didn’t set Southampton ablaze in his only knock of the series. He looked scratchy against the extra bounce Reece Topley generated and ultimately fell to Moeen Ali. With Pant impressing as opener and KL Rahul expected to come back into the side, opportunities might be at a premium in the immediate future.

Axar had an indifferent outing at Southampton. He was promoted ahead of Dinesh Karthik and scored 17 off 12 balls. With the ball, he was very expensive, conceding 23 runs from two overs and returning wicketless.

Arshdeep played just the opening fixture at Southampton but illustrated that he could replicate his IPL success on the international stage. He swung the new ball both ways and was efficient at the death, finishing the series with two wickets at an average of nine. The pacer was unlucky to not have featured more against England.

Hooda carried over his stunning T20 form and produced a brisk 33-run cameo at Southampton. He was particularly severe on Moeen Ali and portrayed that he could deputize at No.3, if India decide to shuffle their pack for the T20 World Cup.

Avesh began his spell at Trent Bridge conceding only six runs in his first two overs. Thereafter, he leaked runs and was pummelled, especially at the death. A performance that reminded India of his talent but also showed that he remains slightly rough around the edges.

Umran came in for some punishment on a flat track at Trent Bridge. He picked up the wicket of Jason Roy but apart from that scalp, there was very little to celebrate. He was also not as brisk as he usually is and lacked a bit of rhythm.

Bishnoi was thrust into the deep end at Trent Bridge and he thrived. He conceded 29 runs in his first three overs but returned with a twin-wicket over, getting the better of Dawid Malan and Moeen Ali. Chahal might be the first-choice wrist-spinner in the side but if called upon, Bishnoi seems equipped enough to perform consistently.

On paper, Shreyas scored 28 runs and provided Suryakumar with some much-needed support at Trent Bridge. In truth, however, Shreyas struggled to impose himself while huffing and puffing against the short ball. He departed after chewing up 23 deliveries and was dismissed at a time when India dearly required an injection of impetus.