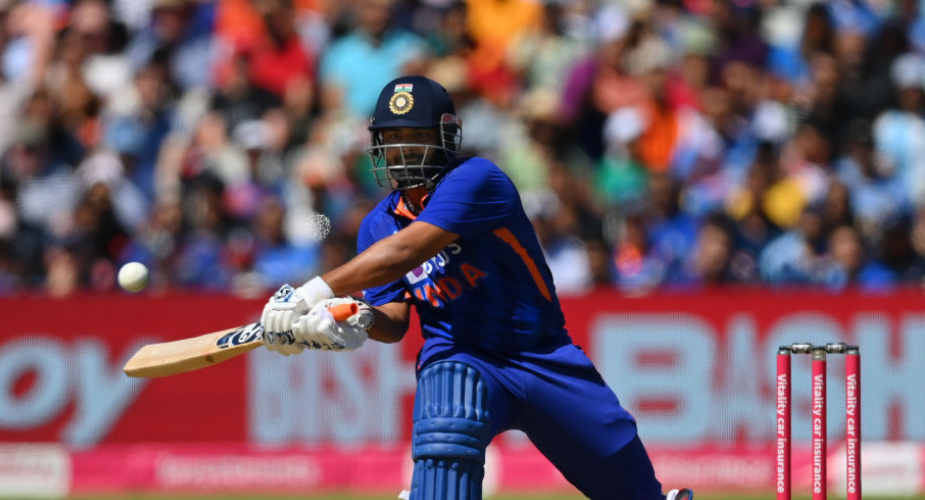 At Edgbaston, India sprung a surprise by promoting Rishabh Pant to open. But based on his current T20I career trajectory, it’s a move worth persisting with, writes Shashwat Kumar.

Expectations and Rishabh Pant have been synonymous with each other ever since he broke onto the scene as a precocious teenager. A fearless batter, Pant has long been touted as someone who could help India achieve peaks that might have earlier seemed insurmountable in white-ball cricket.

The wicketkeeper has spent much of his IPL and T20I career in the middle order. The past couple of IPL seasons have also seen him take over the reins at Delhi Capitals, meaning that he has had to shoulder additional responsibility and bat accordingly. He has still tried to impose his attacking philosophy whenever he batted, but because he has often walked into make-or-break situations in the middle order, effervescent cameos – like the ones he produced during IPL 2022 – weren’t deemed good enough.

The story hasn’t been too dissimilar with India. As things stand, Pant averages 23.24 and strikes at 125.12 in T20I cricket – numbers hardly befitting of someone of his ability. During the same period, though, he has thrived in Test cricket. Based on his skill-set, Test cricket should be the format he is least successful in. T20 cricket, on the other hand, seems crafted just for Pant, moulded for his brand of belligerence. So, what’s the catch?

There are several aspects involved and the debate will rage on and on. The key facet, however, is that Pant, as absurd as it might sound, has more freedom in Test cricket to bat the way he wants – freedom that he could gain if he is backed to open in T20I cricket.

In Test cricket, the wicketkeeper has evolved a mechanism of picking and choosing his moments to attack. In the fifth Test at Edgbaston, he didn’t try anything funky against James Anderson and Stuart Broad at the start of his innings. He then capitalized as soon as Jack Leach and Matthew Potts were introduced into the attack. When batting in the middle order of a T20 game, though, he feels the pinch to attack whoever comes on to bowl, thereby forcing him to play strokes that he might not be as comfortable with and reducing his percentages.

In red-ball cricket, the fields are also not as spread out, meaning that a few shanks and slashes clear the fielders comfortably. During the middle overs of a T20 match, however, men are usually posted on the fence and there is greater risk of Pant mistiming and getting holed out in the deep.

These elements came to the fore in the recently concluded series against South Africa. Keshav Maharaj, in particular, dangled the carrot well outside off stump and Pant fell into the trap more than once. Maharaj was probably confident of tossing the ball outside off stump because he had fielders posted on the fence. In the powerplay, teams and bowlers might not have that luxury.

Apart from the numbers, Pant adds plenty of value as an opener to the Indian batting unit. Rohit Sharma has been a nervous starter against spin in recent times. But if Pant is at the other end, teams will be reluctant to start with spinners. It might force them to hold back their spinners, which in turn, would be music to Deepak Hooda, Hardik Pandya and Suryakumar Yadav’s ears in the middle order.

Most tellingly, it gives Pant the opportunity to impact games more often and for a longer duration. At Edgbaston, he provided glimpses of what he could do at the top of the order. A 15-ball 26-run knock might not seem much, although it could be argued that his stroke-play allowed India to lose a cluster of wickets and still be in a position to get to 170.

This is also part of the new T20I philosophy India want to preach. They want to throw caution to the wind. Pant, from that perspective, seems an inspired choice at the top, considering the destruction he can cause at the outset and how quickly he can establish a position of ascendancy for India. And even if he fails, there is enough batting security to offset his early departure.

Prior to the series, the wicketkeeper had only opened four times in the IPL, having never done so in T20I cricket. Now, it seems that India are perhaps leaning towards pushing him up to open – a spot where he broke onto the scene as a precocious teenager.

For far too long, Pant has been a bird in a gilded T20I cage for India. Almost like a kite being controlled by the strings of conventionality, criticism, responsibility and scrutiny. Pant is a character who should be allowed to be himself, even if it means that he will go wandering injudiciously on the odd occasion. He is a free-spirited individual who thrives on freedom and dares to reach heights very few can dream about.

And the best bet in T20I cricket, at the moment, seems to be as an opener. It’s taken time. But if it can definitively unlock Rishabh Pant, the T20I beast, the wait will have been worth every single moment.