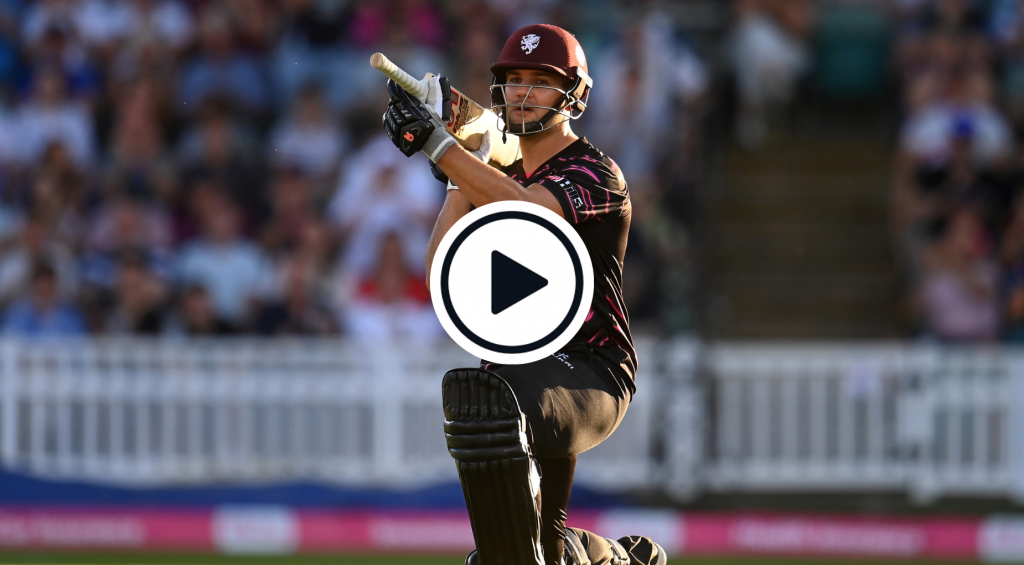 Watch: Rilee Rossouw smacked an astonishing 93 off 36 balls in Somerset’s record-breaking 191-run win against Derbyshire in the T20 Blast quarter-finals.

Rossouw’s innings included eight fours and seven sixes, five of which came in a single over from the legspinner Mattie McKiernan, whose figures of 4-0-82-0 were the most expensive in T20 history.

McKiernan had bowled three overs for 46 runs going into his last set of six with Roussouw on strike. The South African, at this stage on 53 off 26, targeted the legside boundary and struck the first two balls for six and the third for a one bounce four.

From the fourth ball of the over, the ball slipped from McKieranan’s grip and missed the cut strip, resulting in a no-ball and the over having gone for 18 off three legal deliveries.

Rossouw then struck the final three deliveries all for six into the legside to take his score to 87 off 33 balls and leave McKiernan nursing the unwanted record of the most expensive spell of bowling in the history of T20s.

The South-African Rossouw has had a phenomenal season for Somerset this year, this being the seventh time he has passed fifty in the campaign. His tally of 600 runs is the most a Somerset player has scored in the history of the competition and sees him second to only Hampshire’s James Vince in this year’s leading run scorers. Rossouw has also scored his runs at an incredible strike-rate of 197.36.

Somerset’s 191-run victory was also the largest margin of victory in the history of T20 cricket and saw the West Country side through to a consecutive finals day appearance after finishing as runners-up last season.

Rilee Rossouw scoring 3️⃣4️⃣ runs from an over #Blast22 pic.twitter.com/3TY0uGnj58