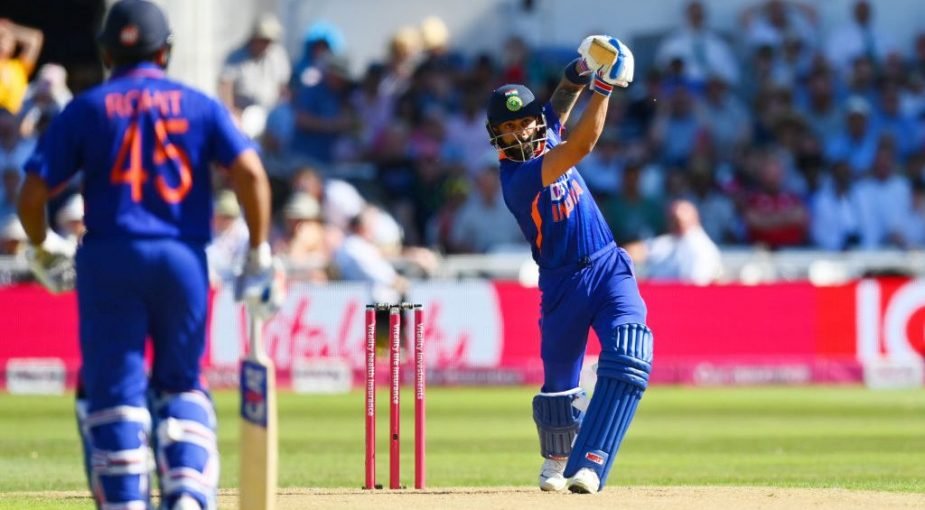 Virat Kohli might be going through the lowest phase of his career, but he’s still a vital part of India’s T2oI setup, especially with a World Cup looming, writes Aadya Sharma.

Virat Kohli must be a tired man. Not tired like at the end of a long day, but mentally jaded. It’s been a hard couple of years. It will take a lot of holidaying in the Maldives to get rid of that amount of fatigue. It’s mental, more than physical, even though the latter is an undermined topic; Kohli has played more international matches, across formats, than any other player since the start of 2020. We’re not even counting the IPL.

There’s no denying that Kohli’s numbers have fallen off a cliff. This is, in part, because the peak itself was higher than most would have even dared to set their sights on. The pandemic might make us think otherwise, but it wasn’t too long ago that Kohli was the ICC’s Player of the Decade, an award won because of an astonishingly long period of domination. Only two other players have mustered 3,000 or more runs in T20Is. He’s the only one among the top 30 run-getters to average over 50 in the format. Add that to his sustained excellence in Tests, and resounding domination in ODIs, and you had arguably the greatest all-format run-maker of this generation.

Run droughts aren’t a new concept in the sport. The greatest have suffered bouts of poor form. The mightiest have fallen into a seemingly bottomless abyss of low returns. With Kohli, the bar was set extremely high: a fall from those lofty standards was always going to be pounced on by detractors.

Despite what seems to be slowly becoming a popular opinion though, Kohli can still be an integral part of India’s T20I setup. The T20 World Cup is just about three months away, a competition where Kohli’s been Player of the Tournament in two separate editions. He’s hit ten fifty-plus scores – the most by anyone – and averages a jaw-dropping 76.81 across four competitions. On pure reputation and track record, it’s almost unthinkable to suggest that you’d not want such a player on your side.

Reputation alone can’t warrant a place though, and that’s where Kohli’s current form seemingly jams the entire discussion. Once the undisputed champion, he now sits 25th on the ICC’s T20I batting charts, with five India batters ahead of him. The last two editions of IPL, often the barometer of selection, have seen a distinct dive in fortunes – he’s averaged below 30 and struck under 120 both times. This year’s T20I numbers also aren’t striking: in four innings, he averages 20.25.

However, even in the seemingly lowest of lows, Kohli had a statistically healthy 2021, T20I-wise. In ten games, he fetched the second-most runs for India, averaging 74.75 with four fifties, two of which came at a strike rate north of 150, and one in the all-important India-Pakistan game at the T20 World Cup.

It’s also important to understand where Kohli’s role fits in India’s bigger plan. The recent England series was a clear indication that the side has decided to adopt an all-out-attack approach in the shortest format, quickly getting off the blocks and maintaining a high scoring rate. In the refurbished outlook, Kohli might have a bigger role to play: in the past, India have been guilty of having multiple anchors and too few enforcers, but now, even Rohit Sharma, usually a gradual starter, seems to be joining the come-out-smashing approach. In this scenario, Kohli could be the stable run-collector at No.3, giving enough cushion to Rohit and his opening partner to continue the refreshing outlook. After him, Suryakumar Yadav rarely needs time to get going, and the presence of the Pandyas and Karthiks further down ensures that there’s no dearth of firepower to finish with a bang.

The lack of attacking options hasn’t been an issue for India, but it’s been how they adjust their order and stack their batters. In knockout tournaments, India’s top order has lost its way at crucial moments, leaving the middle order with a tall mountain to climb. In ODIs, it happened during the Champions Trophy final in 2017, and the 2019 World Cup semi-final, and it nearly happened in the 2021 T20 World Cup fixture against Pakistan, where Kohli stood tall amid the ruins, scoring 57 when three of the top five couldn’t cross 11.

It’s that ability to soak in pressure where Kohli is an unmatched asset: he’s been riding the storm for over a decade, and is a master at accelerating at the right time, pushing through tricky periods before landing a telling counter-punch. Add to that his exceptional record in Australia, the venue for the T20 World Cup – in 11 matches, he averages 64.42 there, with five fifties and a strike rate of 144.55. Since his debut, all other India batters have hit six fifties combined. It’s also where the lack of experience of the younger options could be tested – neither Suryakumar Yadav nor Deepak Hooda have played a T20I in Australia, and Shreyas Iyer has only appeared twice.

And while it’s difficult to disregard some of the recent performances of the three names mentioned, it’s also difficult to imagine that you’d want to take the punt of leaving out one of the most prolific run-getters of all time. The return to glory could come on the biggest of occasions. A T20 World Cup swansong could galvanise Kohli to put on his best foot forward, get back into the zone, and return to his run-churning avatar.

It takes us back to the first part of the conversation: Kohli’s absence from the West Indies series could actually work out well for him. Having played through an under-par patch of form across a rigorous calendar, he could benefit well from a few weeks off – as many have said – recalibrating his mindspace for the challenging period ahead. There’s still the Asia Cup to go, and the Australia T20Is that follow, enough time for him to click back into action. It’s going to be quite something if the revival comes at the World Cup, a tournament that turned his career around in 2014. As far as cricketing stories go, it would make for a fine read.

Watch: Virat Kohli Fishes Outside Off And Edges David Willey Behind To Extend Century Drought