‘Mate! You’re A Genius’ – How A Retired Wasim Akram Outfoxed Jacques Kallis With A Four-Ball Trap In IPL Nets 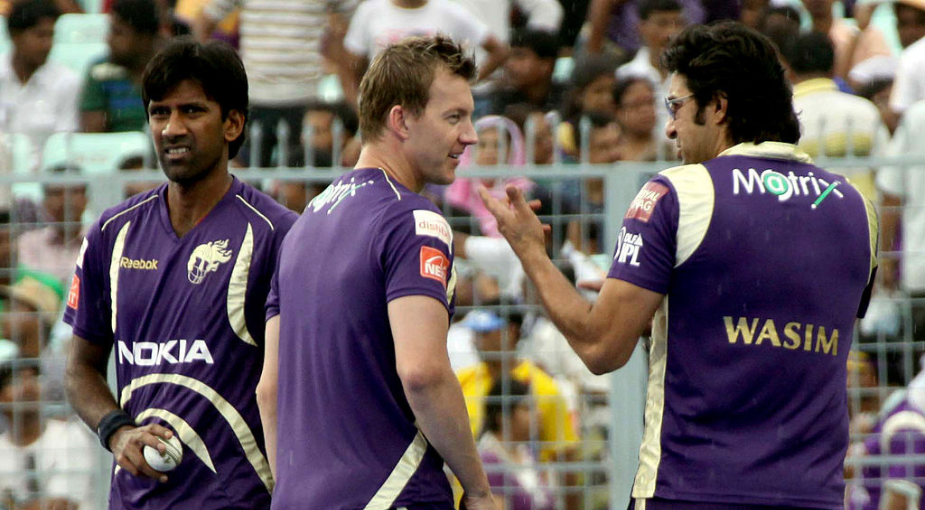 Brett Lee has added to the already rich legacy of Wasim Akram by narrating an incident from their time together at Kolkata Knight Riders, recalling how the Pakistan great once plotted the dismissal of Jacques Kallis in the nets and executed his plan to perfection.

Having retired from all cricket in 2003, Akram served as the bowling coach of KKR from 2010 to 2016, a period in which the franchise clinched two trophies. Lee, who was a part of the side from 2011 to 2013, has described an incident that further proved Akram’s genius, reliving how the latter dismissed Kallis, part of the KKR team, in just four deliveries, even as the other bowlers struggled to get a ball past the South Africa player.

Speaking on his Youtube channel Brett Lee TV, the Australia pacer first narrated his struggles against Kallis, despite getting coaching tips from Akram. “There was one moment that really, I guess, justified the raw talent and the purity of Waz (Akram). And it was when we were training with KKR. So I’ve got arguably the greatest cricketer in the world, Jacques Kallis playing for KKR down there and batting, and we’re trying to ball in a centre wicket. And I told my bowling coach – just happened to be Wasim Akram behind me – Waz, what would you do to Jacques Kallis, arguably one of the best cricketers, ever to play the game?”

He then went on to reveal how Akram decided to roll his arm over in a bid to dismiss Kallis and that his plan would be to get four deliveries back into the batter before taking the fifth ball away. Lee, surprised at the simplicity of Akram’s approach, goes on to narrate how the former Pakistan captain executed his idea to perfection, and how he needed only four balls to get Kallis’ wicket.

“He had sand shoes on, no spikes, warms his shoulder up. I said, “what are you gonna do?” He goes, “I’ll bring four back in, I’ll take one away”. I’m like, “What? That simple?” So sure enough, he comes in, swings the ball in, Jacques Kallis played it straight back, respect to Wasim bhai.”

“Did that [Akram turned the ball over], the same position, took one away to straighten. Nick, and caught behind. I said, “Mate! You are a genius. We’ve tried all day to get Jacques Kallis out, you get him out with a fourth ball exactly as planned with no spikes on, uneven rubbers.” And that just sums up the reason why I believe Waz was such a great bowler because he had it upstairs. You don’t often find a bowler that is a great captain and is also a great leader. Well, he had all three. And that’s the reason why I loved watching Wasim Akram, and certainly was very lucky to play in a team with him as my bowling coach.”