Dinesh Karthik Hailed Hardik Pandya With A Special Tweet: Hardik Pandya’s performances in the recently-concluded England tour were the best way to highlight what has been a terrific comeback to the national team, following a successful IPL campaign.

After impressive shows against South Africa and Ireland last month, Hardik came into his own in England. First, his solo performance in the Southampton T20I – 51 runs and 4 wickets – and then in the series-deciding third ODI – 71 runs and 4/24 – stamped his status as not only India’s best seam-bowling all-rounder but as one of the best in the world!

Hardik Pandya gets the big wicket of Jason Roy

This is the view of Hardik’s close friend and veteran Indian cricketer Dinesh Karthik, who gushed about the all-rounder as amongst the finest in the world following Hardik’s match-winning show in Manchester.

Pandya scored 71 runs off 55 balls in a match-turning stand with Rishabh Pant that yielded 133 runs off 115 balls after India had been tottering at 72/4 in a chase of 260. Pandya took the bowlers head on and smashed 10 fours in his enterprising innings. Pant played the second fiddle role in his partnership with Pandya and after the latter’s dismissal, the left-hander teed off, cracking his last 48 runs off only 25 balls, bringing up his maiden ODI ton. 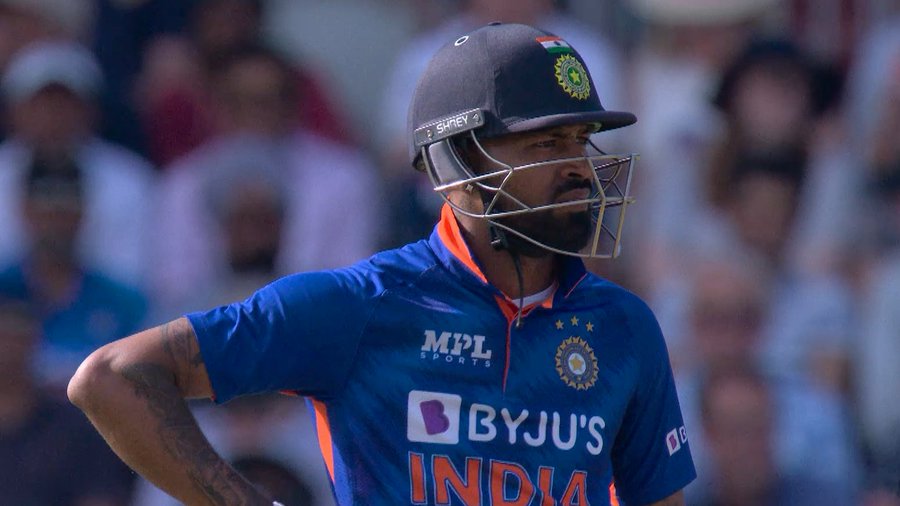 With the ball earlier, Pandya had bagged a four-wicket haul – comprising wickets of Jason Roy, Ben Stokes, Liam Livingstone and Jos Buttler to restrict England to a below-par total. Pandya eventually was awarded the Player of the Series award for scoring 100 runs at a strike rate of 101 and taking 6 wickets at an economy of 4.35.

Dinesh Karthik, a member of India’s T20I side, took to Twitter to commend Pandya as one of the best all-rounders in the world and also praise Pant for his outstanding knock.

“Quality knock @RishabhPant17. In a series decider when it matters most. @hardikpandya7 you are one of the best allrounders in the world right now . Period Great work guys. Well done team india[sic],” Dinesh Karthik tweeted.

Quality knock @RishabhPant17 . In a series decider when it matters most @hardikpandya7 you are one of the best allrounders in the world right now . Period

Hardik Pandya Made A Heart-Winning Statement For Captain Rohit Sharma