Comeback man Dinesh Karthik reflected on his thoughts of resurging his India career when he was recalled last month for the South Africa T20I series after a stellar IPL 2022 campaign for the Royal Challengers Bangalore where he was quite easily their best and most consistent batsman throughout the season.

Karthik was dropped in 2019 from the Indian team as the selectors and management looked toward younger players. But the Tamil Nadu batsman, now 37, worked on a niche role of a finisher and put on spectacular batting performances during the IPL.

Dinesh Karthik made a comeback to Indian team aged 37

Karthik asserted that making a comeback to the national team once you cross the age of 35 is as difficult as a comeback can be.

“Making a comeback when you are 35-plus was never going to be easy. I am thankful to everyone who helped me during that phase. I quietly believed in myself and did the hard yards before the IPL, and I am happy things worked well,” Karthik said speaking at a launch event in Chennai.

Karthik was in surreal touch for RCB, smashing 330 runs at a strike rate of 183.33 and was the unarguably the best finisher this season. He credited his IPL performance to give his confidence a major boost.

“The fact that I did so well for RCB has helped me achieve a few important things. It is a journey and I am really enjoying it. With every new day, there is a different challenge. Some challenges you overcome, and some challenges are harder so it has been interesting so far,” he added. 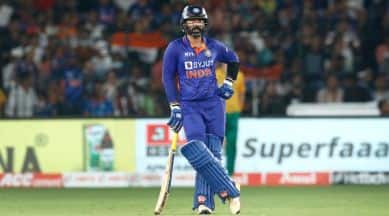 On his return to the Indian team, Karthik was pivotal in India drawing the series against South Africa as he notched up his maiden T20I fifty and finished the series with 92 runs at a strike rate of 158, but didn’t quite do much in the England series.

Karthik, who is likely to be on the plane to Australia for the T20 World Cup, said that the role clarity of being a finisher – where his entry point was delayed by both RCB and India – has helped him a lot.

“Be it for the state (Tamil Nadu), IPL or national side — if your role is defined clearly it becomes relatively easier to prepare and focus. One has to adapt and thrive, and I am really enjoying the challenge,” Karthik explained.

His next assignment is the upcoming 5-T20I series in West Indies and USA.