It is perhaps fitting that as Hardik Pandya is ascending as a proper all-rounder in limited-overs cricket by making a match-winning impact with the ball, he has, on his rise now, registered his best ODI bowling figures – 4/24 in 7 overs – when he dismissed four English batsmen on Sunday at Old Trafford.

And these four names are amongst the most destructive batters in the world: Jason Roy, Ben Stokes, Liam Livingstone and Jos Buttler.

Pandya had earlier, the Southampton T20I, taken a four-wicket haul showcasing his excellent control and path to mastery of length; with the same modus operandi, he downed England today. 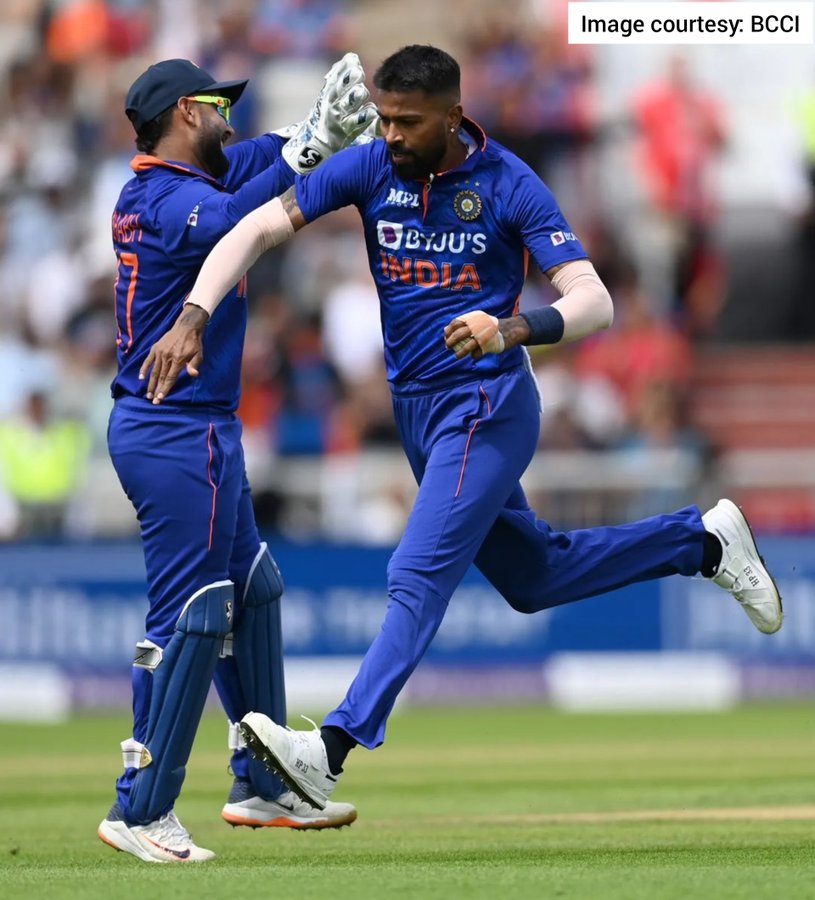 Hardik Pandya changed the game for India with the ball

Length, Short of length and bouncer is what got Pandya all of his four wickets as each batsman tried to pull him and failed with their connection.

His first spell brought India two wickets – Roy and Stokes, both top-edging and mistiming their pulls – as he bowled two maidens as well; his first spell read: 4-3-2-2.

Explaining his plans after England’s innings, Hardik Pandya said: “I had to bend my back a bit. I had to change my plans – realised that this was not the wicket to go full – and go for the short-ball, use it as a wicket-taking delivery. I fancy my bouncers. In ODIs you have to take on the short ball and that gives a chance to take wickets.

There was an ego battler with Pandya and Livingstone. Despite Livingstone hitting Hardik for a couple of sixes on his short ball, the seamer persisted with his plans and eventually hard Livingstone – and then Buttler, too – caught at deep square leg by Ravindra Jadeja.

“Livingstone likes to take on the short ball and that gives me goosebumps, he hit me for two sixes but I told my captain even if I go for four sixes here, if I take a wicket, it will make a difference,” he said.

Netizens hailed Hardik Pandya for his sensational bowling comeback having struggled with back injuries over the past three years.

Here are some of the best reactions to Hardik Pandya’s four-fer in the third ODI:

Hardik Pandya was pick of the bowlers with figures of 4/24 in 7 overs.

Hardik Pandya 6-3-18-4. Career best bowling spell by Hardik, what a form he’s been in since his return.

Taking 4+ wicket hauls against an opposition at their own home in Test, ODI and T20I:

Hardik Pandya has taken 4 or more wkts in an innings in all 3 formats in England.
Only one English player has achieved this feat, he is Chris Jordan. #ENGvIND

Repeating it again Prime Hardik Pandya is completely unmatchable.! One of the best all rounder in white ball in recent times.!

Hardik Pandya said “Rohit Sharma has handled me nicely – he has been fantastic as a captain”.

Hardik Pandya with the ball till now:

Hardik Pandya since the IPL has his GOD mode on. 🥵

Hardik Pandya said ” Skipper Rohit Sharma has been brilliant on when I should bowl and when I should not, he has handled me greatly “. pic.twitter.com/FIhQbE8Lth

Also Read: Mohammed Siraj Made A Powerful Comeback As He Dismissed Root, Bairstow For Ducks In 1st Over