“Controlled and not reckless.” These words from commentator Harsha Bhogle defined the innings of Rishabh Pant as he steered India home in the third ODI against England, at Old Trafford, in what was made a tricky run-chase after the top three failed again.

Rishabh Pant’s maiden ODI century, brought up in his 24th ODI innings and after 5 fifties and after a highly-backed promotion to number 4 from the Dravid-Sharma management, helped India claim the ODI series 2-1 in England.

It was fitting that he brought up his century via a pull toward deep square leg for he has played the pull shot with immaculate control and enviable effectiveness today. 46 of his 125 runs came between the square leg and mid-wicket region. He also took a toll on other parts of the ground. 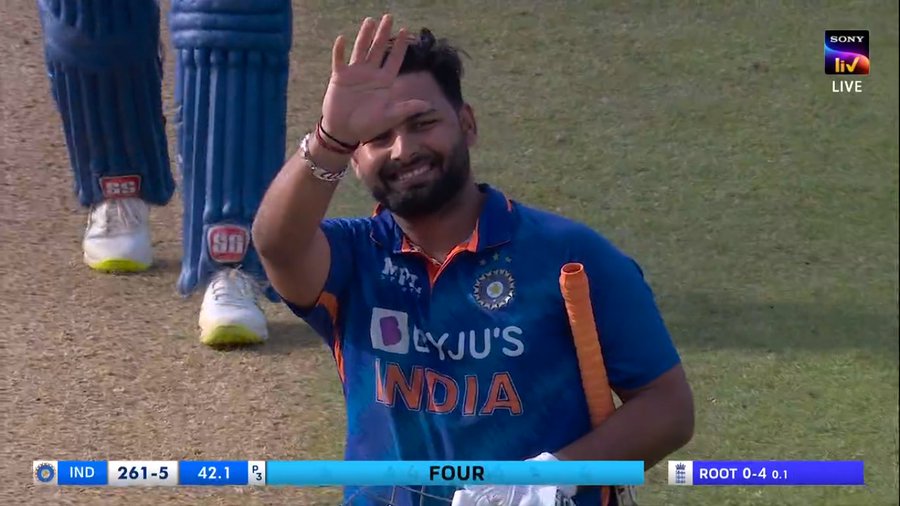 Given a target of 259, India once again, like in the previous match, found themselves in a worrisome position, at 38/3 which then turned into 72/4.

However, unlike the previous game, they found two heroes. One who is building his reputation, Hardik Pandya, and the other, Rishabh Pant, who is now making his numbers better in international white-ball cricket – that would alleviate some fans’ concern.

Pant and Pandya shared a mammoth partnership of 133 runs off 115 balls, wherein they played entertaining cricket – playing their shots, but not being reckless about it, but rather being calculated. In fact, Pant even decided to slow down as Pandya attacked the bowlers.

Pandya got out scoring 71 runs off 55 balls. And England must have sensed a way back. But Pant didn’t let his happen.

After Pandya’s dismissal, Pant reined into the England bowling, smashing 48 runs off 25 balls in a 56* runs stand with Ravindra Jadeja, and killed off the game soon, walloping 5 boundaries at the end to David Willey to assert his authority.

Twitter went ablaze as Rishabh Pant has finally stepped up in limited-overs cricket for India, a mission fulfilled for Rahul Dravid.

Here are some of the reactions by fans on Twitter on Pant’s fantastic maiden ODI ton:

This will be a familiar sight from now on. He is going to finish many games in the next 10 years.

Rishabh Pant show, what a player.

Rishabh Pant – you are a hero 🫰 pic.twitter.com/N9TUJBVYLm

Quality knock @RishabhPant17 . In a series decider when it matters most @hardikpandya7 you are one of the best allrounders in the world right now . Period

Hundred by Rishabh Pant – what a knock this has been by Pant. In the series decider, he’s put on a masterclass and gave his best for India.

For all the Doubting Thomases, Rishabh Pant will be India’s biggest match winner in the years to come. This 100 also kinds of affirms the passing on of the baton @RishabhPant17
PS: Look out also for a hungry @hardikpandya7 #INDvENG #Pant #Hardik

This is one of the best ODI under pressure on the English soil from an Indian batter, Considering series was on the line @RishabhPant17

Indians with an ODI century in the last two years.

Pant really paced his innings quite well today. Reached his fifty in 71 balls, and then changed gears to add his next fifty in 35 balls.

Hopefully, today’s innings, allows him to understand how to set up a tempo in ODIs.

All five of Rishabh Pant’s Test centuries have come in the last game of the series, and now his maiden ODI ton has as well. Clutch#ENGvIND

Watching Pant bat here may make you nervous because he is one of the last two capable batters at the crease, but that’s understandable given India have lost 5 wickets.

What’s not is that it used to feel the same way with Tendulkar in his early to mid-20s from Ball No.1.

Rishabh Pant has not only won yet another match from a tricky situation, but has laid the template for himself for constructing the perfect ODI innings #INDvsENG

Why Rishabh Pant they asked…