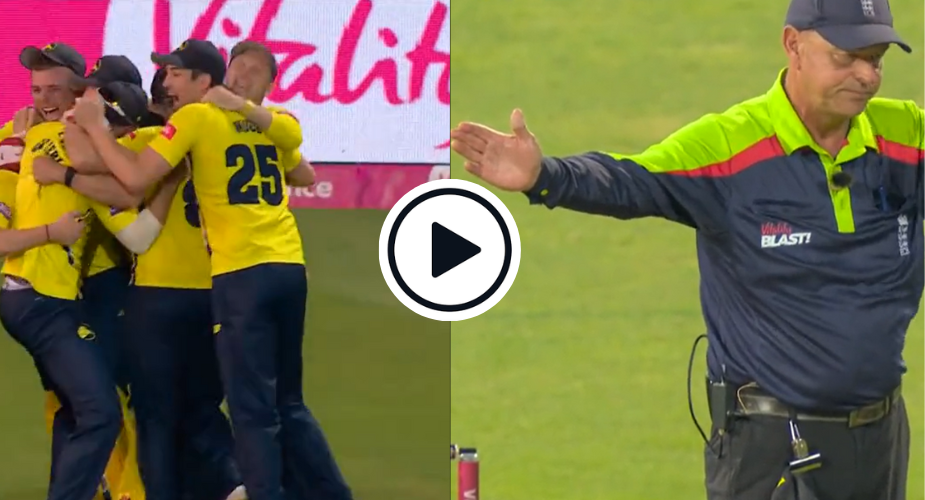 Watch: the final of the T20 Blast took an unexpected turn when Hampshire’s celebrations were cut short by a no-ball call on the final ball of the game.

The summit clash had rattled along to an exciting conclusion, with Lancashire requiring five runs off the final ball. Richard Gleeson was on strike to Nathan Ellis and it seemed the game had ended when the Australian snuck through Gleeson’s defences. Hampshire, thinking that they had won the competition, wheeled away in celebration only for the third umpire to intervene and call a front-foot no-ball. It was a dramatic end to a match that had ebbed and flowed throughout.

With the equation reduced to three runs required off the final ball, Ellis held his nerve, delivering a deceptive slower ball. Gleeson played a massive swipe across the line but only connected with fresh air. He then tried to scamper across for a couple of byes. However, he was unable to do so, with the umpire ruling that the ball had gone dead after the first bye was completed.

Had Lancashire been able to complete the second run, they would have been crowned champions as a result of scoring more runs in the powerplay after both sides lost eight wickets across the match. Either way, this game was filled with mind-boggling entertainment until the very end, with Hampshire having to close out the game not once, but twice.

The utter, utter drama of #Blast22.