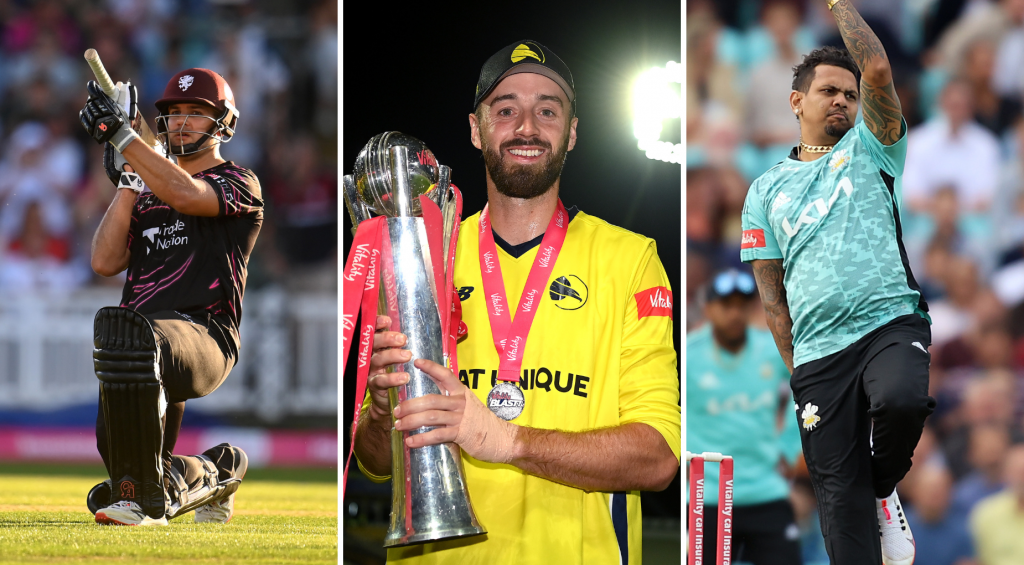 The T20 Blast came to an end after almost two months of dramatic action with Hampshire beating Somerset by just one run in a controversial final. Below is our team of the tournament.

The captain of the eventual title winners and also the leading run-scorer in the competition. A dream season for Vince who hit two centuries during the group stage, including a career best 129 not out off 62 balls against Somerset. His direct hit run out in the final with Lancashire needing 11 off seven balls will also live long in the memory.

An all Hampshire affair at the top of the order. McDermott was the stand out wicketkeeper of the competition, passing fifty on five occasions including a player-of-the-match 62 off 36 in the final against Lancashire.

Lynnsanity arrived in the Blast with Chris Lynn thumping bowlers all around the country. Lynn and Vince were the only two players to hit multiple centuries in the competition.

One of the all-time great T20 Blast campaigns from Rossouw, who passed fifty on seven occasions and scored over 600 runs, both of which are Somerset records. Most remarkably, his strike-rate for the competition was a staggering 192.28. A figure only rivalled by Nottinghamshire’s Alex Hales, whose 374 runs came at a strike-rate of 193.74 and very nearly earned him a spot in this side.

Hose was part of a record breaking Bears side who passed 200 on seven occasions throughout the group stage and even set a domestic record score of 261-2 against Nottinghamshire at Trent Bridge (a score that was later beaten by Somerset). Hose was an integral part of a middle-order that supercharged their batting line-up and he finished the competition as the third leading run-scorer.

A strike-rate of 174.56 is the deciding factor in David’s selection. The ability to clear the ropes in the middle overs is vital in T20 cricket and David also balances the side in being able to offer some spin as well.

Narine was one of only three bowlers to have a tournament economy below a run-a-ball, with the other two players being Harrison Ward from Sussex and Sol Budinger from Nottinghamshire. The difference, however, is where Ward bowled one over in the competition and Budinger bowled four, Narine bowled 52.

A fantastic tournament with both bat and ball for Fuller who was Hampshire’s leading wicket-taker and fourth leading run-scorer. He rounded off a fine tournament with a fantastic spell in the final taking 2-19 off three overs.

The Blast’s cult hero makes it into yet another team of the tournament. While he only took 11 wickets in the competition he boasts an impressive economy rate of just 6.93 with the ball and a strike-rate of 179.31 with the bat further proved his case to be one of the best domestic T20 players in the country.

The standout death bowler of the competition, Ellis confirmed that reputation as he defended 11 off the final over to win the title for Hampshire against Lancashire.

The leading wicket-taker in the competition, Gleeson’s performances earned him an England call-up where he burst onto the scene with a magical debut spell. Gleeson just edges out Naveen-ul-Haq who could arguably take the place of any one of Gleeson, Ellis or Howell with 24 wickets at 16.16.