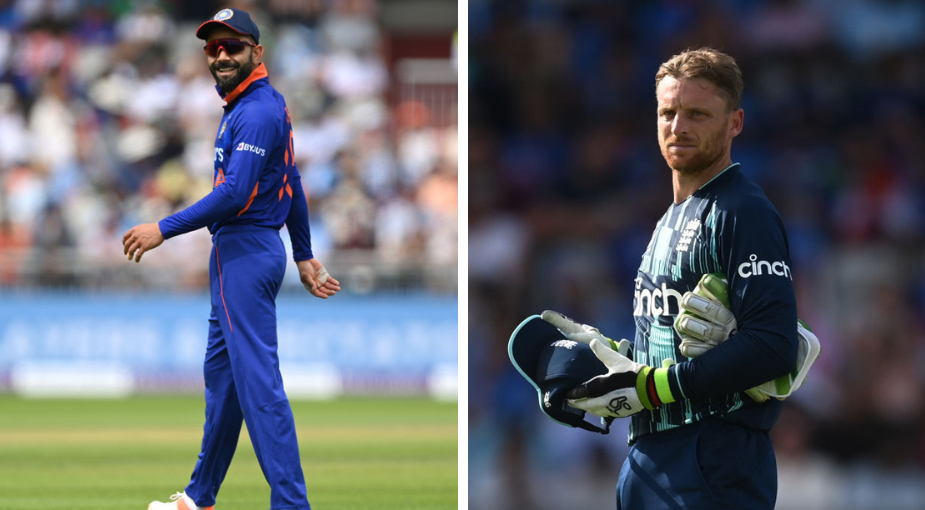 India registered only their third ODI series win in England, defeating the hosts by five wickets in Manchester on Sunday. Here is a team of the three-match series, featuring four England players.

The India captain played a match-winning knock of 76* off just 58 balls in the first ODI, helping his side easily chase down the target of 111. His innings was laced with seven fours and five sixes, ending at a strike rate of 131.03. However, he could not get going thereafter, making a duck and 17 in the next two games.

Roy started the series with a duck but found some sort of rhythm by the time the series ended. After making 23 in 33 in the second game, he struck a 31-ball 41 at Manchester, hitting seven fours after his partner Jonny Bairstow had departed for a duck.

Kohli’s inclusion might be a big surprise to many, but considering that his opposite number Joe Root averaged 3.66 in the series, the former India captain just edges ahead. He teased with a few scintillating strokes, almost giving hope that the dry run was behind him, but couldn’t manage more than 17 in two games.

Pant’s hundred in the third ODI could be the turning point of his white-ball career. Walking in to bat at 21-2, the wicketkeeper started off cautiously, getting to his fifty in 71 balls before upping the ante and making his next 75 runs in 42 deliveries. His maiden ODI hundred displayed Pant’s maturity and his temperament – if any was needed – as he took India from a precarious position to an easy win.

The England captain was the sole bright spot in the batting department for England in the third ODI. Walking in to bat after the side had been reduced to 66-3, Buttler went on to score a fine 60, taking 80 deliveries in the process. No other player could score more than 41 runs in the innings.

Pandya remained the only India player to score a fifty and bag four wickets in a single game in all three formats. The all-rounder was India’s second-highest run-scorer in the series and also the second-highest wicket-taker amongst quicks from the side.

The third ODI was as perfect a game as it could get for the IPL-winning skipper. After bagging four wickets with the ball, including dismissing big guns Ben Stokes, Jos Buttler and Liam Livingstone, he struck a crucial 71 alongside Pant to take India closer to a win.

England’s highest run-scorer in the series, Moeen played crucial cameos in all three games. In the first ODI, he was one of four England batters to reach double digits, and then top-scored in the next ODI, playing 64 balls for a steady 47. He offered resistance in the last game as well – scoring 34 – which included two fours and two sixes.

The first ODI was all about Jasprit Bumrah’s brilliance, but Shami was the ideal new-ball partner, troubling batters upfront with his swing bowling, getting the ball to move off the seam. He bowled 24 overs in the course of three games, the most by any bowler from either side and chipped in with a useful 23 from down the order in the second ODI.

The quick was at his lethal best in the first ODI, running through the top order in an extraordinary spell of swing bowling. He played only two games, ending with the best average amongst all bowlers in the series, and a strike rate of 13.

Topley was one of the biggest positives for England in the series. He constantly troubled the India top-order and dismissed both the openers in the last two games. His six-wicket haul in the second ODI set up England’s win after they had set India a target of only 247.

No other spinner from either team could pick up more than a wicket in the series, which is testimony to the rapid strides Chahal has made in white-ball cricket. Even in conditions that did not have much assistance, he troubled the batters with his variations and is now arguably India’s number one spinner in limited-overs cricket.