Returning to the County Championship after being away for a while to play the Edgbaston Test at the start of this month, there hasn’t been any change in the run-scoring spree of Cheteshwar Pujara who slammed a double hundred at Lord’s this week.

Given the responsibility of being the stand-in skipper for Sussex in the CC Division 2 game against Middlesex, Pujara recorded his fifth century of the season and converted it into his third double ton; he also has a score of 170* against Middlesex.

Standing at the crease for a marathon time of 533 minutes, Pujara finished with 231 runs from 403 balls, in the process stroking 21 fours and 3 sixes. Batting at number 4, he came in the 35th over of Sussex’s innings and was the last man to be dismissed, in the 163rd over!! Pujara and Tom Alsop’s hundreds helped Sussex put up a massive total of 523. 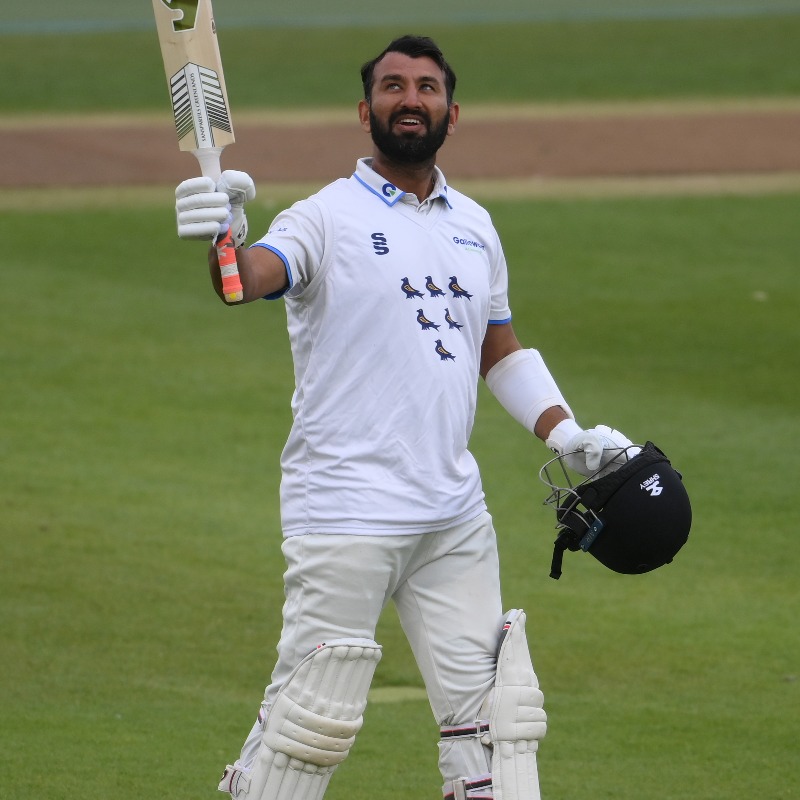 Pujara now is the third-highest run-scorer of the CC Division 2, 2022, season having amassed 997 runs in only 10 innings at a jaw-dropping average of 124.

It was Pujara’s splendid form in the County Championship before the Edgbaston Test between India and England that had got him a call-up to the Indian squad. And then after both Rohit Sharma and KL Rahul were ruled out of the game, due to covid and groin injury respectively, that Pujara got the chance to open.

While he fell for only 14 in the first innings, he scored a crucial 66 in the second innings and was India’s top scorer in the second innings. However, that all went in vain as England chased down 378 to win the game. Despite the loss, Pujara’s big contribution and this surreal form in County cricket are likely to keep him in India’s squad for the home Test series against Australia.

Fans were in awe but not totally surprised by Cheteshwar Pujara’s hunger for scoring big runs.

Here are some of the tweets marvelling at Pujara’s stunning County form:

Incredible for a modern player to be so high up this list.

Cheteshwar Pujara scored 231 in 403 balls for Sussex. Yet another dominating display by Pujara in the County Championship, it was his 3rd double hundred this season out of the 7 games. pic.twitter.com/CulkCQ7Wfy

His recent matches before this one: pic.twitter.com/LJdiHojjkU

Pujara doing what he does best, scoring runs. @cheteshwar1 pic.twitter.com/NiKOkV6dct

Cheteshwar Pujara scored his 16th double century in First Class cricket today, which is the most by an Asian player and the most among all active cricketers.

Here’s a special thread showing a breakdown of all of @cheteshwar1’s 16 double centuries in FC cricket :-

A complete list of players with three or more first-class 200s for @SussexCCC in the same season:

Indians to score centuries at Lord’s in County Championship :-