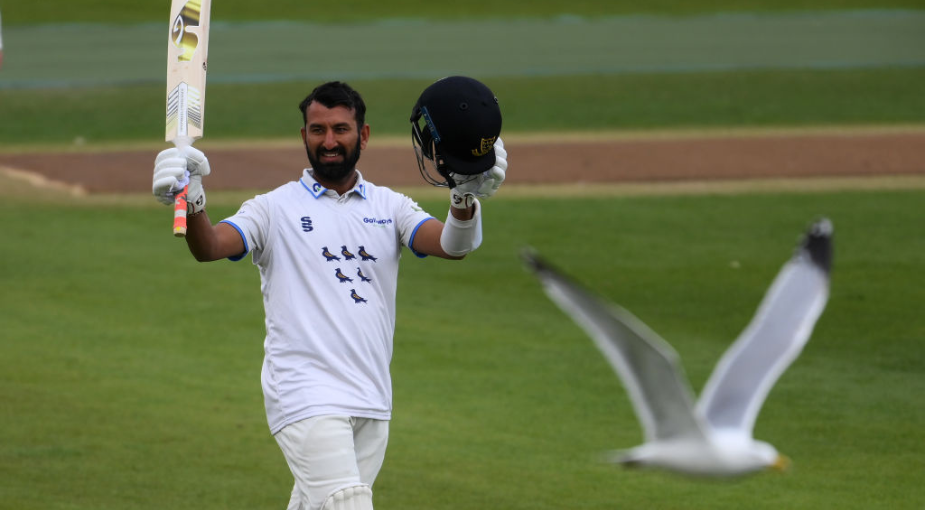 Here’s a look at how the four India players fared in the most recent round of the 2022 County Championship.

Cheteshwar Pujara, Umesh Yadav, Washington Sundar and Navdeep Saini were the four players to turn out for different county sides, the last two making their respective debuts in the tournament.

Making his county captaincy debut in the encounter after regular skipper Tom Haines was injured, Pujara continued his stellar run in the competition. Prior to the match, India’s Test No.3 had scored 6, 201*, 109, 12, 203, 16, 170*, 3 and 46, and carried on at Lord’s, making his 16th first-class double ton. He now has the fifth-most double centuries in the history of the game, on par with Charles Fry, Jack Hobbs and Graeme Hick.

Pujara is now the fourth-highest run-scorer in Division Two in this year’s County Championship, making 999 runs at an average of 111 with five hundreds. No other batter, with a minimum of 300 runs, averages more and no one has made more hundreds than him.

Sundar picked up a wicket with just the second ball of his county career, forcing Will Young to nick a half-volley. The Tamil Nadu all-rounder last played a first-class game in July last year and was affected by a hand injury in the 2022 IPL, but made a remarkable return, taking a five-wicket haul in his first innings on comeback. Besides dismissing Young, he also got the wicket of well-set Rob Keogh (54 off 82) and proceeded to dismiss Ryan Rickleton along with Tom Taylor before getting Lewis McManus for 61 to complete a five-for.

He also starred with the bat in the second innings, scoring 34* in 81 balls to see Lancashire home in a low-scoring contest.

The right-arm quick, who last played a Test for India in the Australia series in 2020/21, ran through the Warwickshire batting line-up on his county debut. Bowling first-change, Saini bowled probing lines, forcing the batters into false shots as four of his five wickets were picked up by the keeper Sam Billings. He returned to grab two wickets to help his team register a 177-run win  and boost their survival hopes.

Umesh was the only India player who did not have a memorable outing in the recent round of county games. Though he conceded only 2.41 runs per over in the first innings, it did not result in wickets. He took the new ball in the second innings and took out opener Tom Clark but could not get another scalp thereafter, even as Middlesex pushed for victory. It was Umesh’s second county game, having made his debut against Worcestershire earlier this month. He ended that game with a match-haul of two wickets.