Interim India skipper and opener Shikhar Dhawan missed out on what would have been his 18th ODI century – and the first since June 2019 – by only 3 runs when he was dismissed for 97 runs in the first ODI vs West Indies, on Friday, in Port Of Spain.

This entertaining knock of 97 came at a healthy strike rate of 97.98. In his 99-ball knock, the southpaw smashed 10 fours and 3 sixes and pragmatically played against the home bowling attack.

Dhawan led from the front with the bat in hand. He took down Alzarri Joseph right in the first over with a couple of boundaries and then a six in the fifth, and then dovetailed well with Shubman Gill as both stroked a flurry of boundaries and notched up their respective fifties.

Shikhar Dhawan batted beautifully for his 97

Whether it was the pace of Joseph, the movement of Romario Shepherd or the medium pace of Kyle Mayers or the left-arm orthodox tricky of Gudakesh Motie – Dhawan dominated all of them with his attacking shots and had the West Indies fielders frustrated with his quick running between the wickets. And his tempo didn’t change even after Shubman Gill’s wicket and even as Shreyas Iyer batted sedately.

He brought up his half-century off 53 balls and was motoring along nicely in what was a largely chanceless innings, and reached 97 by bludgeoning Motie over cow corner for a maximum. 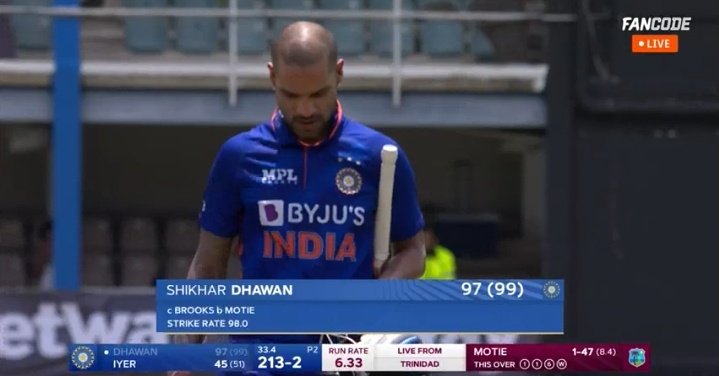 Dhawan aimed to bring up his century with a four by flashing Motie on the off-side however, Shamarh Brooks intercepted the fierce cut from the batsman with an equally stunning dive to take a spectacular catch at backward point.

Dhawan walked back with a sheepish smile on his face, clearly disappointed on missing out on a three-figure score that was there for the taking, and to a standing ovation from the Indian dressing room.

Dhawan, who hit 8 centuries from 2017 to June 2019 the last one being in the World Cup against Australia, has now failed to notch up an ODI ton for more than two years.

However, despite undergoing a century rut, the left-hander has been a consistent run-scorer giving India good starts. Since the end of the 2019 World Cup, Dhawan has scored 942 runs at an average of 49.57 – the second most runs by an Indian batsman and among Indians with over 500 runs in this period, only KL Rahul (54) has a better average than Dhawan.

Fans on Twitter hailed Shikhar Dhawan for his brilliant knock while also expressing sadness for the opener missing his century by only 3 runs.

Dhawan has as many 50+ scores as Sachin in the first 150 innings as ODI Opener.

But somehow, his place is always under question in ODIs.

Fifty for Captain Shikhar Dhawan, playing his 150th innings in ODI, he has 36 fifties and 17 hundreds. Top knock, Shikhar. pic.twitter.com/suv2qqJfgQ

Most Fours after 150 ODI innings

#Quickbyte: In ODIs, Dhawan averages 25.2 in 16 innings while playing in the WI, his lowest in a country. Overall, he averages 32.5 against the West Indies, his lowest against an opponent whom he has batted two or more innings.

Shikhar Dhawan came so close but his wait for a on Carribbean soil in ODIs continues… Also missed out on becoming only the third Indian captain to score an ODI in West Indies…
Virat Kohli has 4 and Rahul Dravid has 1.#WIvsIND

Shikhar Dhawan missed out a well deserving hundred by just 3 runs, end of a great knock from the captain – 97 runs from 99 balls. pic.twitter.com/bfLIjIOQwM

A heartbreak for Shikhar Dhawan – he’s dismissed for 97 in 99 balls, missed out from what could’ve been his 18th century in ODI cricket. What a knock by Dhawan, he’s been an amazing contributor for India in ODIs. pic.twitter.com/0pOJfEDBWS