Back in the ODI eleven after about 17 months, Shubman Gill played an enterprising innings to raise his maiden ODI half-century in the first ODI against the West Indies in what is only his fourth ODI match.

Gill featured in three ODIs across 2019 and 2020 but with only 49 runs in those three innings, he was dropped and wasn’t given any opportunity since with Rohit Sharma, Shikhar Dhawan and KL Rahul occupying the opening slots.

Now with Sharma rested and Rahul injured, the management gave Gill the opportunity to open alongside Dhawan ahead of Ishan Kishan and Ruturaj Gaikwad who are both also in the squad. And the 22-year-old from Punjab grabbed his chance to make a statement of his own with a half-century filled with sizzling and classy and elegant shots, all of which are now his trademark having had success in Test cricket and in the IPL. 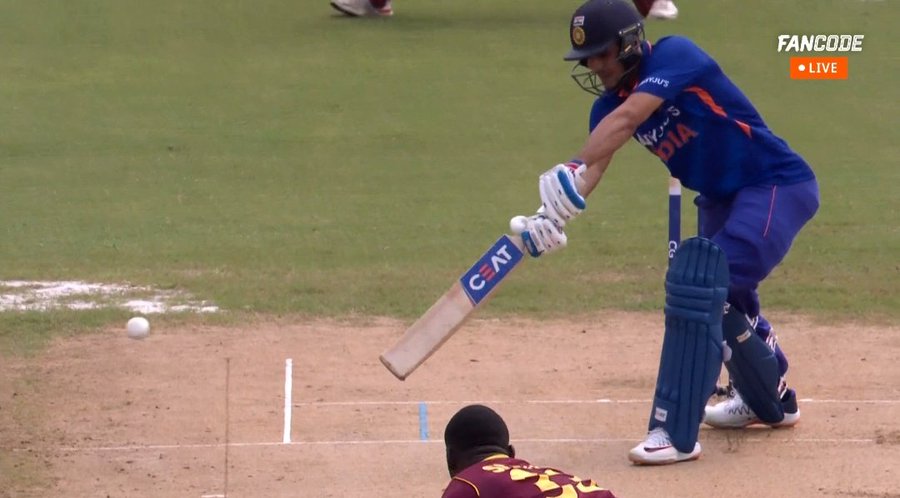 Gill was on his way straightaway, creaming a delightful cover drive boundary on his first, to seamer Jayden Seales. He then took on West Indies’ fastest pacer, Alzarri Joseph, clattering him for a four and six over fine leg before cracking another sumptuous drive through the off-side.

After comfortably ticking along with singles and doubles for a while, Gill nailed a flick and a cut, both racing toward the fence, off Seales as his partnership with Dhawan grew in numbers and confidence.

Medium pacer Kyle Mayers was treated disdainfully by the young right-handed opener who took a couple of fours off Mayers, before thumping inexperienced left-arm orthodox Gudakesh Motie down the ground for his second six.

An easy single tucked on the leg side off Mayers brought up Shubman Gill’s first landmark in ODI cricket and he received a warm round of applause from the Indian dressing room. By the end of the 14th over, Gill and Dhawan had notched up their century stand to keep India in cruise control.

Fans on social media were delighted to see Shubman Gill flourish in the 50-over format, which was perhaps expected given his talent, temperament and sound technique.

Here are some of the best tweets hailing Gill’s maiden ODI half-century:

Can’t wait to see Gill and Shaw opening in ODIs together in the future, powerhouse opening partnership

Here to watch Gill notch his first ton in his strongest format.

Maiden ODI fifty for Shubman Gill, he has bossed the innings so far, 50* from just 36 balls including 6 fours and 2 sixes – many more to come in future. pic.twitter.com/2mpksn1pzw

Fifty by Shubman Gill, a wonderful innings by him. Given an opportunity today and he’s successfully cashing in. pic.twitter.com/4tWhnvfg63

Shubman Gill having fun, completes his half century, first of many.#IndvsWI #CricketTwitter

Waited to see Gill in ODIs since that U19 World Cup. So happy to see him playing a good knock!#WIvIND

This is an exhibition from Gill. What a shot. Exquisite balance even when prancing down the track vs pace.

Gill and cracking the punch on the rise.

Also Read: Shikhar Dhawan Gave A Hilarious Response When Asked About Criticism From Outside